The Specialist Importers Trade Tasting, held in Manchester and London, showcased wine from the independent sector. Much of the line-up included lesser-known grape varieties, in addition to the popular styles. Having done my homework beforehand, I knew what I wanted to try, but I also discovered some new treats, so here’s my personal round-up of a few highlights.

For The Love of Wine had some interesting wines from Italy, in particular, but also France, Germany and Switzerland. Their 2011 Morgassi Superiore Gavi di Gavi was a wine I enjoyed with its stonefruit characteristics and steely elegance. However, one of the more interesting offerings was their 2010 René Favre & Fils Fendant de Chamoson from the Valais region of Switzerland. This is a good example of what the white Chasselas grape, unfamiliar to many UK consumers, can offer. Chasselas, known as Fendant in the Valais, tends to produce light, fresh, dry wines, but can also be fuller-bodied and fruity. This crisp example exhibits a certain finesse with a citrus-like perfume and a hint of nuts and honey on the nose and a fruity, mineral, but slightly creamy quality on the palate. This wine would, of course, make a great accompaniment to a fondue, but another good food match would be chicken, perhaps with a lemon cream sauce.

One of my favourite wine areas of the world is Galicia – in particular, the denominated regions of Rías Baixas and Valdeorras – and I am always on the look-out for good examples of Albariño and Godello, two of Spain’s best white grapes. Burridges of Arlington St. had a good selection on show and their best value Galician wine for me was Alberte Treixadura 2011, a blend of 80% Treixadura and 20% Albariño from the neighbouring region of DO Ribeiro. At £10 a bottle, this is quite a bargain for a wine which shows intense fruity and floral aromas on the nose and a palate of apples, ripe pears and a hint of creamed corn. 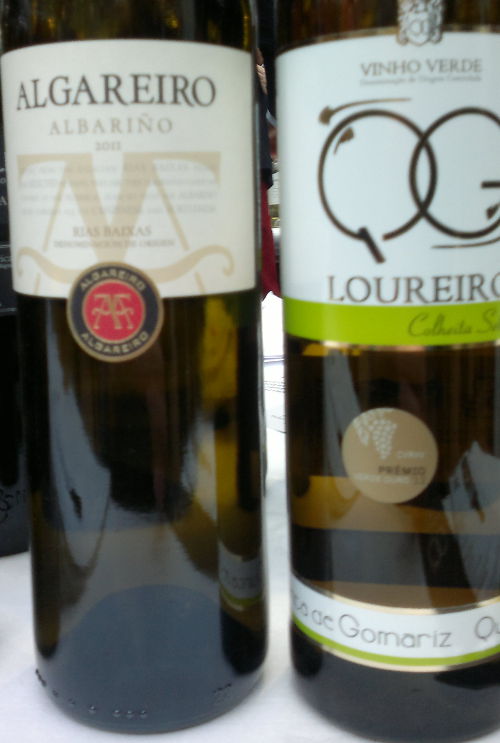 Another supplier that caught my eye, or rather captured my palate, was Richmond Wine Agencies. Their Algareiro Albariño 2011 was dry, fresh and fruity with notes of apple and citrus. However, I loved their Quinta de Gomariz Vinho Verde 2011 from across the border in Portugal. With its refreshing green apple zing and notes of flowers and honey, this is good value at £10.99 a bottle for this style of wine. I also enjoyed their elegant Portuguese red wine, DFJ Vinhos Vega Douro 2009. Full of cherry fruit and spice with soft rounded tannins, this wine can be drunk now, but should benefit from ageing for a further two years. At £8.95 a bottle, this is excellent value for money and would make a great accompaniment to many meat-based dishes.

However, hats off to Indigo Wine for providing an intriguing selection of quality Spanish wines, in particular from the above-mentioned regions. Starting off with their La Liebre y La Tortuga Albariño 2011, this delicious 100% varietal has a fresh, peach-like aromatic finesse on the nose and palate which might have me racing back, like the proverbial hare, for more! Their Coto de Gomariz "The Flower and the Bee Treixadura 2011" has characteristics of apple, honey, citrus and creamed corn, while their Rafael Palacios Bolo Godello 2011 shows tropical fruit and grapefruit notes with a creamy backbone. These are two super examples of aromatic, classy Galician white wine. Indigo Wine also had some more unusual offerings within their portfolio, including the first organic Txakoli from the Pais Vasco that I have ever tasted. With high acidity and a fresh, clean, green apple quality, this would make a great accompaniment for light appetisers and tapas.

One of my main purposes for visiting SITT 2013 was to search out good wines from two countries in particular – Germany and Brazil. Wines of Germany had several Rieslings on show, including a 2011 from Weingut Lorenz & Söhne in the Nahe region, showing clean, apple notes and a crisp minerality and a 2011 from Weingut Lothar Kettern in the Mosel, the wine moving from apple freshness at the start to a waxy quality on the finish. German wine has sometimes struggled in the UK to shake off negative connotations, associated particularly with cheap wine imported in the 1970s, despite the superb quality often available. Some of the most interesting and best German wines at the tasting came from the Baden-Württemberg region in the south, courtesy of Winehaus. This area is the southernmost of Germany’s 13 wine regions, with a generally warm climate and a wide variety of soil types. Winehaus had a superb range of white and red wines on show, so I’ll begin with three whites. The Freiherr Von Goler Riesling Dry 2011 had a herbaceous nose with apples and nuts and a crisp, fruity palate of apples, raisins and a hint of hazelnuts. The Freiherr Von Goler Pinot Blanc 2011 had an aromatic nose of peaches and apples, followed by a palate of similar fruit intensity. The stylish Oberrotweil Pinot Gris Select 2011 had characteristics of apples, lime, nuts and minerality – a delicious find.

Germany’s red wine are becoming better known outside of the country and one grape particularly well suited to the "terroir" of South Germany is Pinot Noir, or Spätburgunder, as it is known in Germany. Often light to medium red in colour, they can exhibit an intense fruitiness on the nose and palate and may be light or fuller-bodied. Starting with two delicious reds from Rheinhessen, the Oberrotweil Pinot Noir Select 2011 was light and fruity, not dissimilar to a Pinot Noir from the Alsace. In contrast, the J Wasem (Julius Wasem & Söhne) Ingelheim Pinot Noir 2011 was also fruity, but fuller-bodied with cherries and fruits of the forest evident on the palate. The same winery’s Pares Pinot Noir 2010, derived from a single vineyard, was a notch further up the quality scale. In addition to the fruity characteristics expected, with a hint of tomato present too, this wine also had a slight vegetal and leafy quality. Although quite young, it can certainly be drunk now and at 14.5% ABV, will stand up well to full-flavoured earthy food such as venison stew, for example. A real treat for me was the Ingelheimer Frühburgunder 2009, a grape related to Pinot Noir but which ripens earlier and is known by many other names, including Pinot Madeleine and Pinot Précoce. Fruity and aromatic on the nose and palate with notes of redcurrants and blueberries, this had a surprisingly long finish. However, I was blown away by the Heitlinger Königsbecher Pinot Noir 2009 from Weingut Heitlinger in Baden.

The wine spent 14 months in oak, in a mixture of 1 and 2-year old barriques and one of the defining qualities for me was just how well-balanced the oak was. Intensely fruity, with berries and currants prominent on the nose and palate, this wine demonstrated fruit, freshness and weight in perfect harmony with soft vanilla overtones provided by the oak ageing. As winemaker Claus Burmeister explained, the iron-rich soils in which the vines grow lend substance to this wine and the result is a beautiful example of a terroir-driven South German Pinot Noir, which would make an unusual alternative to a Burgundy red. As mentioned above, German wine has often suffered in the UK from an image problem, but the fresh, modern labelling on all these wines could help endear them to a sometimes sceptical market.

…And now for something completely different! With the World Cup and the Olympic Games coming to Brazil, the country is well and truly in the spotlight. So, there’s never been a better time to become more acquainted with its wines. Wines of Brazil offered a fascinating selection of white and red, still and sparkling wines. I began my tour with Casa Valduga Domno Ponte Nero Brut NV, a sparkler made by the Charmat method, which is often used for production of Italian sparkling wine. Fresh, fruity and delicate with notes of green apple, it was a refreshing start to a very interesting tasting. The Miolo Brut Millesime 2009, made using the Méthode Champenoise, was unsurprisingly fuller bodied with tropical fruits and buttery notes. 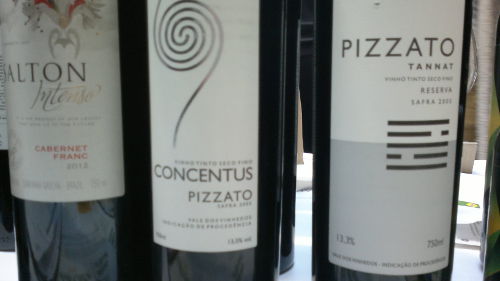 For me the red wines were the most impressive, in particular their expression of the Tannat grape variety. Most famous as a deeply-coloured highly tannic wine from Madiran, South-West France, Tannat is also being grown to great effect in South America, particularly in Uruguay and now Brazil. The Basso Monte Paschoal Tannat Virtus 2011 is a dry red wine with a nose of berries and spice plus an earthy, smoky quality continued on the palate with a savoury, smoky aftertaste. At £8.50 a bottle, this is good value and would make a great pairing for barbecued food or for Tandoori and Shashlik dishes. The fuller-flavoured Pizzato Concentus 2005, a blend of Tannat, Merlot and Cabernet Sauvignon, was deeply concentrated with notes of blackberries and smoke on the nose and palate and a smooth aftertaste of coffee and chocolate. The Pizzato Tannat 2005 was similarly elegant, with aromatic fruit and spice notes and well-balanced tannins. I also enjoyed two other single varietals. The Lidio Carraro Agnus Merlot 2011 was aromatic and fruity with notes of strawberries and violets, while the Salton intense Cabernet Franc showed blackberry and spice notes, a hint of tomatoes and soft tannins. These wines are meant to be drunk with food and like many South American red wines would go well with red meat.

Brazil clearly make some great "food wines" and the Tannat grape is a worthy pairing for meat-based dishes, with or without a rich sauce. However, perhaps the Brazilian wine industry should take note of their South American neighbours, if they want to gain a firmer foothold in the UK. Chile with Carmenère and Argentina with Torrontés are actively promoting their wines in the UK as good matches for strongly-flavoured food, particularly curry (see my review on South American wines for further details). A fresh, Brazilian Muscat could be a good match for food flavoured with lemongrass, ginger, cardamom or other aromatic spices. A Brazilian Tannat could make an interesting alternative to an oaked Carmenère when paired against barbecued or spicy meat dishes, particularly food cooked in a tandoor oven, for example. I look forward to my next experience of Brazilian wine – Saúde!