I recently attended the Wines of Chile and Wines of Argentina Annual Trade Tastings at Lords Cricket Ground. The two countries offer a rich diversity of wine styles worth discovering, as well as strongly supporting Fairtrade wine production. Before offering some highlights, here’s a little bit of background information to both countries’ wine traditions.

Chilean Merlots and Chardonnays have often been regarded as 'safe choices', particularly in UK restaurants, for their smooth, fruity styles. This is certainly often true, but there is so much more to discover. The country’s geographical and climatic variations allow many white and red grape varieties to grow successfully here. Cool breezes from the Pacific and the natural barrier of the Andes mountains mean that grapes like Gewürztraminer, Sauvignon Blanc and Riesling, which prefer a cooler climate, can retain intense fruit-driven characteristics. Other grape varieties also thrive, benefiting from the sunny days, cool nights and diverse soils, including the increasingly acclaimed fruity and spicy Syrah and the berry fruit and black pepper-like Carmenère. The latter is often marketed in the UK as a good pairing with curry due to its aromatic fruitiness and the fact that it can be oaked to give smoky vanilla notes, particularly good with Tandoori dishes, or unoaked to enhance the fragrant food spices, like cardamom.

Like Chile, Argentina has a wide range of topographical features, climates and soils. The Andes provide water to irrigate the otherwise mainly arid terrain and many vineyards are planted on huge, high-altitude terraces. The country burst into international wine recognition by transforming Malbec, a Bordeaux blending grape, into a stand-alone grape capable of making top quality wines. It typically gives rich black and red fruit flavours often with a savoury character and vanilla, spice and tobacco notes from oak ageing. However, in the last 20 years, Argentina has also focused increasingly on other high-quality grape varieties suited to its own terroir. For example, Torrontés, which is becoming increasingly better known and even fashionable, is Argentina’s most distinctive and possibly best white grape variety. It is related to Muscat of Alexandria, so you can expect highly aromatic and fruity wines – another potential curry match. (Recently many wine people seem to have become obsessed with matching wine to curry in the UK and there is no doubt that the fruity Carmenère and Torrontés definitely have a place.)

So let’s start with four Chilean whites – two Sauvignon Blancs and two Chardonnays. Montes Outer Limits Sauvignon Blanc, 2011 has a subtle gooseberry and apricot nose, matched equally on the palate, while Veranda Sauvignon Blanc, 2010 offers an aromatic stone fruit nose with lemon, gooseberry and stone fruit complexity on the palate. Two beautiful examples of a new world Sauvignon Blanc. Tamaya Reserve Chardonnay, 2010 is a fruity style of Chardonnay with tropical fruit aromas and a palate of melon and pineapple with some minerality, while Santa Ema Reserve Chardonnay, 2011 has ripe tropical fruit and subtle vanilla/toast aromas from the oak ageing and a long fruit-driven finish.

On to reds now and Pinot Noir is a very sensitive grape variety, requiring the right soil, climate and careful winemaking/nurturing skills. At the Chilean tasting in particular, I was hoping to be bowled over by some world-class Pinots. Unfortunately, most of the examples I tried felt too unbalanced – the fruit often masked by chocolate, vanilla or coffee aromas and tastes from oak ageing, in addition to the alcoholic strength. However, two of the better examples were the Reserve Pinot Noir, 2009 from Viña Lauca and the T.H. Pinot Noir Leyda, 2011 from Viña Undurraga. While clearly demonstrating oak, these wines still retained decent fruit. Among the other reds, Cono Sur 20 Barrels Limited Edition Syrah, 2009 was a delicious find. An aromatic fruity nose leads on to a beautifully balanced palate of bramble fruits, chocolate and black pepper – catch it while you can!

However, I wanted to highlight two wineries for their overall standard which stood out for me. Viña Casablanca is particularly renowned around the world for its white wines and the two I tried did not disappoint. Their Nimbus Single Vineyard Sauvignon Blanc, 2012 is a delightfully fresh, clean and crisp wine with an aromatic nose and well-balanced acidity on the palate with subtle notes of stone fruit and gooseberries. The Nimbus Single Vineyard Gewürztraminer, 2011 has an intensely aromatic nose with stone fruit, citrus and a little spice on the palate – a complex wine and a real find. My only regret is that I did not try their other white wines! Also worth mentioning is their Nimbus Single Vineyard Pinot Noir, 2010 which, like the other Pinots mentioned above, retains its fruity characteristics. An aromatic, yet earthy nose is followed by plum and chocolate flavours – definitely one of the more successful examples on show of this difficult grape variety. 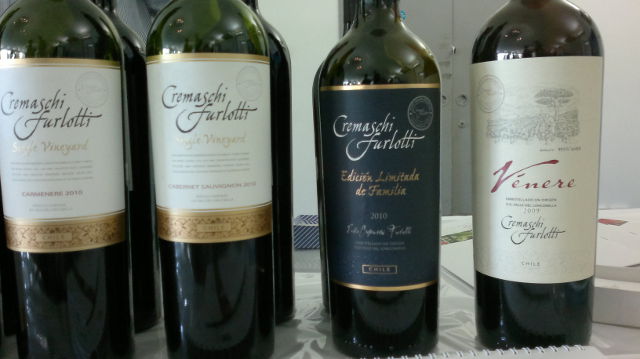 My favourite Chilean winery at the tasting has to be Cremaschi Furlotti. A family owned company, based in the Maule Valley, one of the Central Valley regions, about 150 miles south of Santiago, they produce a range of wines of excellent quality and value. Their Sauvignon Blanc Reserva, 2012 is crisp, floral and delicate on the nose and palate and would go beautifully with Thai cuisine. However, their reds really stood out for me and top of the bunch was Vénere, 2009. Made from a blend of Carmenère (60%), Cabernet Sauvignon (20%) and Syrah (20%), this wine with an enticing deep, ruby red colour has a complex array of aromas and flavours. Intensely aromatic with chocolate, spice and black fruit notes, the palate has a creamy chocolate finish on a background of fruit and spice and packs a powerful punch. Their Family Limited Edition, 2010 is also a blend, this time containing 60% Cabernet Sauvignon and 20% each of Syrah and Carmenère. The aromatic red fruit nose leads on to a palate of cherries and chocolate and well-balanced tannins – another complex wine. I also liked their Carmenère Single Vineyard, 2010 which would go perfectly with spicy sausage or other intensely flavoured, spicy or smoked food. Plum and black pepper aromas are accompanied on the palate by plum, cedar and chocolate notes. Lastly, their Syrah Single Vineyard,2010 is worth a mention, as it exhibits some of the more subtle spice/peppercorn and ripe fruit notes which this classic grape is capable of with good handling. As of writing, their wines are not yet available in the UK, but I hope this changes very soon!

So now on to Argentina and let’s start with the white wines. I mentioned earlier the Torrontés grape variety and a good example is the delicious Raza Signature Series Torrontés 2011 from La Riojana, the world’s largest producer of certified Fairtrade organic wines. Intensely aromatic with tropical fruit flavours and a good finish, this is a crisp, refreshing wine that could be drunk on its own or with a light meal, especially spicy food again. Another white wine made in the same region of Los Valles del Famatina, an 80km-long desert valley surrounded by mountains, is Dominio Del Plata’s Zohar Fiano 2012. Aromatic, fresh and crisp with citrus fruit on the nose and palate, this traditional Italian grape from Campania is fast becoming another trendy varietal and has found a delightful expression in this Argentinian wine. Another fashionable white grape variety is Verdelho. Originating from Portugal, it has become increasingly popular in Australia, but is rarely grown in Argentina. However, Don Cristóbal Cristóbal 1492 Verdelho 2012 is fresh, fruity and floral with notes of citrus, peach and melon – a good example of modern, forward-thinking 'New World' winemaking.

As mentioned earlier, Malbec is Argentina’s best known red grape, but one lesser known variety is Petit Verdot. Another formerly traditional Bordeaux-blending grape, it was often used to add depth of colour before many vines were uprooted, but has more recently been revived in the New World as a stand-alone varietal. Swiss-owned Finca Decero Decero Mini Ediciones Petit Verdot, 2010 has a salty tang to complement the ripe fruit and would benefit from ageing to bring out greater complexity. In fact, the 2009 vintage has been voted as 'Wine of the Year' by the Argentinian wine industry, so it will be interesting to see how this wine fares over the next couple of years. An award-winning blend of Malbec (80%) and Cabernet Sauvignon (20%) is Pascual Toso Finca Pedegral Single Vineyard 2006. With cherries and spice on the nose and palate and a creamy mocha-like finish, this is a complex food wine to match beef dishes in particular and is ready for drinking now.

Finca Sophenia produce a selection of top class wines. Vineyards are planted 4000 ft. high-up at the slopes of the Andes, so with plenty of sunshine during the day and cool at night, the fruit aromas and flavours are allowed to develop and this comes through in all their wines. Their Es Vino Malbec Rosé 2011 is a fresh and fruity rosé which could be drunk as an aperitif or successfully complement spicy food. Their excellent Sophenia Synthesis Malbec 2009 demonstrates perfectly integrated black cherry and spice notes with well-balanced tannins. The highly complex Sophenia Synthesis The Blend 2008, which has earned numerous accolades, has 70% Malbec, 25% Cabernet Sauvignon and 5% Merlot. Long ageing in French oak adds vanilla, chocolate and woody notes to rich fruit and spice on the nose and palate. Classy-looking bottle labels too. 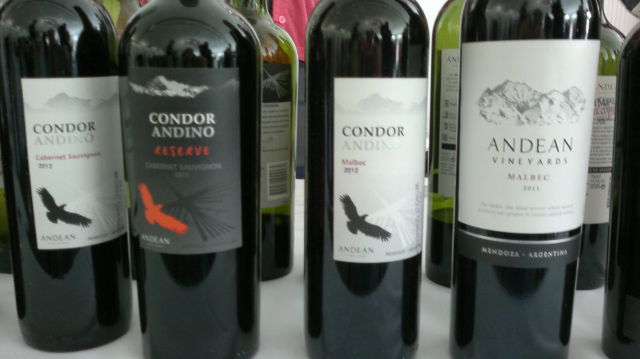 However, some of the best value Argentinian wines I tasted were from Andean Vineyards and two whites and two reds stood out for me, all in the £6-£8 category. Their Andean Vineyards Chardonnay Torrontés 2011, with 20% Torrontés, has beautifully balanced acidity to complement the aromatic citrus aromas and fresh, lemon and lime flavours. In contrast, the Condor Andino Reserve Chardonnay 2011 has pear and melon aromas and a fuller-bodied palate of pear, vanilla cream and biscuit. The Andean Vineyards Malbec 2011 was soft and velvety with ripe fruit scents and flavours not overpowered by the oak ageing and, although not yet at its peak, would go brilliantly with a barbecue. Lastly, the Andean Vineyards Shiraz 2011 won the Argentina Shiraz Trophy and is a good example of a well-made modern Shiraz. A fruity nose with hints of red pepper and spice is complemented by a similar palate of red and black fruits with integrated tannins. These wines should appeal to all wine drinkers in terms of price, quality and style and are available in the UK from Winery Exchange.

Chile and Argentina aspire to be taken seriously as producers of fine wine. They still have some way to go to raise standards in general, but at their best are already capable of superb wines. Argentina is justifiably proud of its Malbec and Torrontés, in particular, while Chile is improving its ability to produce fine wine in addition to the good-value wine for which it is known. Also, it is spearheading a comprehensive sustainability program and in 2011, Chile developed a Sustainability Code with 3 unique and distinct components. These govern environmentally and economically sustainable methods of wine production and also social responsibility. By the end of next year, it is estimated that greater than 50% of Chile’s wineries will be certified as 'Sustainable'. However, one last word on South America. With Rio 2016 on the horizon, expect Brazil to start making waves on the wine scene. In fact, this has already started, with the UK being the second largest buyer of Brazilian wines after China, so watch this space…!