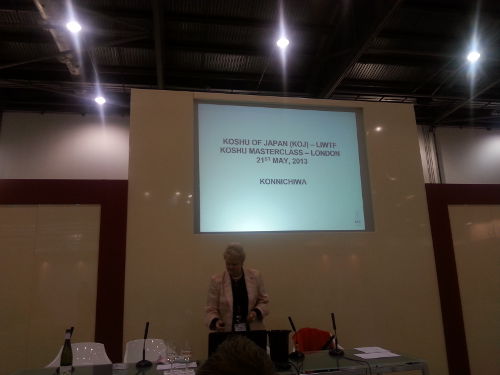 The annual wine fair in London, held this year on 20th to 22nd May, had its fair share of delights and surprises. Here are just a few of my highlights…

Germany
Strangely, the only dedicated representation that Germany had was from South Germany. Perhaps the fair was too soon after Prowein??? Fortunately, Winehaus always stocks a superb selection of excellent-quality wines and they also hosted some tutored tasting sessions. I’ve featured several of their red and white wines before, so this time, how about a couple of rosés? 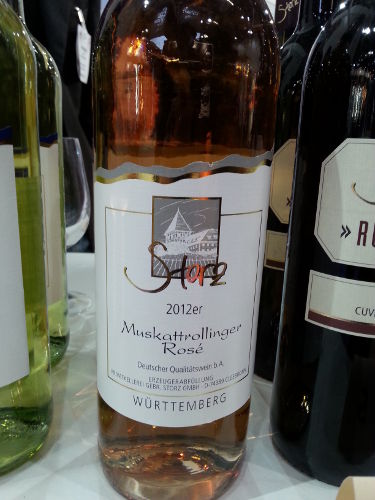 Weingut Storz is a privately-owned producer in Württemberg. Their £7.40 Muskat Trollinger Rosé 2013 is fantastic value for money. A pale orangey pink colour makes this stand out visually. An intensely fragrant and fruity nose, reminiscent of nectarines and flowers is followed by similar notes on the palate with a crisp, fine acidity - 19g of residual sugar heightening the fruity mouthfeel. This wine would make a perfect accompaniment to Asian noodle dishes. In contrast, Weingut von Franckenstein’s Spӓtburgunder Rosé Trocken 2012 is full of strawberry and spice aromas and flavours with some salinity on the finish. A great pairing for this wine would be sushi or BBQ food.

Portugal
Oakley Wine Agencies had an impressive selection of wines, including those from Companhia Agrícola do Sanguinhal’s three estates - Quinta do Sanguinhal, Quinta das Cerejeiras and Quinta de S. Francisco. The inky-coloured Quinta de San Francisco 2009 is full of ripe red and black berry fruit with well-balanced acidity and tannins. In contrast, Quinta das Cerejeiras Reserva 2008 has characteristics of game and meat juices, while the 100% Aragonês Sanguinhal red demonstrates notes of black fruit and gentle spice with hints of coffee. 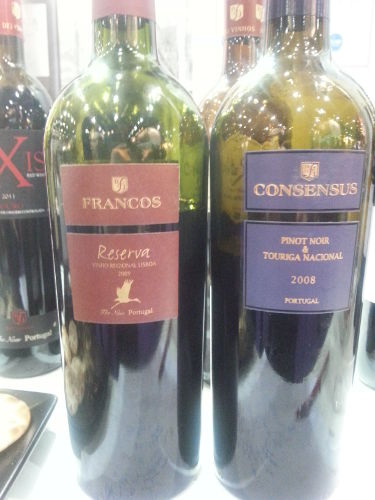 DFJ Wines’ superb selection includes Consensus 2008, an equal blend of Pinot Noir and Touriga Nacional. Rich, fruity, spicy and elegant with gamey notes on the mid-palate, this is another example of good value Portuguese wine at only £12 a bottle. Francos Reserva 2009, made from Touriga Nacional, Touriga Franca and Alicante Bouschet, has red berries and cloves on the nose, followed by fruits of the forest and spice on the palate. I think another two years will bring out further elegance in this wine.

One of the most underrated drinks around has to be Madeira. Thanks to an eminent wine educator and sommelier, I was introduced to two simply stunning examples that should convince any doubters of the elegance, sophistication and sheer deliciousness of which Madeira is capable. 1954 is renowned as a top year, not just because of Ernest Hemingway winning the Nobel Prize. Vinhos Justino Henriques (VJH) 1954 Verdelho is an outstanding medium-dry Madeira with notes of orange peel, caramel and toffee immediately obvious, but nuts, spice and citrus acidity come through as well. Jumping forwards 10 years, VJH Boal 1964 is a rich, medium-sweet style of Madeira with primary notes of caramel, butterscotch, treacle, dates and figs. If anyone wants to buy me a birthday present for next year – hint, hint …

Brazil
I wrote about Brazilian wine in a previous article, so I wanted to try some more wines from this country at the LIWF. There were plenty of sparkling Muscats, unsurprisingly, but I was particularly interested in the range of red wines on show.

Lidio Carraro, the producer for the FIFA World Cup 2014’s licensed wine, has an interesting range, including Elos 2009, made from Touriga Nacional and Tannat. An intensely aromatic nose of maraschino cherries, violets, cloves and spice leads on to a palate of black fruit and Christmas spices with hints of coffee and chocolate. Their elegant Lidio Carraro Merlot 2006, made from separate plantings of Merlot specifically reserved for this range, has notes of plums, spice and vanilla with hints of mint. The complex Lidio Carraro Quorum 2006, made from Merlot, Cabernet Sauvignon, Tannat and Cabernet Franc, has an intensely aromatic and fruity nose of plums and cassis with a savoury quality too. On the palate, there are similar characteristics with the addition of chocolate and coffee notes. These wines are available from Go Brazil Wines & Spirits.

Miolo Wine Group has some supremely elegant wines. Their Quinta do Seival Castas Portuguesas Safra 2008, made from Tinta Roriz and Touriga Nacional, has typically intense and fruity aromas with gentle black pepper and spice notes plus hints of chocolate. On the palate, there are similar characteristics with a pleasing cherry and spice-like finish. Their Merlot 2009 is full of plums and gentle, well-rounded Christmas spice notes, while the Lote 43 2011 from 40% Cabernet Sauvignon and 60% Merlot has a beautifully enticing deep purpley red colour, an intensely fruity nose with hints of black pepper and cloves, followed by a fruity and spicy palate. This wine is still young, so should develop well over many years. The Tannat 2011 has black fruit and cloves on the nose, followed by plenty of fruit and gentle spice on the palate. All these well-made and stylish wines would complement many meat dishes, including BBQs. Miolo wines will be available from Bibendum Wine Limited. 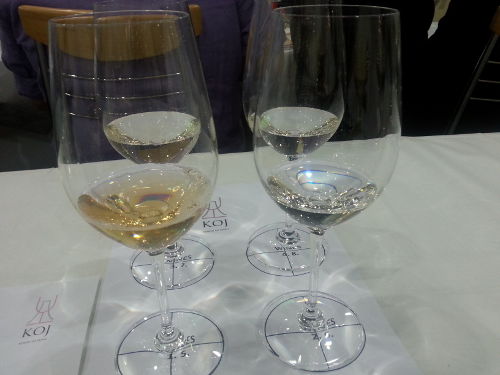 Japan
The first masterclass I attended was given by Lynne Sherriff MW on Koshu, the indigenous grape of Japan. I had already tried wines from this variety a few weeks previously at The Emerging Regions Wine Tasting. With plantings in the vicinity of Mount Fuji at a latitude similar to Southern Spain, the climate is extreme with monsoons during the growing season. However, the wines tend to be delicate, refreshing, crisp, slightly savoury and with a firmness largely attributable to the high natural tannins present in the tough, thick skins. We started off with the 2010 Lumiere Sparkling Koshu with aromas of apple, white peach and thyme and a palate of apple, herbs, peach and minerality with light savoury notes on the finish. Two particularly interesting and contrasting still whites were the 2010 Soryu Koshu and the 2012 Rubaiyat Koshu. The former has a delicate nose of white peach and lemon rind, while the slightly tannic palate exhibits hints of white peach with lemon and lime acidity and light minerality. The second of these two has a particularly floral nose with notes of white peach to the fore once more. On the soft rounded palate, stone fruit again defines the prominent flavours with notes of peach/apricot kernel on the finish. These wines would go really well with delicate food, particularly and unsurprisingly Sushi. Lynne’s relaxed and informative tasting was a pleasure to attend and I look forward to trying more Koshu wine in the future.
South-West France
Last but definitely not least, I went to Tom Cannavan’s and Joanna Simon’s superb "50 Shades of Black" masterclass, focusing on the delicious Malbecs of Cahors. Out of the six we tasted, I particularly enjoyed two very different expressions of this late-ripening variety from 2009, one of the best vintages. The Malbec grapes used to create Le Clos Troteligotte Cahors K-or 2009 come from a walled organic ‘clos’ vineyard on red clay-limestone ‘Siderolithic’ soil. The wine spent 24 months in concrete vats with no oak, making this an entirely different style from many of the Malbecs we are accustomed to, especially those from South America. The result is fresh, savoury and spicy with loads of juicy ripe fruit and a touch of smoke on the nose and palate and some minerality too. Although you could drink this now, perhaps it could benefit from a few more years in bottle. In complete contrast and with 24 months ageing in new French oak, Domaine La Bérangeraie La Gorgée de Mathis Bacchus 2009 smacks you in the face with a fruit-filled kiss. At 15.5% ABV, this is a powerful, densely-coloured and beautiful wine with plums, cherries, chocolate and vanilla on the nose and a bucketful of black fruit and kirsch on the palate. Despite this being such a big wine, the finish is fresh, elegant and harmonious – terrific and a great way to conclude my round-up.
Copyright © 2020 All rights reserved by Robin Goldsmith E&OE
Design based on Wpfreeware.com & TemplateMonster templates
Beer droplets image designed by upklyak / Freepik