A Taste of Brazil 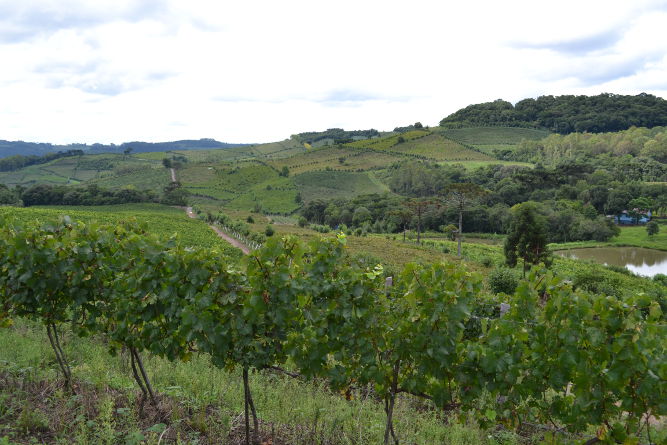 And the final whistle blows. The England football team has won the 2014 World Cup. There is also world peace, an end to poverty, a cure for the common cold and some priceless Roman artefacts have just been discovered in my garden. Oh – before I forget, I've won an all-expenses paid trip to the Galapagos Islands and with my homebrew kit, have created the world's best beer according to international beer critics.

OK – so time for a reality check. We can all dream, right? … and that's the fun of the World Cup. Rational thought goes out of the window (along with crates of lager), grown men cry out of joy or sadness and pubs' profits rise as vast quantities of beer, crisps, peanuts and other bar food are consumed during a crazy 31-day period. If you're anti-social, you could hibernate at home, having stocked up the fridge with 50 cans of beer plus one carrot for a health moment. Alternatively, leave your family and stay for a month with that useful friend who owns a state-of-the-art 55'' TV set with picture clarity so sharp it could cut through your ice bucket.

Chances are that wherever you may be, you'll be drinking your normal tipple, be it lager, real ale, craft beer, spirits, wine, water, Caipirinha, orange juice, or whatever. However, for those of us not living in South America, Brazilian wine may be a completely novel concept. How many people know that there is such a thing? Well, if you're planning to immerse yourself, quite literally, in the spirit of the occasion, then why not enjoy a taste of the country that is hosting this football spectacular and have a glass or two of vinho do Brasil? It's time to "wake up the Brazilian in you" and enjoy!

So far, Brazil has won the football world cup a record five times. No other country can match this and the country is unsurprisingly among the favourites to lift the trophy once again. However, well before this competition was invented, the country had been producing wine, beginning and not quite succeeding in the 16th Century, before being resurrected by Jesuit priests for religious purposes in the 17th Century. The big turning point came at the start of the 19th century, when the Portuguese royal family lifted a previously enforced ban on winemaking and over the next 200 years, European influences have helped shape and modernise the country's wine industry. It is now the fifth largest wine producer in the southern hemisphere with 1,162 wineries and a yearly output of 330 million litres, according to Wines of Brasil. 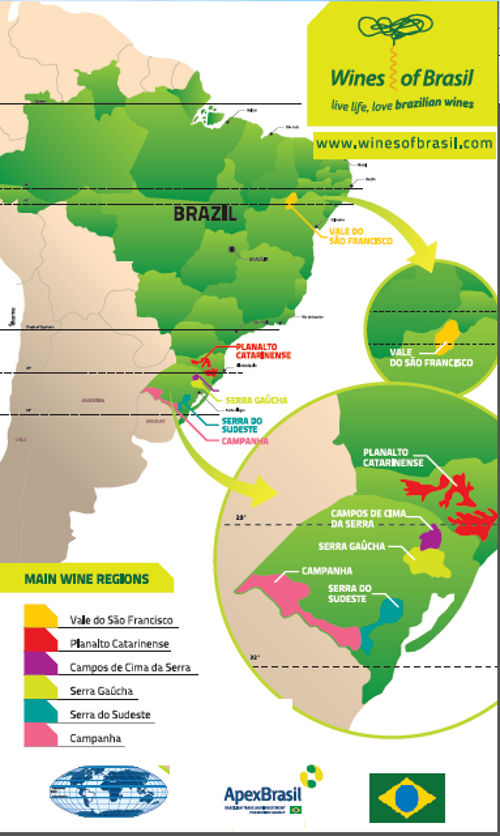 Map of Brazil wine regions reproduced with permission from Wines of Brasil.

Brazil enjoys a variety of climates and soils with 98% of the plantings in the south, mostly in the state of Rio Grande do Sul. The heartland of Brazilian wine is located there, in Serra Gaúcha, Brazil's largest wine region, which accounts for nearly 85% of the country's fine wine production. The remaining 2% of vineyards can be found much further north in the eastern state of Vale do São Francisco, a semi-arid tropical river valley located approximately 1000km south of the equator, which produces two grape crops per year. The majority of Brazil's wine regions lie at an altitude of over 300m above sea level and benefit from the cooling breezes coming in off the Atlantic Ocean. The vineyards of Serra Gaúcha, for example, are between 450 and 750m above sea level, whereas altitude in the newest, highest and coldest region of Planalto Catarinense, in the state of Santa Catarina, can reach 1400m. It is here in the "Highlands" that ice wine is sometimes made.

Sparkling wines are a real speciality of Brazil, in particular lower alcohol versions made from Moscato. Both the traditional and Charmat methods are used in the production of sparkling wine, but the combination of misty mornings, hot days and cool nights is particularly good for Pinot Noir and Chardonnay, so traditional method sparklers made from these grape varieties are also popular.

Two companies which have seen success are Basso Winery and the Garibaldi Winery Cooperative. Basso can trace its roots back to the late 1800s when the family arrived in Brazil from Italy. In 1940, they used Italian equipment and know-how to build their winery in the city of Flores da Cunha in Serra Gaúcha and today produce over 9 million litres of wine from 10 hectares of vineyards. The company also operates in two other regions of Rio Grande do Sul - Serra do Sudeste and Campanha. Garibaldi Wine Co-operative was founded in 1930 by farmers of Italian descent and has won several national and international awards. The winery is based in the city of Garibalidi, also in Serra Gaúcha, with associates in 12 different cities. Annual production is 12.5 million litres of wine from 850 hectares of vineyards.

OK, so you're going to watch the World Cup with friends at home and you'd like to have some wines to suit the mood, the occasion and to offer an alternative source of alcoholic imbibement for non-beer drinkers. Given that you may want to drink more than one glass, it makes sense to drink a lighter style of wine and a relatively low alcohol Moscato would be a good, thirst-quenching, summer-time option while watching both the football and, as every fan knows, the even more important pre- and post-match analysis. There are many excellent, complex and heavier style wines which would suit a serious meal, but I want to focus more on good quality, lighter wines, which might just stop your guests from tripping over the dog.

Basso Winery's Monte Paschoal range includes the Espumante Moscatel (sparkling Muscat), made using the Charmat method. Light, sweet (80g/l sugar), fruity and intensely aromatic, this exhibits characteristics of peach, pear and apple with floral notes too. At 7.5% ABV and served chilled, this is a versatile style of wine – good for drinking on its own or with light party food, including spicy snacks, fruit or desserts.

The Virtus label from the Monte Paschoal range encompasses a competitively priced selection of still wine. Staying on the Muscat theme, the Virtus Moscato 2012 (12.5% ABV) is fresh, dry and aromatic with flowery and fruity notes plus a fresh, lively acidity. This is an easy-drinking wine which would complement lighter food, particularly fish dishes, or should please the "don't have time to eat while watching the footie, but don't like drinking anything sweet and heavy" brigade who prefer a drier style

A couple of reds now – Virtus Merlot and Virtus Tannat, both from the 2011 vintage, unoaked and with an alcohol content of 12.5% ABV. The former has light, fruity notes of plums and berries plus a hint of coffee which carries over on to the finish. The latter, unlike many powerful and heavy Tannats, is light with plenty of juicy fruit, spice, hints of chocolate and supple tannins. This would be great with BBQ meat. 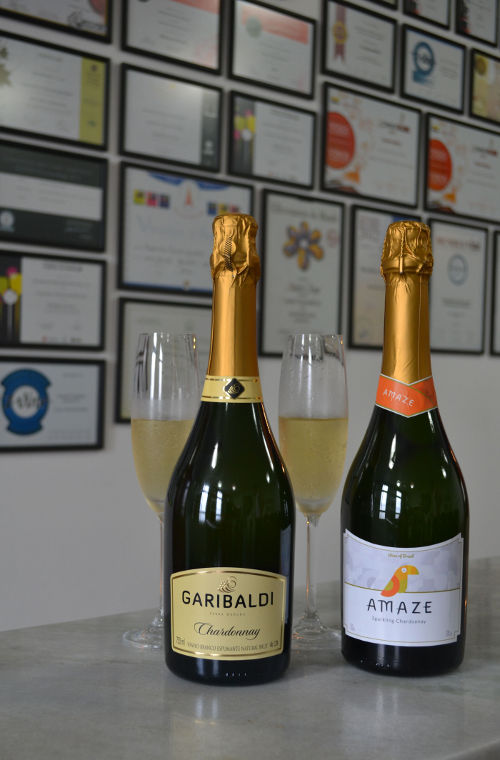 Amaze is a Brazilian word meaning surprise or astonish, but there is nothing surprising about the quality of wine that can now be found in the country. Garibaldi Wine Co-operative is one of the five largest producers of Brazilian sparkling wine and, as part of their colourfully-packaged Amaze brand, they have produced a Sparkling Chardonnay (13% ABV), made according to the Charmat method, with 6-months' lees ageing. Delicate fruit aromas with hints of toast, followed by a fresh and creamy mouth feel, make this a classy way to celebrate your team's success! The unoaked Amaze Tannat (12% ABV) exhibits notes of dark fruit, chocolate and mint – another great option faor the BBQ.

Both wineries mentioned here offer other wines too. The exclusive UK distributor is Oakley Wine Agencies, while Aragoso Corp is the US distributor for Basso.

According to Wines of Brasil, the UK ranks as the top export market for Brazilian wine over the first four months of the year, having seen an increase in sales by over 200% during this period, compared to the whole of 2013. Spurred on by the World Cup, but with the Olympics also on the horizon, the appeal of Brazilian wine fits in with a more adventurous outlook on food and drink generally in the UK. Let's hope the football is equally adventurous and may the best team win!

All images were provided by the wineries mentioned through Oakley Wine Agencies, unless otherwise stated.