The versatility of beer for food pairings!

…Marston's and 26 Grains show the way… 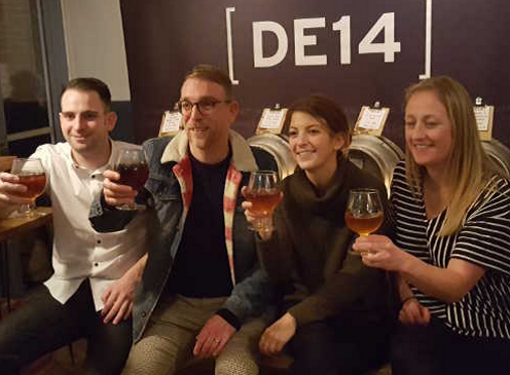 Marston's and 26 Grains collaborate on food and beer pairings

In the previous article on these pages, I wrote about a press trip to Norfolk to learn about the relationship between Marston's and Holkham Estate and how the North Norfolk terroir is ideally suited to the production of malting barley, such as the Flagon winter variety used in some of Marston's beers. Enjoying a range of brews with food specially made for the occasion, it was evident how high-quality ingredients, including malting grains, can impart an array of flavours ideal for matching with many dishes. The beers sampled included some from the Midland brewery's innovative new nano-brewery, DE14, located within their main site and named after their Burton postcode, which allows brewers to experiment with different cereal grains to produce a series of small batch cask ales.

Brewer Adam Fletcher believes that these beers can "develop in complexity with time in bottle, gaining carbonation and mouthfeel" and that the ingredients used deliver carefully considered and balanced flavours "without too many dominant notes". Additionally, the pioneering home brewer club hosted by Marston's has been such a success leading to one beer, Morgan Silk Grapefruit New England IPA, being brewed at DE14 and then sold at the Utoxeter beer festival and in local Burton and East Midland pubs. With limited production, nano-breweries offer realistic opportunities to take risks, reflecting the avant-garde nature of both modern homebrewers and the craft brewing phenomenon. Marston's is at the forefront of this trend and their ever-changing DE14 range is testament to their willingness to try new flavour combinations.

A couple of weeks after the Holkham press trip, Marston's held another event, showcasing the versatility of their DE14 cask ales with a selection of canapés at 26 Grains in London. Born out of an exciting collaboration with Alex Hely-Hutchinson, owner and ingredients supremo at this wonderful Scandinavian-inspired Covent Garden café that specialises in porridge, the following pairings were served:- 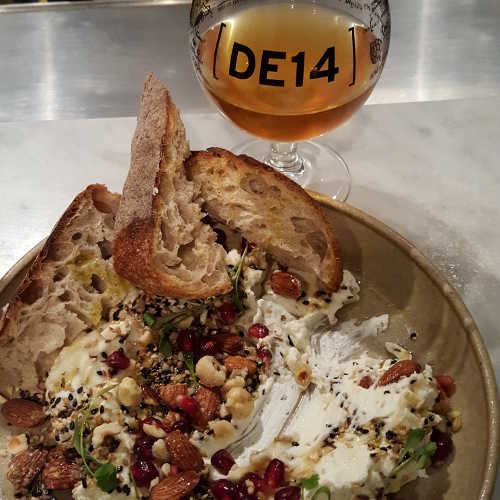 Mediterranean freekeh and roasted green wheat add a delicate ginger-like complexity to a grist where the only other grain is British Pale Ale Malt. The subtle fruity aromas of apricot and citrus, interlaced with spice are provided by a new UK hop variety called Ernest. Pomegranate Molasses are added late in the boil to give a pleasant tart-like finish.

The sweetness in this delicious beer matched the honey in the dish, but the richness of the Labneh cheese would perhaps have benefited from an extra citric tang to cut through the creamy mouthfeel. 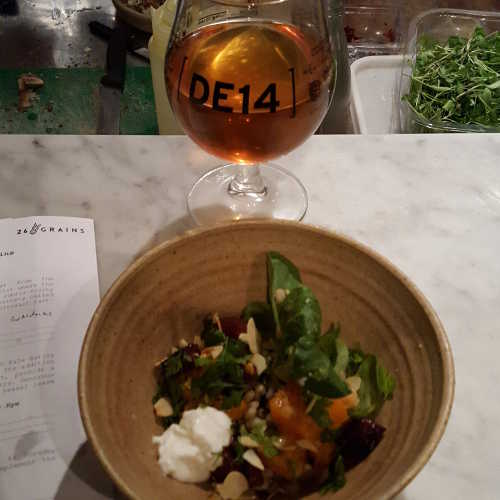 This smoked ale is brewed with a healthy proportion of oak-smoked wheat, which gives a restrained but evident smoky character. Munich, Cara and Crystal malts complete the grist to deliver delicate and complex maltiness, while UK honey and Goldings, Sovereign and Progress hops provide an earthy, sweet, honey-like finish.

The earthy, nutty and smoky flavours in the dish beautifully complemented the smoky character of this ale, while the soft, honey notes married perfectly with the goats curd and almonds. 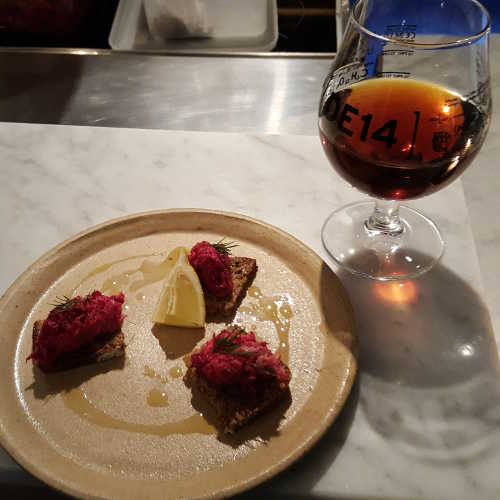 The complex toast and spice flavours in this rye beer paired extremely well with the tangy, dark rye bread, while the fruity hop notes balanced the sweet and sour nature of the pickled beetroot with fish. A hint of milky coffee and chocolate on the finish, due to the use of chocolate malt in the brew, added a further softening touch to complement the nutty richness and sweetness of the dish. 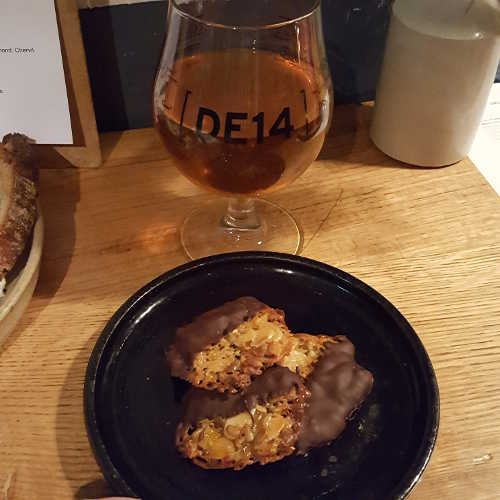 This cloudy pale ale contains Centennial and Citra hops, which provide tropical fruit aromas to complement the coconut notes of the fig leaves within a gentle sweet, malty flavour profile.

The smooth, creamy character of the oats and the herbal, coconut notes of the fig leaves combined harmoniously, producing a very moreish brew! The beer softened the spice and tangy fruit flavours of the Florentines, although I found the dark chocolate and ginger of these delicious biscuits slightly overpowered the beer's subtle character. 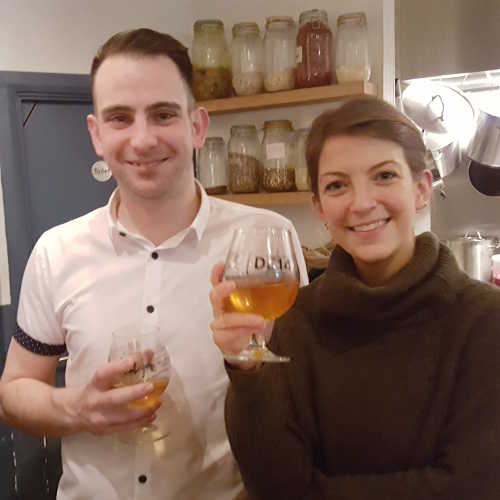 These combinations and the others discussed in my previous article show how versatile beer can be for food matching, but it's also clear how it's not just hops that deliver characterful flavour to a brew. The choice of grain and particularly the quality of malted barley are essential components in the organoleptic profile of a beer and the sourcing of these ingredients plays a vital role in the brewery's vision.

This is the second of two articles on Marston's ingredient-focused approach to modern brewing.