The Beauty of Barley in Beer! 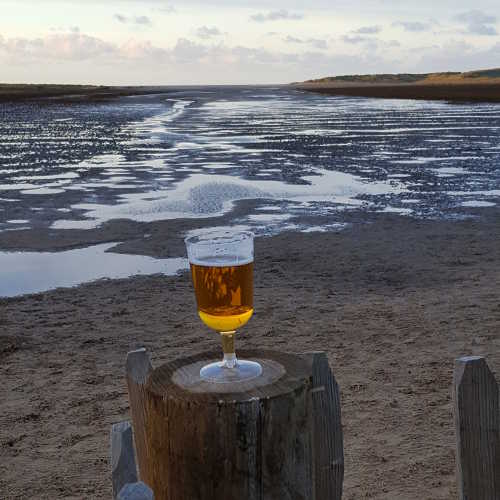 Is there anything that hasn't already been written about Marston's? This iconic company has had an important place in the history of British brewing and pubs for over 180 years, although a pivotal moment came in 1890 when three Midland breweries combined to form Wolverhampton and Dudley Breweries. Around a hundred years later, the business began expanding, buying breweries and pubs including, in 1999, Burton on Trent-based brewery, Marston, Thomson & Evershed, which owned 918 pubs. As a result, they also acquired the famous Marston's brewery, creator of the revolutionary Burton Union system in the 1830s that uses a series of large wood barrel casks, pipes and troughs to recirculate the beer during fermentation and harvest the yeast.

Burton itself is synonymous with the history of brewing due to the unique properties of the town's water that trickles through a thick layer of gypsum in the ancient rocks on which the town is built. The high sulphate content of the resultant well water imparts both a characteristic slightly earthy/eggy aroma known as the 'Burton snatch' plus a unique flavour and has been emulated by brewers worldwide in a process of adding salts to water known as Burtonisation. Continuing to expand in the noughties, the company became the third largest brewer in Britain with over 2,250 pubs nationwide and eventually changed its name to Marston's in 2005. Following further acquisitions, they moved their head office back to Wolverhampton last year and continue to have a major impact on the country's beer culture. Currently, they are the UK's leading brewer of premium cask and bottled beers with five breweries around England and the only one to continue using the Burton Union system, specifically for Marston's Pedigree. 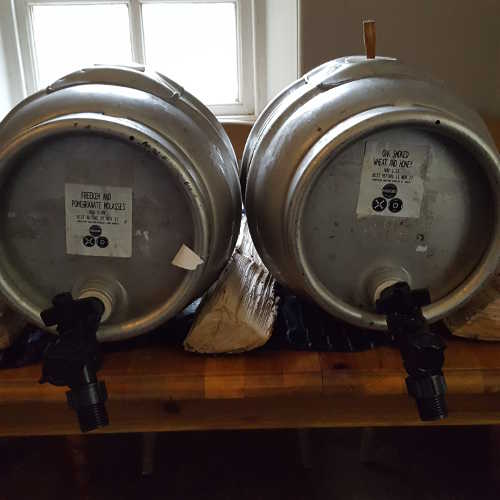 The company has also been looking to the future, embracing the modern craft beer trend, by installing a new nano brewery, DE14, named after their Burton postcode and located within their main brewery. Here brewers experiment with many different ingredients to produce small batch beers (600 pints of new beer in three barrels per week), destined for events, festivals and a few pubs.

Whether traditional or contemporary brews, a high quality source of malting barley is essential and this is where the North Norfolk coast plays an essential role, in particular one of England's best loved estates. 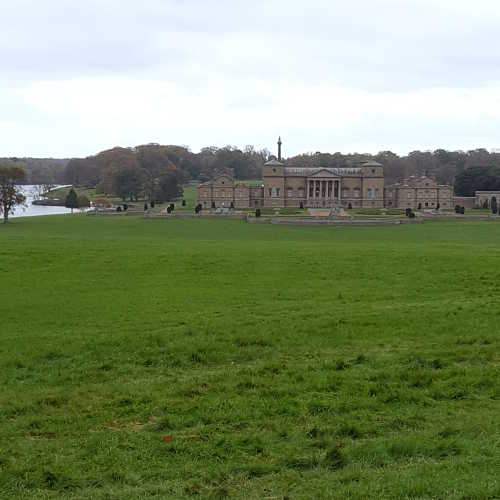 The grounds of Holkham Estate

The Holkham Estate is home to 3,495 hectares of farmland and is where Thomas Coke invented his innovative crop rotation system in the 1770s. Building on ideas borrowed from Dutch and Flemish farmers and previously promoted by 'Turnip' Townsend in the early 18th Century, Coke of Norfolk further promulgated innovations and education in agricultural techniques, in particular the need to rotate crops to maintain nutrients in the soil and improve land yield. By growing crops, such as clover or turnip, in the same field as wheat, barley or oats after those have been harvested, nutrients in the soil could be replaced naturally. If animals are then allowed to graze in these fields, eating the crops, their droppings would help to fertilise the soil. Eventually, this 'British agricultural revolution' spread around Europe and the rest of the world, before more unsustainable large-scale farming practices focusing on 'cash crops' gradually took over through the 20th Century. However, Coke's legacy is not lost and continues today at Holkham with a six-course rotation system comprising oil seed rape, winter wheat, sugar beet, spring barley, salad potatoes and then the Flagon winter barley used in Marston's beers. 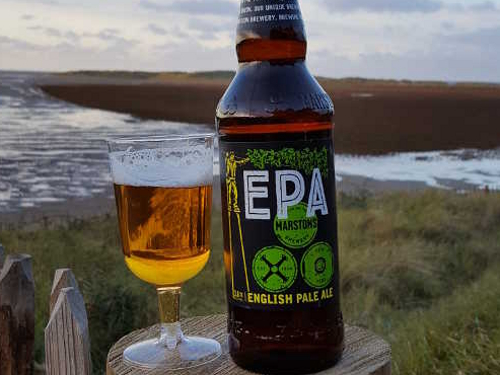 So what better way to celebrate the connection between Norfolk, the home of agriculture and Burton, the spiritual home of brewing, than a trip to the estate to learn about Holkham's sustainable agriculture, wildlife and nature conservation and to taste the fruits (or should that be grains?) of their special relationship with Marston's.

"Malt is the body, while hops are the lips!"

The Holkham Farming Company manages nearly 4000 hectares of estate land in this beautiful part of East Anglia. James Beamish, Farm Manager, spoke about the unique terroir that makes barley such an important crop here. "Malting barley is concentrated into North Norfolk mainly. The soil type - light sand over chalk - and the cool, maritime climate around the coast are perfect for growing the best barley in the world." At Holkham, they have been growing Flagon, which is related to Maris Otter, for the last seven or eight years. Poul Hovesen, Director of Farming, explained further the relevance of the estate's geographical position for the production of this crop: "Our location is unique in England for winter malting barley, as we don't get frosts which would kill the crop elsewhere. We also don't suffer many hot, dry periods during harvest time being so close to the sea, thanks to the haar and the pass rate of our crop is high at 95%." (Editor's note: the haar is a cold sea fog typical of the east coast of England that drifts over the fields in early summer, extending the natural ripening process. Together with the lighter soils that have a lower nitrogen content, allowing enough starch to produce fermentable sugars and reducing the level of protein that would otherwise affect the clarity of the resulting beer, this produces a better quality crop.) 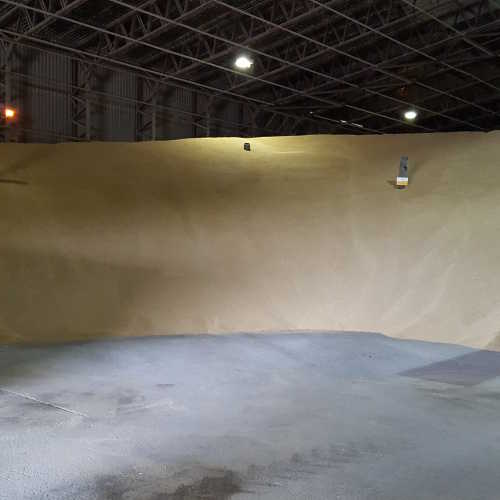 Spring malting barley is a crop much in demand, especially for lager production and is grown throughout the UK, including at Holkham. In contrast, winter malting barley is a relatively niche crop with smaller market opportunities and hence riskier, less competitive yields. Bob King, Group Commercial Director of Crisp Malting Group which malts the barley from the Holkham Estate before it is used to brew Marston's beer, described the importance of malt quality in today's market. "With the craft explosion, there is a long-term need for consistent production of high-quality malt every year. It's so important to brewing. Malt is the body, while hops are the lips!"

Hovesen also spoke about their model of sustainability and why livestock is important in this regard. "We have a holistic, rather than productive herd! Cover crops grow well on our arable land and allow the sheep to graze in the winter. We're going back to the old methods of Coke of Norfolk, using livestock manure to improve soil conditions, rather than applying commercial products. We have lambs from Derbyshire that graze in winter and their manure retains nutrients in the soil. The world has been led down the wrong path with poor farming practices that ignore science and, in terms of volume by output, UK agriculture has stagnated over the last 15 years seeing increased resistance to insecticides, pesticides etc.. Here, we can farm without neonicotinoids, using more traditional and sustainable methods to maintain the biological activity in the soil. As a result, we have better products of consistent quality and improved yields and have seen a 20% increase in our winter barley crop on soil that used to be regarded as too poor! Additionally, Coke of Norfolk believed in working with tenant farmers for their benefit, not just for price, so we work with 15 tenants in a similar way. We can deliver what brewers want and our partnership with Marston's, for example, offers them full traceability of the product. Moreover, with uncertainty over future farming subsidies and the impact on long term crop supplies following Brexit, we are better able to survive." 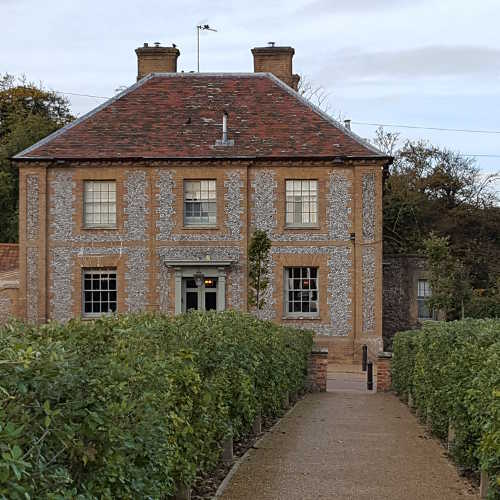 Side view of the Victoria Inn

"We can farm without neonicotinoids, using sustainable methods to maintain the biological activity in the soil."

The Holkham Estate is fully committed to renewable energy. As well as maintaining a 100-acre solar field which can power 6,000 homes, they use wood chips from its grounds to fuel two biomass boilers that heat both Holkham Hall and The Victoria Inn. Additionally, their anaerobic digester acts like a giant cow's stomach, using natural bacteria to break down the silage from rye and maize crops to produce 25,000 tonnes of manure which can then be utilised on the land as an organic fertiliser. Additionally, biogas (methane and carbon dioxide) is produced which is fed into the national grid and provides enough gas to heat 2,500 homes during winter and up to 40,000 homes during summer.

Holkham National Nature Reserve is one of only four in the country located on a private estate. Covering over 3,700 hectares, there are a variety of habitats, such as salt marsh, sand dunes, pine woodland, beach and grazing marsh that support a rich wildlife, including pink-footed geese, hawkmoths and natterjack toads. The stunning, multi-award winning beach draws in thousands of tourists every year and provided the perfect backdrop for the lucky posse of beer-loving journalists to celebrate the beauty of barley in beer, while spending some moments breathing in the bracing North Sea air with a glass of Marston's Old Empire IPA in hand 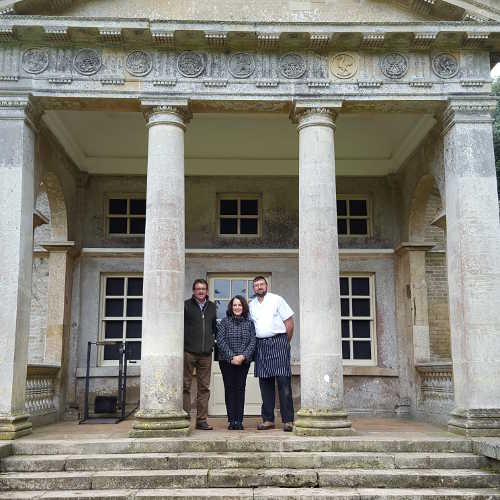 Michael Chamberlain, Chef at The Victoria Inn in Holkham, devised some mouth-watering dishes using Norfolk produce to pair with a selection of Marston's brews, accompanied by his beer and honey beer bread. 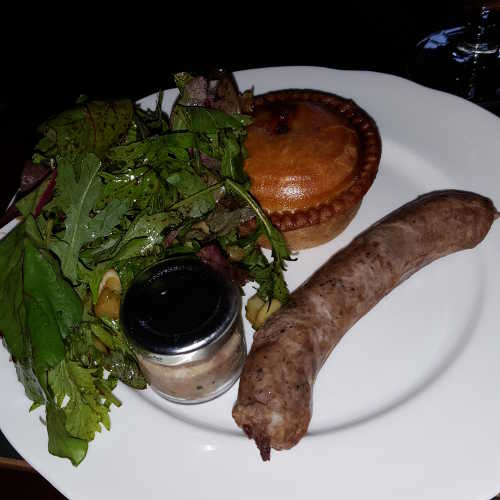 Lunch in the Temple at Holkham 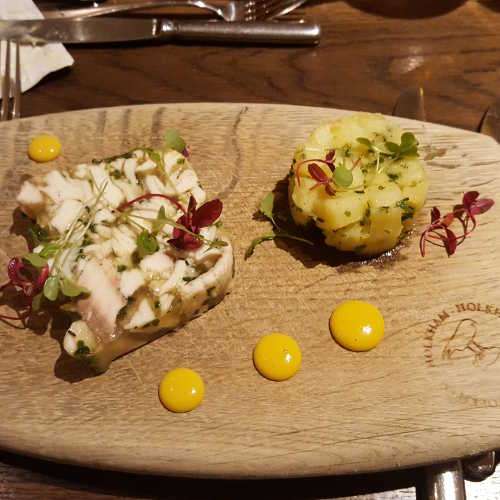 At dinner, 61 Deep Pale Ale (3.8% ABV) and EPA (3.6% ABV) were paired with the starter of pike terrine, potato salad and mustard dressing. The former is named after the depth in metres of the well at Marston's Burton brewery. Packed with five American and Australian hops which impart grapefruit and tropical fruit notes, this was a good match for the zesty tang of the mustard dressing, while the more subtle citrus flavours and bitter touch of the EPA worked well with the earthy taste of potato. 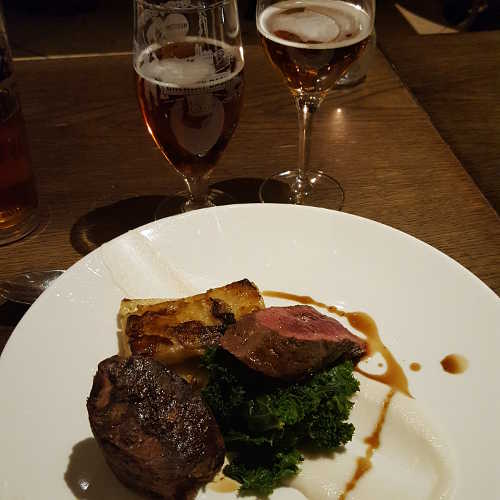 A main course of venison prepared in two ways with turnip dauphinoise, kale and redcurrant jus was paired with the biscuity, malty, lightly fruity and spicy Pedigree (4.5% ABV) and the contrasting bittersweet and citrusy Old Empire IPA (5.7%). Both these beers seemed to work better with separate elements of the dish, a further reminder of how different beer styles have the versatility to pair successfully with many types of food. 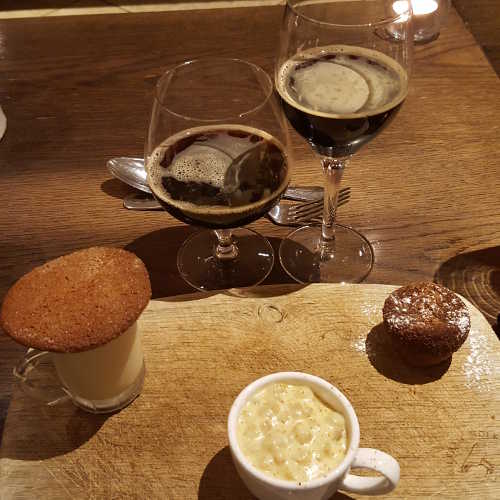 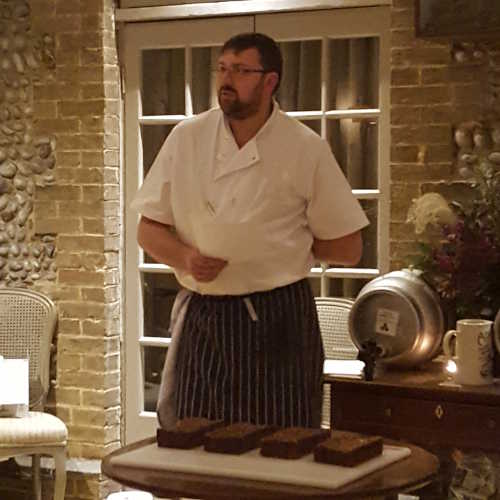 Again both beers worked well, the cherry and chocolate notes of the Cherry Head adding a smooth and slightly sour fruity complement to the rich, sweet flavours of the dish, while the coffee edge of the Pearl Jet lent a refreshingly drier touch that cleansed the palate.

Although a fulcrum for tourism, Holkham offers so much more with its dedication to sustainable agriculture, renewable energy initiatives, conservation and countryside management. Its partnership with Marston's and other breweries, providing them with some of the best winter and spring malting barley this country produces, is a testament to the success of their farming methods and augurs for a healthy beer future.

This is the first of two articles on Marston's ingredient-focused approach to modern brewing. The next article will feature further DE14 beer and food pairings.