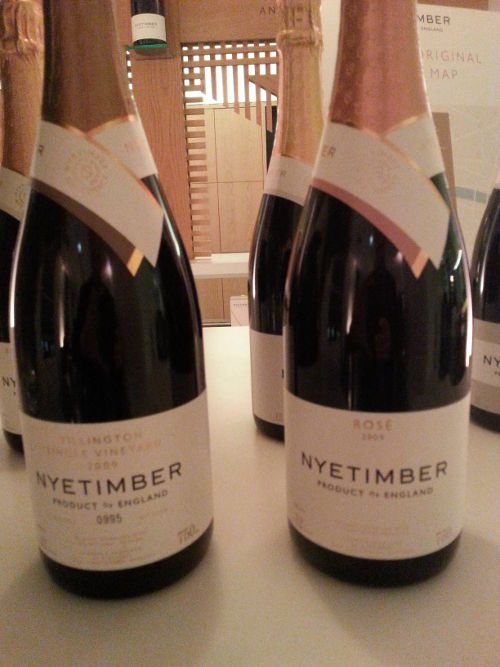 What is the writing equivalent of shouting, because I have something to shout about? Should I use upper case, or end each clause with exclamation and question marks?!? Alternatively, do I hit my head repeatedly against my PC and hope somebody listens? Perhaps the solution is just a simple, calm phrase - 'give it a go'.

So what am I talking about? Well, about two years ago, I posted an article on my blog, putting forward some ideas on a subject that interests me greatly. I’m always fascinated by cultural stereotypes, particularly as regards to food and drink. These are so often negative and rooted in outdated ideas from the 1970s – a decade of kitsch, if ever there was one - although there was some really good music around at the time (plus some really bad stuff too!). There we go – had to stick an exclamation mark in there. In that piece, I focused mostly on ideas of British cuisine, a term which many still regard as oxymoronic. Yet how can this be, at a time when there is so much interest within the UK on quality food and drink via a plethora of TV programmes, farmers' markets, speciality delis and farm shops etc.? How can British chefs, specialising in home-grown recipes and ingredients, win so many awards, including Michelin stars? On the back of the worldwide craft beer revolution, the UK is steering its craft beer juggernaut onwards and upwards plus there is genuine renewed interest nationwide in traditional real ale and cider.

What do all these strands of food and drink have in common? Flavour, flavour and FLAVOUR. There – I now have my uppercase comment. In my article, I postulated that since us Brits tend to be quite a self-effacing lot, we are reluctant to shout about our successes, or even be aware of them at times. So, if we don't scream how good our food and drink can be, how on earth can we expect anybody else to realise this? Of course, there is plenty of cheap and nasty stuff out there, but is that really any different from anywhere else?

I have often encountered people, desperate to hold on to beliefs which go against the grain of all evidence, as if their whole world would collapse around them, if they opened their eyes a little wider. For example, there are still many who only associate German wine with the cheap imports of the 1970s and 1980s, despite the fact that the country undoubtedly produces some of the finest white wine in the world plus some delicious reds.

One area which also fits neatly into this opinion-dividing and prejudiced mentality is English wine. However, negative attitudes are gradually being challenged with great success, as English wine continues to gain awards and recognition worldwide. So this is what I want to shout about. Put away your preconceptions, murder your misconceptions, challenge your chakras… Sorry I’m getting carried away here. What I really mean is just 'give it a go'.

I recently wrote about English Wine on these pages, so this is somewhat of a follow-up, just so that I can shout a little bit louder. Champagne is one of the world’s greatest drinks and the best examples over time have been benchmarks for top notch sparkling wine. However, there are high quality alternatives that offer a gamut of aroma and flavour profiles to put a smile on the most cynical doubters' faces. So how about having a three-course meal with English sparkling wine specifically chosen for each course, courtesy of Nyetimber, one of England's leading producers? 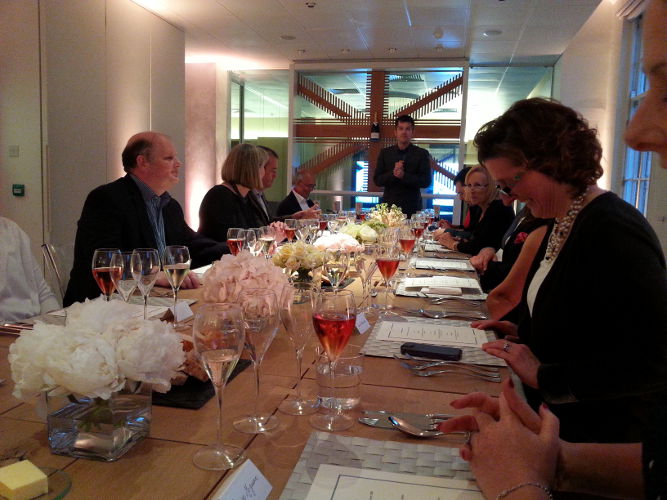 Coinciding with English Wine Week and riding high on a trophy-capped wave of achievement, husband and wife winemakers Brad Greatrix and Cherie Spriggs introduced invited guests to a special dinner, celebrating the company's success story. Having swapped Canada for Sussex, they have seen their hard work reap dividends, as the winery continues to develop its burgeoning global reputation. After a brief introduction to Nyetimber at the start of the meal, when Cherie explained how they only use their own grapes, grown on six different vineyards, we began our 3-course meal, with an explanation of each wine at the appropriate stage. 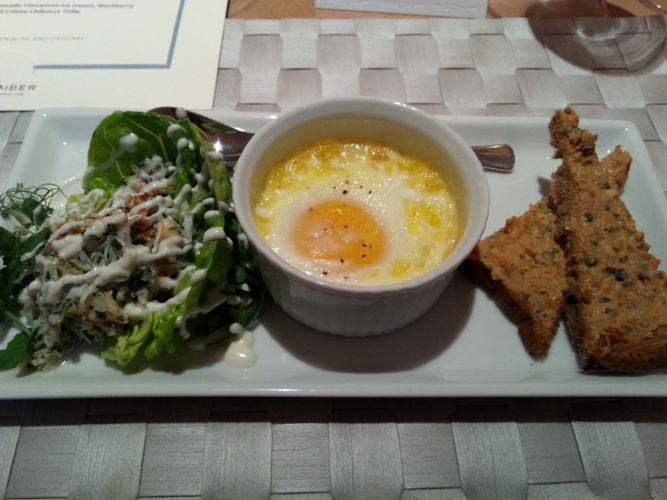 Our vinous celebration had already begun in style on arrival with a glass or two of the Classic Cuvée 2009 and Cherie reiterated how this particular vintage was one of the best for English wine in the last 10 years, with a perfect climate that resulted in wines of great quality. Made from Chardonnay, Pinot Noir and Pinot Meunier, this was described as having classic aged Champagne-like flavours and, according to Cherie, represents "something greater from all the grapes than from just one". A classy and invigorating way to start this special occasion.

Our first course of 'Warm Baked Egg Cocotte, Brown Crab Toasts and White Crabmeat Salad' was accompanied by the Rosé 2009. Also a blend, the Pinot Noir-dominant red berry flavours worked superbly with the sweetness of the crab meat. 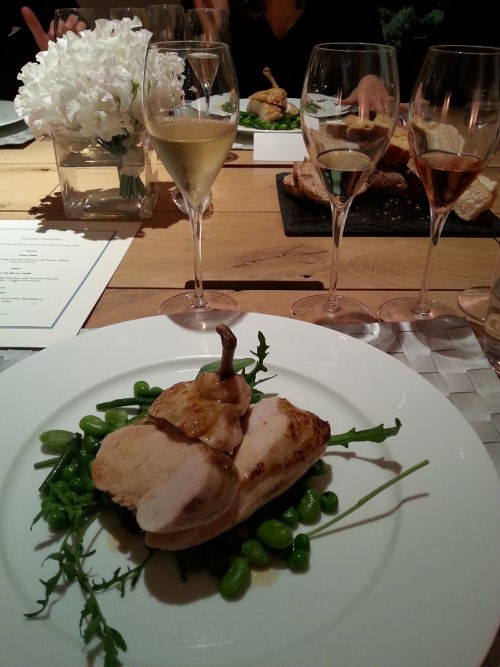 We then had the pleasure of drinking the wonderfully elegant, rich and complex Blanc de Blancs 1998 with our main course of 'Roast Breast of Free Range Chicken with Summer Beans, Peas and Asparagus, Truffle Oil and Jus'. The depth and development of toasted notes, fruit, nuts and gentle spice make this wine a particularly good accompaniment to stronger-flavoured food. 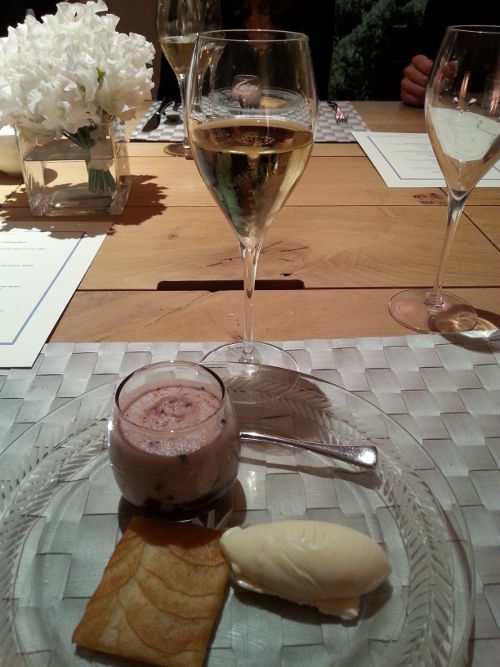 Our final course of 'Apple Tart, Homemade Cinnamon Ice-cream, Blackberry and Crème Chiboust Trifle' was matched with Nyetimber's fruity, crisp, slightly honeyed and mineral Demi-Sec NV, also made from 100% Chardonnay. Cherie explained how this wine is approximately four-times as sweet as the other Brut-style wines. This allows the combination of flavours in the dessert and wine to work in harmony without any sense of harsh acidity and the finish is beautifully clean and refreshing.

So there we are – good food, made in a modern British style with local ingredients, drawing on French influences, but with a British identity, all served with top quality English sparkling wine. Negative stereotypes are notoriously difficult to eradicate, but through unadulterated evidence to the contrary and via positive experiences, they can be eroded and ultimately reversed for all but the most stubborn deniers. After all, people used to think that England was too cold and wet for grapes. There may still be a battle for acceptance, but surely this is worth fighting for and shouting about?

OW! – JUST HIT MY HEAD AGAINST THE PC!