French vs Italian Wine with Food 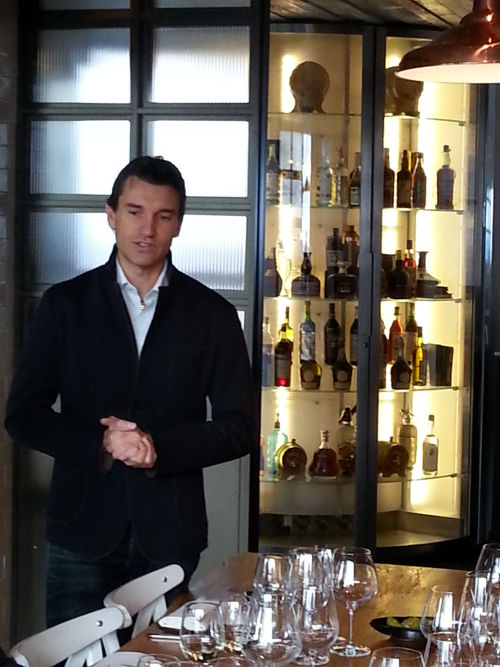 Tiramisu or tarte tatin, Sophia Loren or Gérard Depardieu, Michelangelo or Rodin, Gianni Rivera or Michel Platini, Armani or Dior…? France and Italy are responsible for some of the most iconic names in food, art, sport and fashion. But wait, there's a clash ahead and the two rivals need a winner! It's David vs Goliath. So hop on your Vespa, or sidle into your 2CV and join in the contest with no let-up, right up until the post-lunch cappuccino or café au lait!

On the 11th Feb 2014, a themed sommelier lunch, comparing French and Italian wines, took place at London's Duck & Waffle restaurant, courtesy of renowned Italian wine producer Casa Vinicola Zonin. A family wine business that began in 1821, the company began to acquire other wine estates in 1970 and now own ten estates in seven regions of Italy, including three in Tuscany, and also Barboursville Vineyards in Virginia. 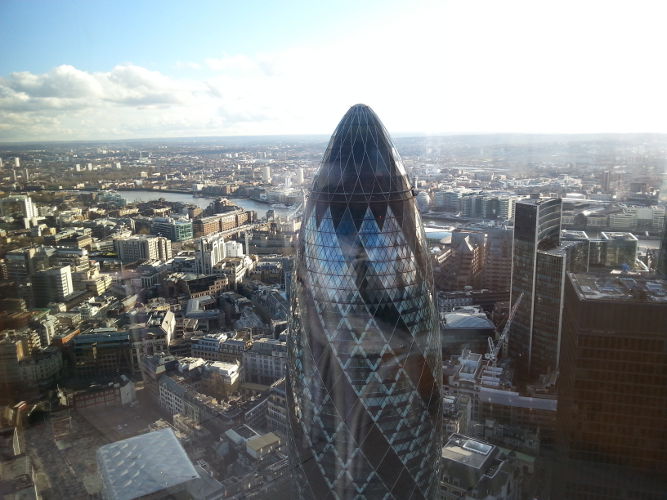 There were no swords, guns or bayonets, but we were armed… with wine glasses, knives, forks and spoons! When large parts of the country were battling against the incessant flooding, it seemed somewhat fortuitous that the participants, from France, Italy, Greece and the UK, were comfortably ensconced in the highest restaurant in the UK, looking down on the rain-soaked glittering expanse of the London metropolis shimmering below us. As we took our seats in the private dining room, on the 40th floor of London's Heron Tower, we looked forward to our own battle ahead with the "surprise" wines alongside award-winning Executive Chef Daniel Doherty’s British and European-inspired dishes. 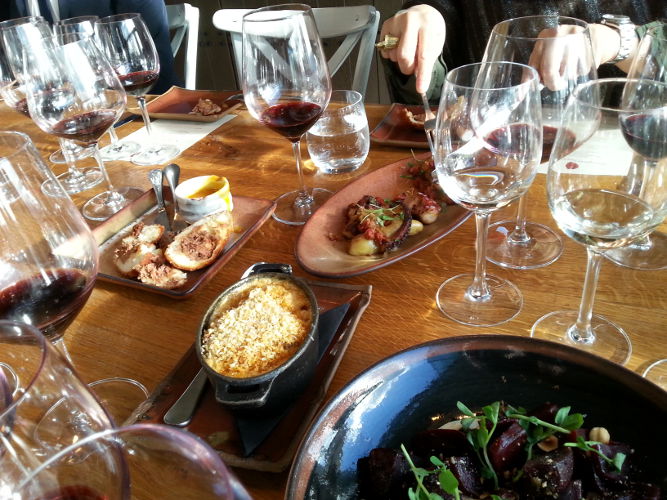 A selection of delicious sharing plates

Midway through lunch, the sun unexpectedly burst out, lighting up the culinary delights in front of us. Although captivated by the 18-course sharing menu, our principal theme for the day was French versus Italian wine, "David versus Goliath", so named to represent the fact that France (Goliath) has perhaps a longer history of consistency in quality wine than Italy (David). Lorenzo Zonin, our host, emphasised how Italian wine, probably better known for its uniqueness, is nevertheless improving in quality levels every year, creating greater diversity of flavours, while also increasing its use of native grape varieties. 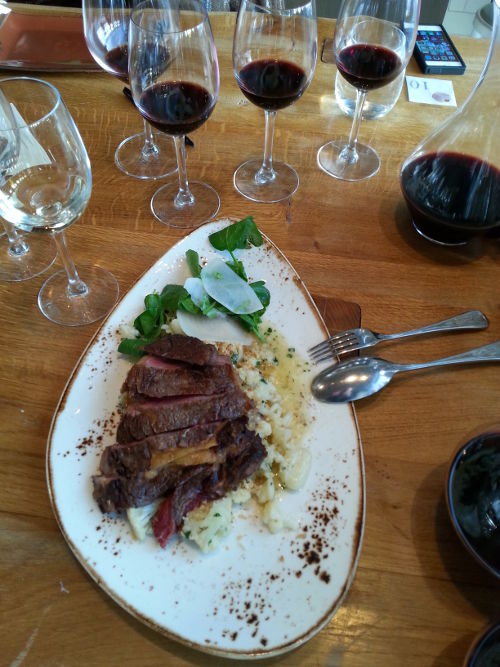 The challenge was to identify which wines were from which country and perhaps to see whether our personal preferences matched our perceptions of the quality each nation can produce. Three whites, all from the same grape, but from different areas and five reds, mostly from blends, but also one single varietal, were served to us, followed by two sweet wines with dessert. Five of the ten wines we sampled originated from Zonin estates.

So never mind "To be or not to be", what about "Chianti or Claret, that is the question"? Let the challenge begin! 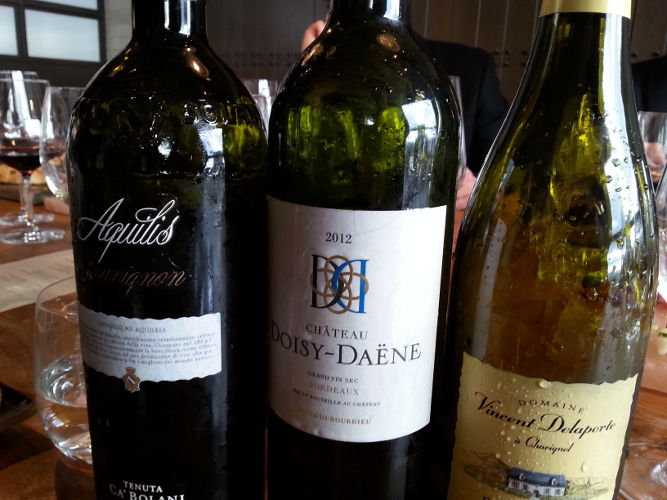 White wines (in order of tasting)

We began with three contrasting Sauvignon Blancs from 2012. Each of us had our own personal preferences, but the room was split, with the second and third narrowly edging it. The fresh, fruity and mineral Sancerre, the region identified correctly by some of the guests, was a particularly good match for the yellowfin tuna and scallop starters, whereas the Doisy-Daëne's citrus, pear and spice character with a touch of creaminess paired well with the coal charred aubergine and the caramelised onion bread. So Round 1 to France!

As guests began to discuss the important matters of the day, such as who is currently the best footballer in the world – Messi or Ronaldo or … ? (I wonder if an English player will ever be mentioned in my lifetime!) – the next set of plates was served and we set our minds to the red wines. 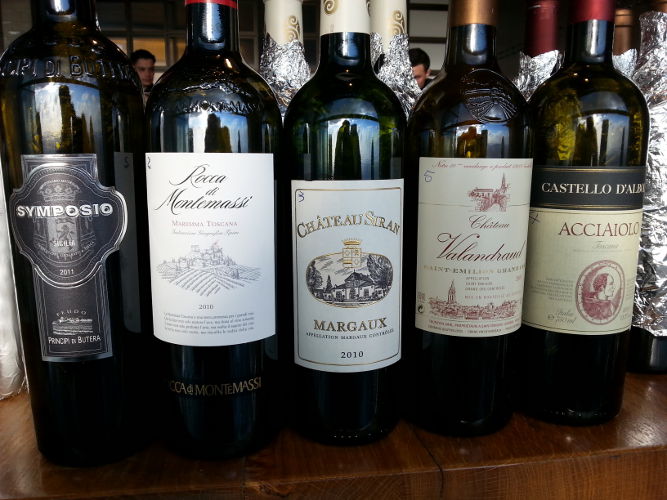 Red wines (in order of tasting)

The five reds were not easy to identify, but the second and fifth were recognised by most participants as Italian and were among the room's three favourites. The other wine that was very popular was the fourth one, a top quality, 100% Merlot Bordeaux.

The Maremma blend of classic Bordeaux varietals had a velvety cherry and blackcurrant fruity freshness with cedar wood, mint, eucalyptus and spice. The 100% Merlot Saint-Emilion showed off its sweet spice, cherry and plum characteristics with soft, subtle smoky and woody notes. Castello d'Albola's blend of 65% Sangioveto and 35% Cabernet Sauvignon (a great collaboration between Italian and French origin grapes!) exhibited intense floral aromas plus a nutty edge, followed by cherries, plums, sweeter spice and herbal notes of cloves and violets on the palate with good acidity and well-integrated tannins. Although different in style, these three wines were particularly classy and beautifully satisfying matches for both the chef's signature dish of spicy ox cheek doughnut with apricot jam and also the Angus rib eye with gnocchi, bone marrow and cauliflower gratin, pickled turnip and watercress. So a narrow victory for Italy in this European clash of the Titans. Score: 1-1. 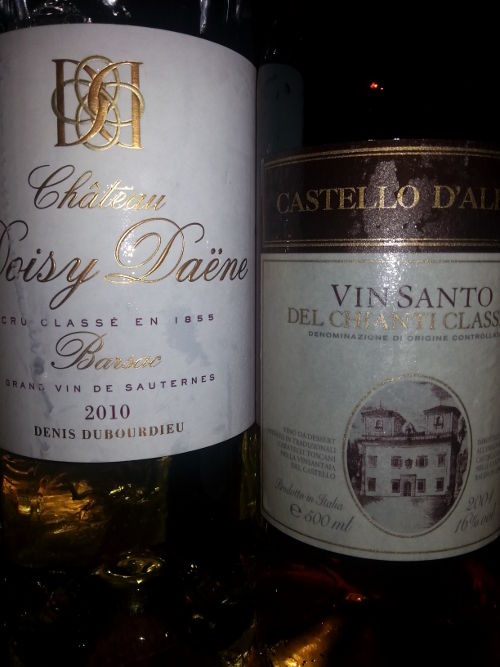 Establishing further parity, the two sweet wines, although very different, were equally delicious, showcasing their respective styles with elegance and complexity. The score remains 1-1 and the contest ends in an honourable draw with no casualties on either side! 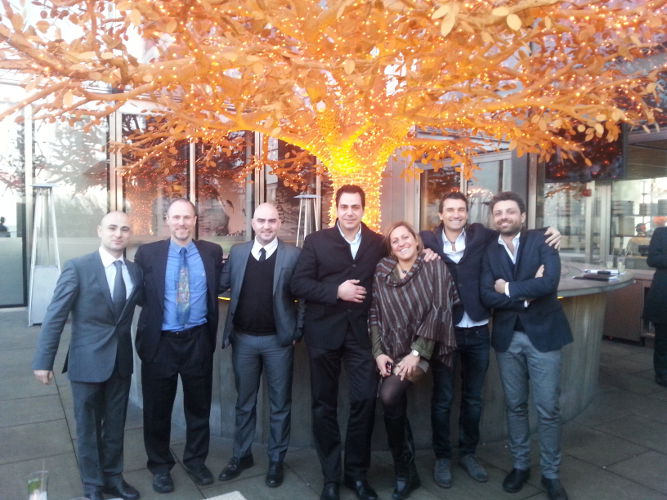 Participants on the outside terrace below the restaurant

Many thanks to Lorenzo and his team for this fascinating day. We all enjoyed the choice of wines and it was telling that both Italian and French seemed more or less evenly represented among the participants as favourites of the day. So even though France has a proud history of consistently making high quality wine, Italy can equally celebrate and build on its status as a top wine-producing nation.

Is Italy fairly represented by the notion of the underdog David opposite the French wine Goliath? Maybe the answer lies in the first of the white wines - one created with the help of celebrated French oenologist, Professor Denis Dubourdieu. Tenuta Ca’ Bolani Aquilis 2012 was awarded "Best Sauvignon in Italy" by the 2014 Annuario di Luca Maroni, a respected annual Italian wine guide. Made with Sauvignon Blanc of two different clones, one from Italy and one from France, this is a clear indication of how wine provenance, knowledge and techniques can transcend national boundaries, combining in perfect harmony to create a world-class product. Two Goliaths (one arguably a little more experienced at the higher end of the market) helping each other with neither a bow and arrow nor slingshot in sight!

The battle is over in this London heavyweight clash, but in the UK generally, consumers tend to be prepared to pay higher prices for French rather than Italian wine for historic reasons, built on years of reputation, knowledge, habit and trust. Many people simply do not know how good Italian wine can be and how well it compares to popular French styles and so the fight goes on…

See my review from last year on some of Zonin's best Tuscan wines.

Further details on Zonin wines available in the UK can be found on their UK website.