All images provided by Steven Morris Photography, unless otherwise stated

There's good niche and there's bad niche. There's price niche, quality niche, 'keep it quiet' niche and any other niche you could think of, but with wine, is it the country or region where it's from or the outlets where it's sold that make it niche? One lesser known wine region whose offerings are unlikely to be found in multiple retailers, but which is becoming increasingly recognised for its shining quality is Virginia, the fifth largest grape producing state in the USA. Virginia is known for its production of niche (that's good niche!), high quality wines in relatively limited quantities. To put this into context, last year 624,000 cases of Virginian wine were sold, which would equate to the output of three medium-size Californian wineries! Additionally, whereas 90% of wines sold in the U.S. cost less than $10 a bottle, none of the Virginian wines falls into this category with $15, $20 or $30 being normal. Only last year, the International Wine Review commented on the impressive progress the region has made in producing quality wine and its rising number of boutique wineries. The State currently has 275 wineries within seven viticultural areas, a temperate climate spread across five distinct climate regions and a variety of well-drained soils from granite in the west to sandy loam in the east, all contributing to excellent grape growing conditions. A wide range of red and white varieties are grown, including Chardonnay, Viognier, Cabernet Franc, Merlot and many other 'noble grapes'. Standout vintages include 2009, which was warm rather than hot, producing very elegant wines and 2010, which in contrast was dry and hot, allowing grapes to ripen early, producing luscious, opulent wines.

The history of attempts at winemaking in the area dates back to the time of Thomas Jefferson, whose efforts to grow European grapes ultimately failed. After switching successfully to native American vines, Virginia's wine industry subsequently stalled during the Prohibition era before being resurrected in the second half of the twentieth century, influenced again by European viticulture. Indeed, in the 1970s, Gianni Zonin, head of the Zonin family which owns vineyards throughout Italy, saw untapped potential in this American state which shares a similar latitude to Sicily. So, in 1976, he established the renowned Barboursville Vineyards, located on the estate of Jefferson's good friend James Barbour, Governor of Virginia in the early 19th century. The first in the state to plant and successfully establish vitis vinifera vines, Barboursville currently has 126 acres of vines and consistently gains international recognition.

Other wineries have since established themselves on the global stage too. Veritas Vineyards and Winery is a family business that began in 1999 with five acres and has grown to encompass over 50 acres of vineyards. Owners Andrew and Patricia Hodson left behind their medical careers to pursue a vision of making great wine in Virginia. With an ethos of producing elegant and complex wine that truly expresses the terroir, the winery name is derived from the Roman historian Pliny the Elder’s observation 'In Vino Veritas' (In Wine there is Truth).

Boxwood Estate Winery grew from a well-known horse farm and home of General Billy Mitchell, a pioneer of military aviation. Opened in 2005, it is owned by John Kent Cooke (son of ex-Washington Redskins' owner Jack Kent Cooke) and his wife Rita and is managed by their daughter Rachel Martin. The estate covers 160 acres, of which 28 acres are currently planted with vines, 22 of which are in production.

In conjunction with R&R Teamwork, winemakers from these three vineyards recently attended a dinner and tasting in London, along with Terry McAuliffe, Governor of Virginia, Todd Haymore, Secretary of Agriculture and Forestry, Annette Boyd, Director of the Virginia Wine Marketing Office and Chris Parker, MD of New Horizon Wines, exclusive UK importers of award-winning Virginian wines.

Some of the wines enjoyed before dinner

To start with, we enjoyed a selection of sparkling, white and red wines. Particularly impressive was the Veritas Viognier 2015 (RRP £19, distributed in the UK by New Horizon Wines), a delightfully fresh and floral example of this grape with vibrant aromas of stone fruit, honeydew melon and orange blossom, while the long palate has a likewise fruity profile with an added hint of tangerine.

Dinner then beckoned with wines carefully selected to complement the dishes, as follows:- 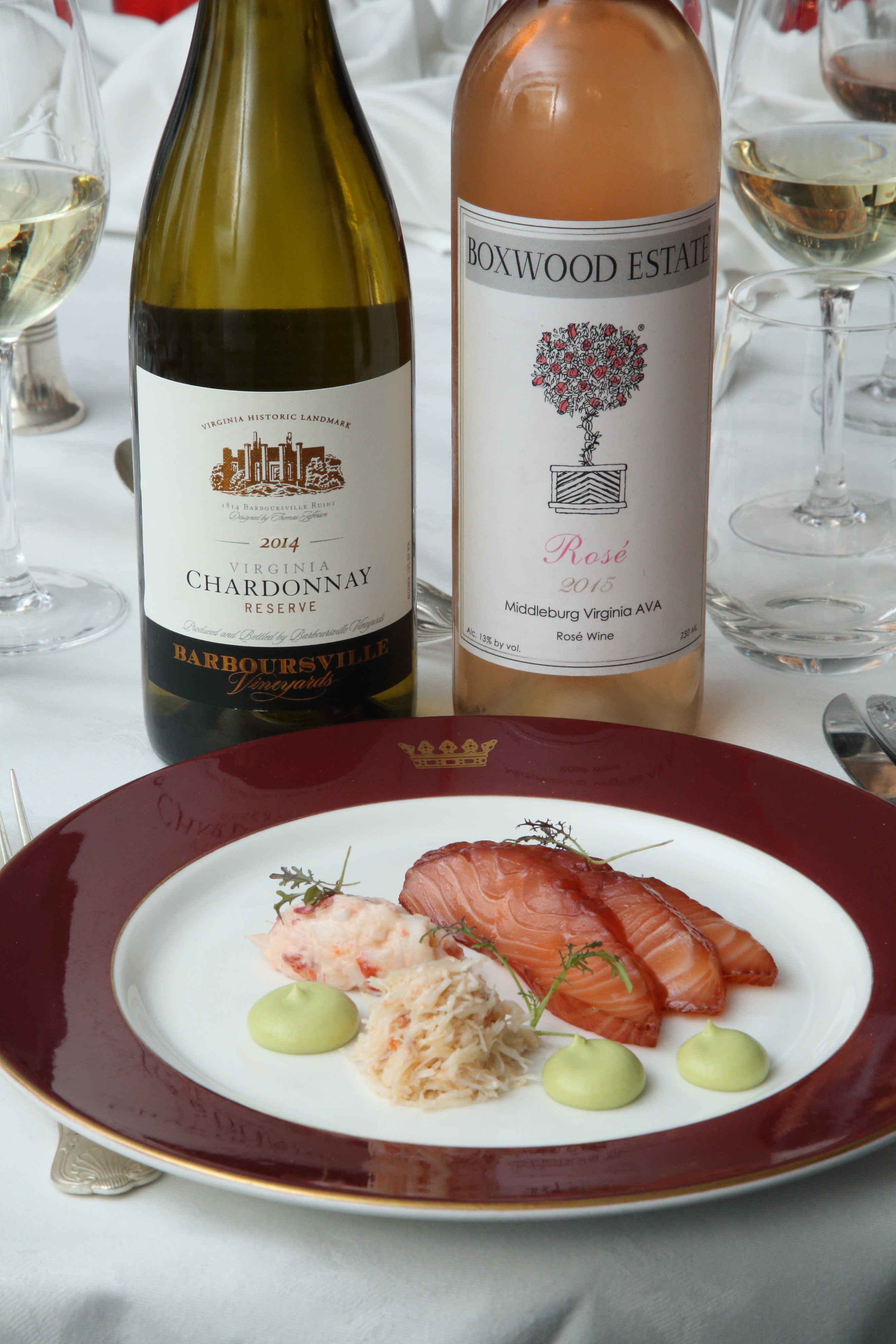 Barboursville Chardonnay 2014 (RRP £21.14, distributed in the UK by Zonin UK).
Grapes were whole cluster pressed prior to fermentation in 2-3 year-old French and US oak. This was followed by 8 months' ageing with weekly lees stirring. No malolactic fermentation was allowed in order to retain firm acidity with the fresh, aromatic profile of the Chardonnay grape. Floral, crisp and fruity with notes of lemon, peach and melon, a softening touch of vanilla and honey plus a smoky hint, this is a great food wine. Winemaker Luca Paschina explained that Barboursville has always been committed to and promoted high quality food and wine matching, a central feature of their on-site restaurant.
Boxwood Rosé 2015 (not currently available for sale in the UK, but available via New Horizon Wines).
Half whole cluster press and half saignée method, this rosé from 42% Cabernet Franc, 32% Merlot, 13% Cabernet Sauvignon, 10% Malbec (not included in the saignée extraction) and 3% Petit Verdot, is made in a way that retains a lovely fresh fruit character. With notes of soft ripe fruit, particularly raspberries, pears and a hint of melon, there is also a little tingling spice that comes through on the mid-palate: a beautiful wine to pair with the touch of sweetness in this fish-based starter.

Lamb rump with Dauphinoise potatoes and green beans in a roast garlic sauce.

Barboursville Octagon 2012 (RRP £45.09, distributed in the UK by Zonin UK)
This is the winery's flagship Bordeaux blend, made for this vintage from 50% Merlot, 49% Petit Verdot and 1% Cabernet Franc. The wine is matured in 40% new and 60% two-year old French Allier oak barrels for 12 months. The result is a complex mélange of plums, cherries, berries, chocolate and touches of coffee, leafy/earthy hints and a dry finish.
Boxwood Topiary 2010 (RRP £28, distributed in the UK by New Horizon Wines)
With a mission to create both 'Left Bank' and 'Right Bank' styles, this belongs to the latter category. Made from 69% Cabernet Franc and 31% Merlot and aged for 12 months in French oak, the dominant characteristic is plums, backed up by black pepper, cloves, berries, herbs and well-integrated oak. The wine has retained good freshness, the tannins have softened with time and the finish is long.
Veritas Petit Verdot 2010 (RRP £23, distributed in the UK by New Horizon Wines)
This is a gorgeous example of a single varietal Petit Verdot, which is becoming increasingly important in Virginia, despite its reputation as a difficult grape to grow. It ripens early in this part of the USA and Veritas' expression is beautifully floral, vibrant and fruit-forward with notes of juicy black fruit, nutmeg, touches of leather and cedarwood plus silky tannins. The wine has had 16 months' ageing in 80% French and 20% American oak (53% new barrels).

Veritas Petit Manseng 2013 (not currently available for sale in the UK, but available via New Horizon Wines)
Petit Manseng is another grape garnering much interest in Virginia. Its high sugar and acidity level lends itself perfectly to making sweet wines, although dry versions are also being vinified. The wine that we enjoyed with the perfectly matched apple and custard-based dessert has a nose reminiscent of tarte tatin with added hints of nuts and tropical fruit. This continues on the palate with apple, pineapple, mango and toffee notes balancing the firm acidity.

This event yet again confirmed Virginia's status as a producer of world-class wines. John Kent Cooke said “I am convinced that with today’s viticultural knowledge and winemaking techniques Virginia can produce a premium wine as good as anywhere.” The challenge now is to spread the word at home and abroad, ensuring that supply can match demand, building on Thomas Jefferson's original vision all those years ago.