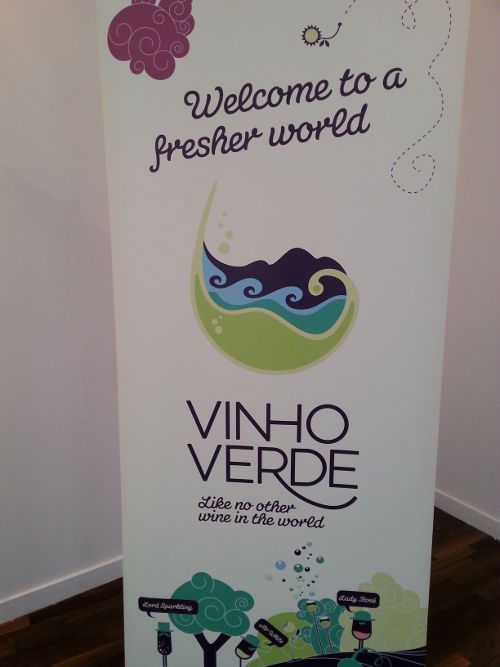 The weather is getting warmer, t-shirts have been dug out from under the winter layers and the summer will soon be upon us. So it's time to start thinking about some fresh, light and crisp wines to suit the sunshine mood and what better than Vinho Verde, the iconic wine of Northern Portugal.

Now I fully understand that some wine drinkers might be choking on their glass of Château GreatExpectations 2013, while reading this introduction. But don't turn away, because I'm going to try my hardest to convince you to throw away any preconceived notions and think again. There are many misconceptions in the world of wine and for too long one of them has been to regard Vinho Verde merely as cheap, slightly fizzy, low quality and something for the locals or tourists only. This is about as far from the truth today as saying that London and Manhattan are really cheap places to live in, or that there aren't enough reality TV shows!

I love Vinho Verde – in fact, I love Portuguese wine and food in general. I want to challenge misconceptions and I hope that this article will go some way towards that. First what is Vinho Verde, where does it come from and what makes it special?

What is Vinho Verde?

Vinho Verde literally means "green wine", but rather than referring to the colour, it describes the character of the wine, i.e. young, crisp and fresh, typically with a light sparkle and relatively low alcohol. Indigenous grape varieties, some of which are grown nowhere else, are integral to the unique qualities of these wines, whether white (86% of sales in 2013), red (10%) or rosé (4%). Fully sparkling Vinho Verde is also produced, mainly from the Alvarinho grape, using the 'classic method' of secondary fermentation in bottle, but the Charmat method will be allowed too in 2015.

The alcohol level of 'generic' Vinho Verde must lie between 8% and 11.5% ABV. However, if the wine is labelled with one of the nine sub-regions, which specialise in particular grape varieties, the range extends from 9% to 14% ABV. Additionally, Vinho Verde made from the single varietal Alvarinho can be between 11.5% and 14% ABV. Finally, 'late harvest' Vinho Verde, made from over-ripe grapes with higher residual sugar content, normally has an alcoholic strength of around 15% ABV.

The Vinho Verde DO production area, demarcated in 1908, covers approximately 7,000 km² and 21,000 hectares of vines spanning the North-West of the country across the region known as Entre-Douro-e-Minho. It is one of the oldest wine regions in Portugal and one of the largest in Europe with around 600 wineries comprising 2000 wine brands. A relatively mild climate means that summers are generally dry and warm with temperatures in the low to mid-20s (°C), while rainfall, which averages around 1200mm per year, can be particularly heavy in winter. The cooling influences of a dense network of river valleys which cross the region, plus the breezes coming in from the Atlantic moderate the heat of the summer sun. Soils are mostly shallow and granite-based with narrow bands of shale also present.

Although many modern vineyards are dedicated to grapes alone, traditional agricultural practices led to a distinctive method of high trellising, where vines trained on elevated poles form a flat, shady canopy under which other food crops can be grown. The extra height and shade thus obtained enables both the air to flow freely around the grapes, greatly reducing the risk of mildew from the humid soil and offers protection from the sun for the ground crops.

This is not an exclusive list and others are used, particularly within blends

Known as Albariño across the border in Galicia, it is the fullest bodied of the Vinho Verde white grape varieties with typical characteristics of peach, nuts, honey and tropical fruit. Grown mostly in Monção and Melgaço, it can show good ageing potential.
A grape variety best grown inland, it produces wines with high acidity plus notes of citrus, apple and pear.
A high quality, fruity varietal, grown especially in Baião, with typical notes of orange, peach, nuts and flowers.
An inland-growing varietal which prefers drier soil, it produces a refined, crisp style of wine with mainly citrus flavours.
Grown throughout the region, although best in coastal areas, this grape is gaining increasing recognition, both as a single varietal and for use within blends. Highly aromatic, it shows citrus and floral notes, minerality and gives good length to a wine.
Also grown throughout the region, this grape variety produces elegant wines, redolent of orchard fruits, with relatively low acidity.

This is not an exclusive list and others are used, particularly within blends

Grown principally in Monção and Melgaço, it produces light, delicately aromatic, ruby-coloured wines.
Grown in several sub-regions, it produces crisp, fruity wines, often with hints of grapefruit.
Grown mainly in the Basto sub-region, it produces wines with typical notes of red fruit.
Known as Souson in Galicia, it is grown throughout Vinho Verde and is responsible for the majority of its red wines. Indeed, it accounts for nearly 40% of the grapes grown in the whole region. It is used to make relatively light, but astringent, red wine styles with typical forest fruit characteristics and a deep colour due to the grape's red flesh. In the Douro Valley, it is called Souzão and is used mainly to colour wine, including Port.

Despite concerns over the pace of change, many independent producers are now being more experimental and concentrating predominantly on the quality of the wine rather than on quantity. This is leading to drier, richer and less spritzy styles with greater ripeness of fruit evident on the palate and improved export sales, particular to the US, with a growing base of new consumers. Recent figures, as reported in the drinks business, show how Vinho Verde exports to the UK rose in value from €1.3 million in 2012 to €1.5m in 2013, while the US remains the largest market with €9.5m worth of the wine, equating to 4.3 million litres. Overall, out of the 87 million litres wine produced, 19.5 million litres (37.4% total sales) were exported in 2013 to over 90 markets. Vinho Verde can certainly no longer be regarded as a wine for local consumption only! 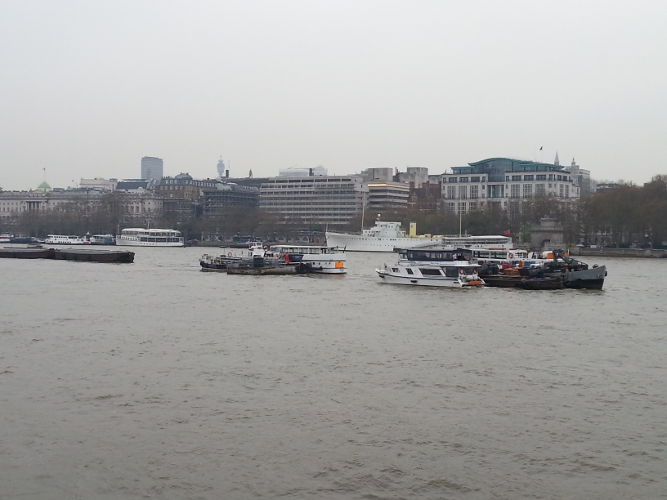 While London was coping with the smog-filled blanket caused by a mix of Saharan dust-clouds, itinerant continental urban pollution and normal (sic) city emissions, I had great pleasure in attending the Vinho Verde tasting in London on 2nd April 2014. Many producers were represented, showcasing their wines made with different grape varieties and a range of styles. Some of these are listed below:- 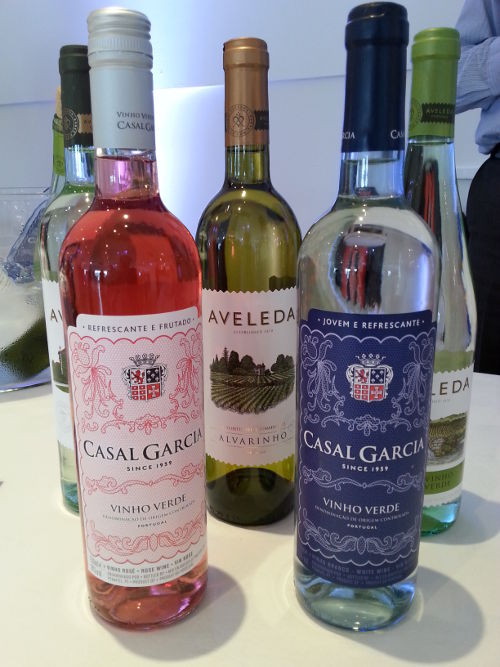 Based in the Sousa sub-region, Aveleda is the largest producer and exporter of white wines in Portugal.

Their Alvarinho 2013 is still young, but is enticingly aromatic, showing notes of citrus, peach and melon with hints of tropical fruit. It is available in the UK from Portugalia Wines Ltd..

Casa da Senra is produced by Quinta dos Abrigueiros in the Lima sub-region.

The Loureiro 2013 has a lime and grapefruit character with hints of tropical fruit, a mineral freshness and a touch of honey on the finish. It is available in the UK from Lea & Sandeman. 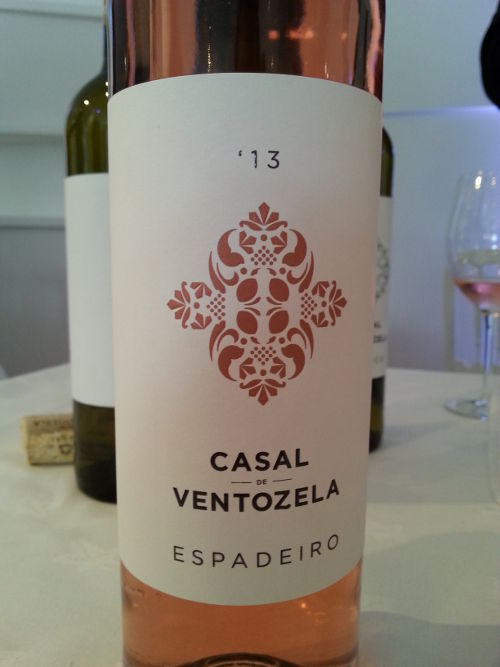 Their Espadeiro Rosé 2013 is fresh, fruity and mineral with notes of strawberry, raspberry and hints of grapefruit.

This is a 30-hectare estate in the Amarante sub-region.

Their single-varietal Azal 2103 has a rounded, almost Albariño-like nose of ripe stone fruit, followed on the palate by notes of peach and orange plus a good balance between acidity and residual sugar content.

Provam is a local association of ten growers from Monção, formed in 1992, producing wines from Alvarinho and Trajadura.

Portal do Fidalgo 2012 has a floral, honeyed nose, while the rich palate shows notes of green apple, honey and apricot with a lime-like acidity and mineral freshness.

Varanda do Conde 2012, made from 70% Alvarinho and 30% Trajadura, is fresh, fruity and tangy with hints of citrus and tropical fruit. 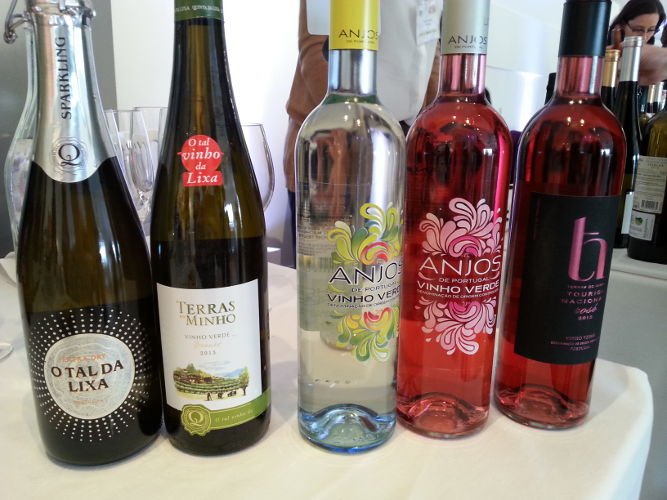 Their Loureiro 2013 is intensely floral, fruity, fresh and elegant.

Their Terras do Minho Touriga Nacional Rosé 2013, the only 100% Touriga Nacional made in the Vinho Verde region, is aromatic and fruity with notes of red berries, cherries and a good finish.

The estate's wines are available in the UK from Berkmann Wine Cellars and Averys Wine Merchants. 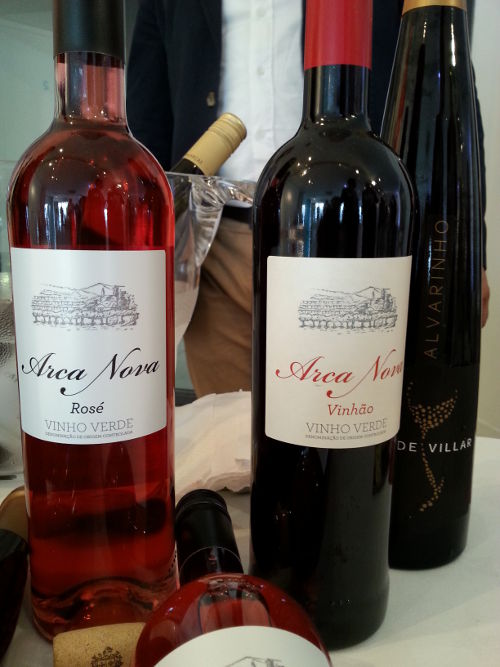 This is a consistently good producer from the Sousa sub-region, whose wines I have recommended many times.

The Arca Nova Rosé 2013, made from 100% Espadeiro, is fresh and fruity with good depth of flavour, characterised by raspberries, strawberries and cherries.

The Arca Nova Red 2013, made from 90% Vinhão and 10% Espadeiro, is a good example of a Vinho Verde Tinto. With the typical dark ruby colour, its characteristic fresh and fruity aroma leads on to a concentrated palate of cherries and cranberries plus relatively soft tannins. This would make an interesting match for a summer BBQ.

The wines are available to the on-trade in the UK from Casa Leal.

From an estate dating back to the 1500s, the company was revived in 2011. Located on the right bank of the Douro river, in the sub-region of Baião in the southern corner of Vinho Verde, their innovative approach to winemaking encompasses both Portuguese and international grape varieties.

The Edição Nacional Avesso 2013 is fresh and mineral with notes of orange, grapefruit and a hint of nuts and butterscotch from the short period of bâtonnage (lees stirring). A great wine to pair with grilled fish.

This winery hails from the Cávado sub-region. Their Colheita Selecionada 2013, made from a blend of three indigenous grape varieties (Loureiro, Trajadura and Arinto) is floral with notes of citrus and tropical fruit, a hint of creaminess on the mid-palate plus a tangy finish typical of the Arinto grape variety. This wine has some depth and richness, which would make it a good match for many dishes, including the wonderful bacalhau (salted cod). 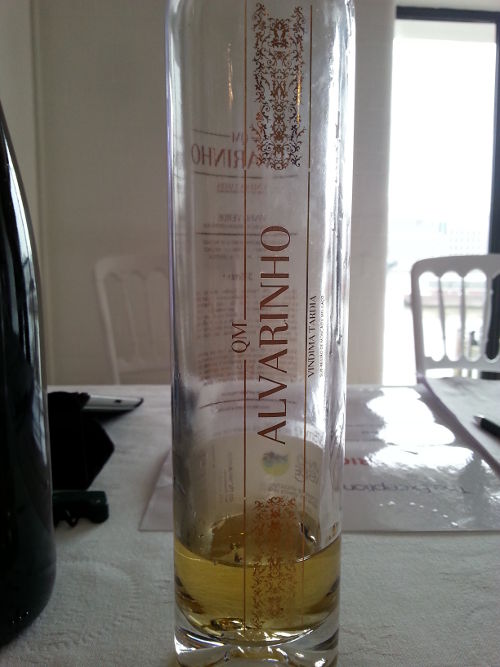 This company is from the Monção Melgaço sub-region.

Their Torre de Menagem 2013, made from Alvarinho and Trajadura, is elegantly aromatic and displays characteristics of pineapple and lemon.

The Alvarinho Vindima Tardia 2010 is a late-harvest sweet wine with notes of honey and apricot, a hint of vanilla plus well-balanced acidity.

The wines are available in the UK from The Exceptional Wine Company. 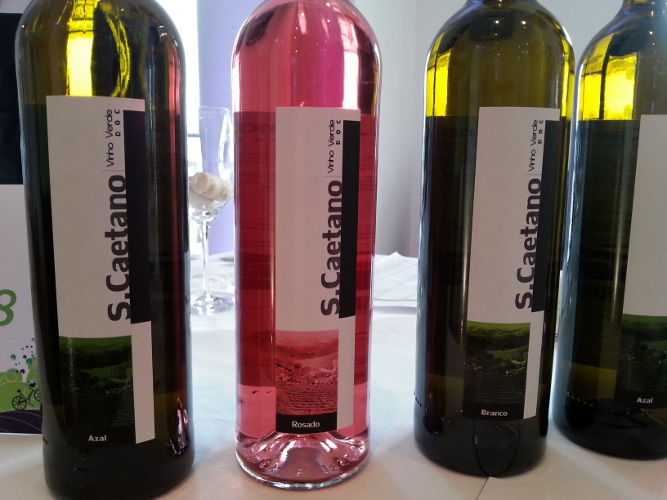 This winery is located at the Quinta da Torre, near the town centre of Marco Canaveses in the sub-region of Amarante.

Their Azal 2013 shows notes of pear and citrus, while their Arinto 2013 has a refreshing minerality with hints of melon and a salty tang.

In contrast, the Espadeiro Rosé 2013 displays a fresh, red berry and cherry character with good acidity. 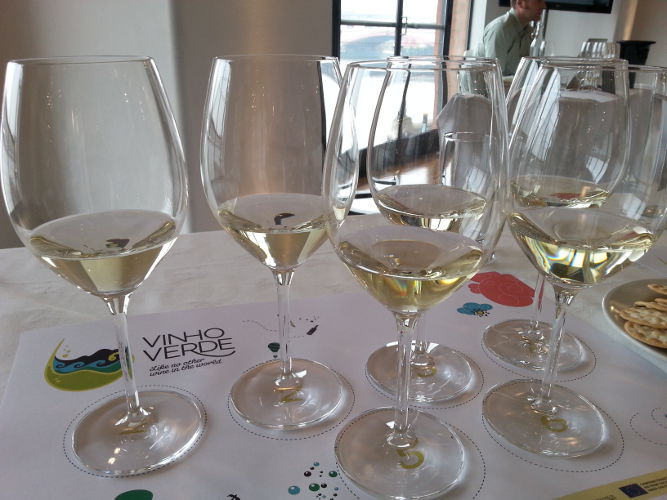 Many Vinho Verdes have won international awards. Although not represented at this tasting, it is worth mentioning Casa de Vila Verde, one of the oldest estates in the Sousa sub-region dating back to the 17th Century, but modernised in 1996. They won a Silver Medal at the NYIWC 2011 for their fresh, fruity and mineral 2010 Vinho Verde white. 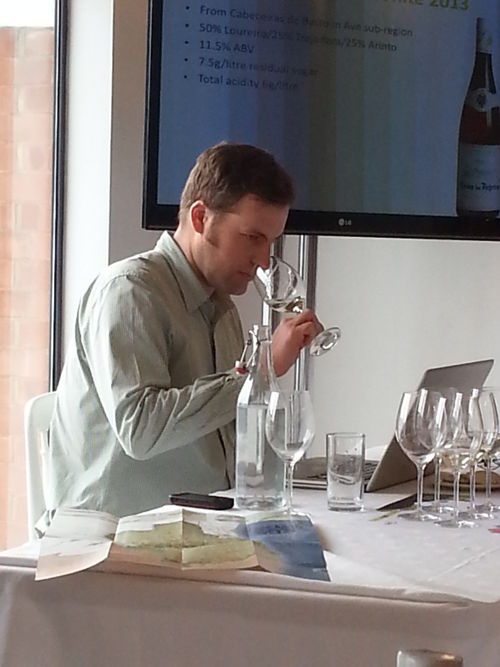 It was a pleasure to attend journalist, wine critic and member of The Wine Gang David Williams' excellent and informative seminar and tasting of a selection of wines, some of which are included above. He noted the growing global success of Vinho Verde as part of a general "rise in fashion for North-West Iberian wine with its effortless feel, aromatic potential and great value". Unlike some trends, which are a matter of style over substance, this is one definitely worth supporting for its merits alone and I look forward to toasting this year's and future summers with a glass or many of the vinous joy that is Vinho Verde! Saúde!

Further information and resources can be found on the Vinho Verde website.

This article can also be found on the Alcohol Professor website.