Redefining Bobal for the modern era 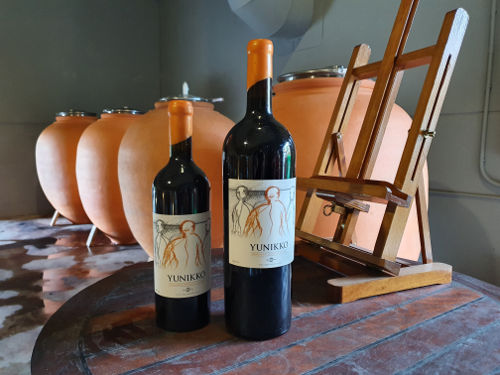 The DO Utiel-Requeña, named after two neighbouring towns, is located around 75km inland from the city of Valencia. With a winemaking tradition dating back at least 2,700 years, it became a denominación in 1957, although it remains one of Spain's lesser known wine regions internationally. This small, almost circular plateau of about 1,800 km2 contains around 34,000 hectares of vines at an altitude of between 600 and 900 metres.

The region provides the main home for Bobal, the country's third most planted grape variety. The name is derived from bovale, or bull, as the irregular cone-shaped bunches are supposed to resemble a bull's head. Well-known for its resistance to phylloxera, Bobal finds its most suitable terroir in Utiel-Requeña. Here, the soils are sandy and rich in calcareous clay with a high limestone content. Grown in central-east Spain for well over 500 years, the grape is also planted east of Cuenca and Albacete within the DO La Manchuela. 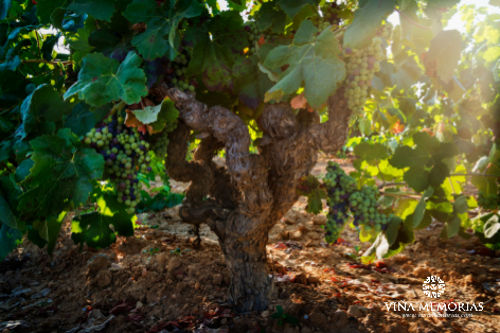 After Airén and Tempranillo, it accounts for 8% of all varieties in Spain and for around 80% of the planted area in its homeland of Utiel-Requeña. It's a vigorous, high-yielding, fairly upright plant, throwing out long trailing shoots. Budburst is in late April/early May, with harvest in September and October. As a variety, it creates deeply coloured wines with firm tannins, good structure and potential for cellaring.

Bobal's aromas are said to be reminiscent of the Mediterranean forest with lavender, rosemary and pine on a background of ripe fruit. Rosé expressions are strongly aromatic and intensely flavoured with red berry notes particularly prominent.

Previously regarded more as a workhorse grape for bulk wine production, it's now being taken much more seriously … and for good reason. Both the grape and the region are experiencing a resurgence due to the new generation of winemakers who are working and enhancing the unique qualities of this dark-skinned varietal, abandoning traditional techniques like 'doble pasta'. Meaning 'double pulp', it was a common practice to add extra grape skins and pulp to the fermenting grape juice to impart extra colour and tannins.

Wineries, such as Bodega Mustiguillo, Dominio de la Vega and Viña Memorias are making a great effort to produce high quality terroir-driven wines. Similarly, Grupo Coviñas, a 'secondary cooperative' formed in 1965 to represent over 3000 farmers and covering around 41% of the land under vine, has become a very modern, quality-driven winery.

Now production is much less aggressive, using macro- and micro-oxygenation plus longer maturation periods, larger oak barrels and a revival of the traditional clay jars for fermenting and ageing wine (described later). 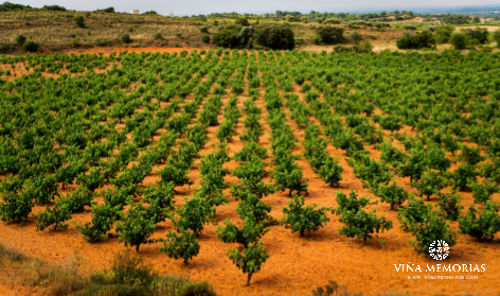 Viña Memorias is a boutique family winery with 18 hectares of vineyards in Utiel-Requeña, founded in 2016 by entrepreneur, Annie Molco. She created Viña Memorias as a homage to her family heritage and to re-write the modern history of the wines of the region. Since its first vintage, the wines have been rated 'excellent', including a 90 point score from Guía Peñín, the country's most prestigious listing of wine reviews. 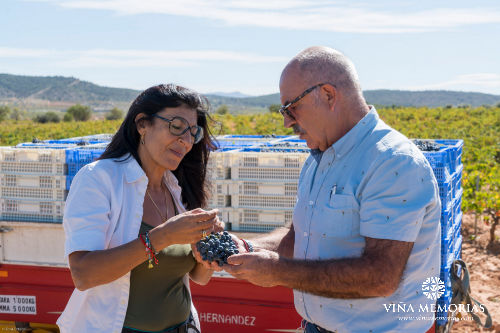 "Viña Memorias is at the heart of the land of Bobal - a Spanish treasure yet to be discovered!"

The winery makes single varietal wines and is committed to celebrating Bobal, citing its "strong Spanish name, its character, its suitability for ageing and the beauty of their vineyards which are over 65 years old." They also grow white grapes, including Macabeo and Merseguera.

Following ancient Roman practices, most of the old vines over 30 years old are gobelet-trained. This includes both Bobal and Macabeo. "We personally consider that we have a treasure in our hands", says Armando Caracena-Molco, Head of Global Business Development at the winery. "We are happy to sacrifice productivity for quality, uniqueness and preserving our family heritage."

Vineyards are mainly south and east-facing with an average altitude of 800 metres. They enjoy a unique combination of Mediterranean and Continental climates with 2,800 hours of sunshine and only 450mm of rain per annum. Summers are dry and warm with temperatures reaching 40°C. Winters are long and cold with night frost, temperatures plummeting to -10°C.

During the growing season, low night-time temperatures with Mediterranean breezes provide important cooling and humidifying influences. Warm daytime winds then blow in from the interior plateau of La Mancha to dry the vines. This combination offers an excellent microclimate for viticulture.

Additionally, thermal oscillations favour a slow and gradual maturation of the fruit. As a result, the grapes have good sugar content with a high concentration of tannins, polyphenols and colour. Moreover, despite the high summer daytime temperatures, Bobal provides a good balance of pH and natural acidity, not requiring adjustments during winemaking.

Vegetation in this region is strongly marked by the influence of the Mediterranean and vines grow alongside almond, walnut, olive, pine and oak trees. The winery believes that the abundance of aromatic plants too, such as fennel, rosemary and thyme, influences their wines.

Utiel-Requeña's terroir is ideally suited to organic and sustainable wine production. The dry conditions - plus well-drained soils and thick-skinned indigenous grapes - form a natural defence against fungal diseases. Therefore at Viña Memorias, they do not use any chemicals in their vineyards and hope to have organic certification from the next vintage.

The flagship variety, Bobal, is also extremely drought resistant, meaning less water is needed for irrigation. Indeed, they follow a strict rain-fed method in order to obtain more quality concentration in the grapes and to allow the vintages to express themselves.

"A great wine is the reflection of the land that nurtured it", says Armando. "Thanks to the unique conditions of our terroir, our vine-growing methods are free from herbicides and insecticides. We are devoted to respecting the characteristics of our environment, in order to present the maximum expression of our terroir in our wines."

Parcels contain between 2,800 and 3,000 vines per hectare with production limited to around 3,500kg of grapes per hectare. They prune twice a year, once in winter and once in spring, in order to concentrate the energy on the best canes.

Grapes are hand-harvested using small crates of 15kg to avoid damaging the berries. Once at the winery, they are cooled to 6°C for 24 hours, before being gently pressed. Only the free-run juice is used. The wines are vegan, with bentonite used for fining and, since 2016, all the wines are Kosher too.

"I see the DOP Utiel-Requeña as a very old winemaking region, with dynamic and creative new oenologists re-writing its modern history with high-quality, authentic wines."

Requeña sits on top of a network of 300 caves, most of which were used as wine cellars or for storing grains, as war shelters and even as ossuaries for storing bones. Traditionally, large clay jars called tinajas were kept there and used to ferment and age wine.

Because of their porosity, "tinajas enable higher micro-oxygenation", explains Armando. "They highlight Bobal's acidity, while retaining its fruit-forward character. What we are looking for is maximum expression of Bobal's flavours and aromas."

The winery has dedicated its first vintage to honour Rabbi Moshe ben Maimon, also known as Rambam. He was renowned in medieval Spain (Sefarad) as a philosopher, theologist, doctor and Rabbi. He also recommended the moderate consumption of wine for good health and as a remedy against disease.

He was born in the city of Cordoba, but he travelled around Spain, Morocco and Egypt. Although an important figure in Spanish medieval times, he is not well-known among non-Jewish communities. Therefore, as Annie Molco's family are Sephardi (Hispanic) Jews, they chose Rambam as the perfect representative of their name and history.

Two examples of their wines illustrate how Bobal can be vinified in different ways resulting in unique expressions of this grape variety in two very good vintages. 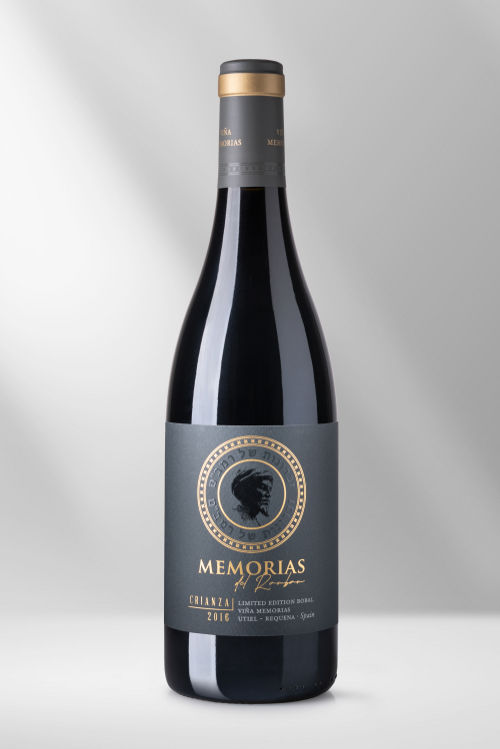 This Crianza is 100% Bobal from vines with an average age of over 65 years old. Cold maceration and fermentation took place in stainless steel, followed by 12 months' maturation in 225L new American oak barrels and a further four months ageing in bottle before release. Only 6,200 bottles were made, including 120 magnums, with the label showing a bust of Rambam. The wine received 89 points from Guía Peñín 2021.

Nose: Black cherries, blackberries and raspberries with some prunes, a touch of vanilla and woody spice notes of sandalwood and cinnamon.

Palate: Juicy fruity notes with black cherries, prunes and cinnamon prominent. Hints of cloves and mint develop mid-to-end palate and the finish is long with touches of sweet, earthy beetroot and fine black pepper spice. There's good acidity with soft, balanced tannins. At only 12.5% ABV, this wine packs well above its weight with good mouthfeel, roundness, structure and richness, while retaining a light, elegant touch. 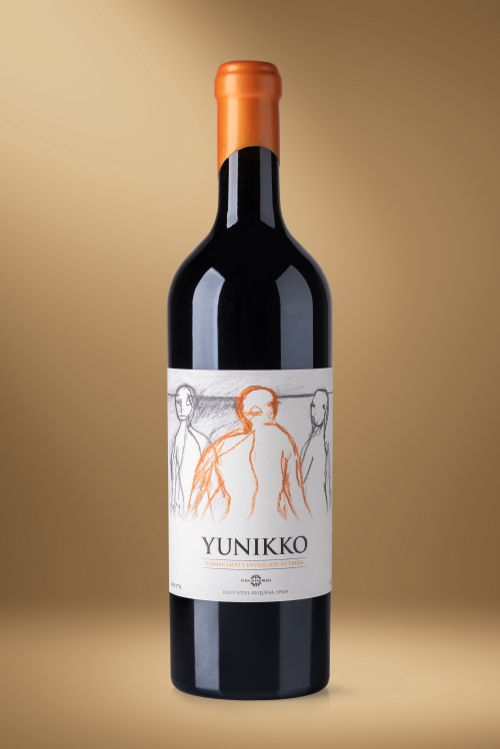 2018 is the first vintage of their wines made in tinajas. Atypical summer rains delayed the harvest, but end-of-season conditions were good overall and the fruit quality was excellent.

The winery's flagship wine YUNIKKO, made from their oldest Bobal vines (over 90 years old), is fermented and aged in new 1000L tinajas for 14 months. Only 1,770 bottles were made, including 30 magnums and no stabilisation was used during vinification. "We meant to keep it as original as possible", says Armando. "This is why we mention on the bottle that 'having respected the integrity of this wine, natural sediments may appear in the bottle'." Winemaker Diego Morcillo adds: "We were looking to showcase the varietal character and terroir of the vineyard."

The label shows artwork by Gilbert Rigaud (1912-2003), a French painter from Aix-en-Provence, who was part of the École de Paris art movement in the last century. Annie Molco's family wanted to commemorate his name with a unique wine, as he was closely related to them. YUNIKKO received 90 points from Guía Peñín 2021.

Appearance: Dark red with a tinge of purple.

Nose: Floral and intensely aromatic with notes of blueberries, blackberries, cherries and some red berry brightness plus cloves and cinnamon with a slight hint of graphite too.

Palate: Notes of blueberries, cherries and a hint of wild strawberries with sweet spice notes of cinnamon and cloves plus a touch of earthier cumin. An edge of salty liquorice and graphite develop on the mid-palate with some white pepper on the elegant finish. There's good acidity with integrated tannins and decent length.

A shortened version of this article was originally produced for Imbibe Magazine in November 2020.