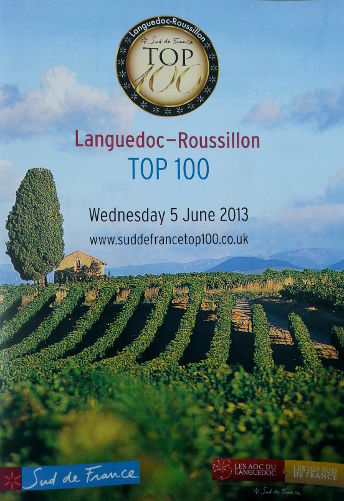 A lovely Sud de France wine tasting, at London’s OXO Tower on 5th June, showcased the region of Languedoc-Roussillon, one of the world’s most innovative and exciting wine making areas. A judging panel, comprising MWs, esteemed wine writers and other industry professionals, selected their "Top 100", but there were many other excellent wines to sample. Terroir is a major factor in all the wines with judicious use being made of many different soil types, altitudes and vineyard orientations. Many of the wines were 14% ABV or more, but were perfectly harmonious and well-balanced, not feeling overly alcoholic at all. Time constraints curtailed my visit, but here are some of the wines which impressed me the most.

Clos Des Nines produces wines with lightness, finesse and minerality, due in part to the sea deposits present in the soil, in particular oyster fossils. L’Orée 2011, made from a blend of 50% Grenache Noir, 25% Syrah and 25% Cinsault, was light and fresh and full of ripe red fruit – a good match for meaty fish or lean, gamey meat like pheasant. The O du Clos 2008 had more depth and complexity with black fruit, pepper spice and a hint of liquorice on the palate. This wine would go well with beef, cheese or even chocolate.

Condamine Bertrand’s Elixir 2011, made from 84% Syrah, 8% Grenache Noir and 8% Cabernet Sauvignon, spent one year in barrel and showed immediate ripe fruit, followed by secondary notes of pepper and cinnamon spice. This wine gained a well-deserved place in the Languedoc-Roussillon "Top 100"

Another "Top 100" wine was Divem’s unoaked Les Initiales de Divem 2011. Made from 80% Grenache Noir and 20% Syrah, this 15.5% ABV wine, showed red and black fruit on the nose with plenty of spice and similar notes on the palate with hints of cherries and dark chocolate on the finish.

Château Bas D’Aumelas produces organic wines from a vineyard 300 metres above sea-level. Their Château Bas Egerie 2010 won "Best Grès de Montpellier" and is also featured in the "Top 100" here. This was one of my favourite wines of the entire tasting and since they only made 1800 bottles, I’m pleased to have had the opportunity to try it. Made from 95% Syrah and 5% Grenache Noir, the nose has notes of black fruit, gentle spice and a touch of mint. The palate has similar characteristics, bursting with ripe fruit and some vanilla too. Their second entry in the "Top 100" was a white wine, Château Bas Classique Blanc 2011, made from 60% Grenache Blanc of which 10% was aged in oak for 12 months, 35% Roussanne and 5% Viognier. Despite the latter grape’s small percentage, its presence is definitely felt. The nose is floral with notes of apricot, while the palate is honeyed and fruity with characteristics of apricot, pear and a delicate vanilla touch. Their other white wine, Barathym Blanc 2011, while not gaining a place in the "Top 100", was light, fruity, smooth and fresh with notes of peach, honey and lime.

Domaine de Cébène produces low-yield organic wines with smooth and delicate flavours. Belle Lurette 2011, made from 70% old-vines Carignan Noir plus Grenache Noir and Mourvèdre is well-structured, deep, smooth and spicy with fruits of the forest on the nose and palate. Felgaria 2011, made from 80% Mourvèdre and 20% Syrah, is another "Top 100" wine. With plenty of fruit and spice, this shows great finesse with delicate hints of meat juices on the mid-palate. Like many wines at this tasting, it has great ageing potential. The Domaine also produces an IGP Pays d’Oc , Ex Arena 2011, made from 85% Grenache Noir and 25% Mourvèdre. This wine has gentle, spicy and fruity characteristics with hints of beetroot. 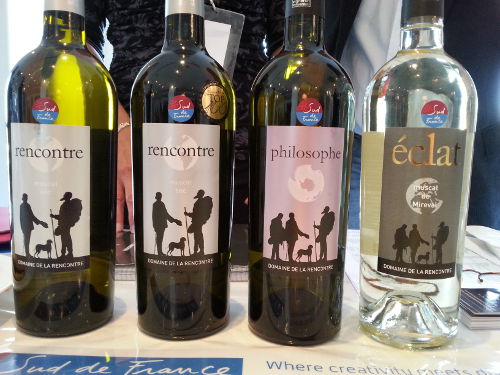 Domaine de la Rencontre specialises in Muscat, producing aromatic dry wines, as well as rich late-harvest styles. Their Rencontre 2012 will be perfect for drinking in about 4 months’ time, but already shows great quality. Another "Top 100" wine, it demonstrates good concentration of fruit on the nose and palate with a touch of minerality. Philosophe 2012, a medium-dry expression of Muscat à petits grains has intense fruity aromas and flavours, reminiscent of peaches and apricots. However, the pick of the bunch is their delicious AOC Muscat de Mireval, the 15.5% ABV Eclat 2012, a vin doux naturel. This wine won 2 stars in the Guide Hachette 2013 and is brimming with intense fruit and honey plus some herbal notes too – a perfect accompaniment to blue cheese or spicy sausage.

Domaine La Cendrillon, from a small village near the Roman city of Narbonne, produces organically certified wine from 10 grape varieties. Inédite 2008, made from Syrah, Grenache and Carignan, was aged for 18 months in oak, yet rather than infusing the wine with overt woody notes, this merely softens the raspberry, blackcurrant and fruits of the forest characteristics that the wine shows. Well-rounded and smooth, this wine should be aged for at least another two years, to bring out further complexity. Four thousand bottles a year are made of La Cendrillon N°1 2008, composed of 40% Syrah and 60% Mourvèdre. The nose and palate are full of juicy ripe fruit plus gentle vanilla, black pepper and cinnamon spice notes. This wine is a delight and also has great ageing potential.

I previously mentioned Château Spencer La Pujade in my article on February’s First Date for France tasting. Their Le Bosc 2011, made from 100% Mourvèdre, 30% of which was matured in new French oak, oozes black fruit and pepper spice on the nose, while on the palate, fruits of the forest and a slight savoury quality come through. Their Carignan Vieilles Vignes 2011 demonstrates great concentration of fruit and an exceptionally smooth mouth feel, due in part to the unusually sandy soil on which the vines grow. Ripe cherries and blackcurrants plus gentle black pepper and spicy notes lend an elegance to this wine which can age for a few more years.

Vignobles Dom Brial benefit from five different soil types, low yields and very healthy vines. Consequently they are able to produce wines of intense fruit concentration and, although not certified as organic, they use sustainable green energy practices. Their Les Pins & Co. 2012 rosé, made from 80% Grenache Noir and 20% Syrah, was crisp, floral and fruity with hints of melon, strawberries and cherries accompanied by gentle peppery spice notes. Their AOC Côtes du Roussillon Villages Château Les Pins Rouge 2009, made from 50% Syrah, 40% Mourvèdre and 10% Grenache Noir, is intensely aromatic and fruity with notes of plum, red and blackcurrants, black pepper, vanilla and cinnamon on the nose and palate. This should age well over the next 10-15 years. Dom Brial also make IGP Côtes Catalanes wines and their Le Pot Dom Brial 2012, made from 80% Muscat à Petits Grains and 20% Muscat d’Alexandrie, is fresh, fragrant and fruity with hints of herbs and orange in addition to the unmistakeable Muscat grapiness. The 13% alcohol level is not overpowering and for a food match, this would be a good wine to accompany asparagus, in particular.