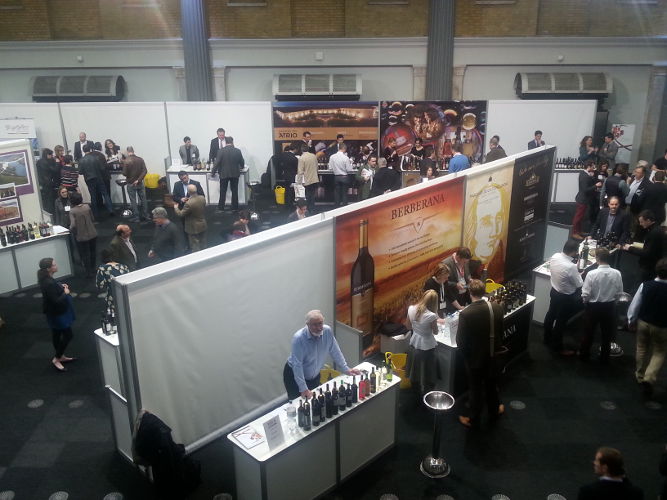 I love tapas - really … totally … absolutely, but with one caveat - they have to be authentic, served in a Spanish bar, preferably in … wait for it … SPAIN, accompanied by a small beer or glass of wine. It all fits together so well - the food, the drink, the people, the language … in other words, the complete atmosphere and above all, it has to be natural, not forced, not a copycat version. Keep it real and I'm happy!

I have a rule when travelling abroad to countries where English is not the first language. If I have a smattering of the local lingo, I refuse to go to a bar or restaurant displaying an English menu, as I know the food won't be authentic and perhaps the wine choice won't be up to scratch either. Friends can vouch for this, but it's stood me in good stead when searching out great food and wine in Spain, Germany, Portugal and other countries.

Having spent some time in Spain in the 1980s, where I acquired my taste for tapas, I only later developed a real appreciation of the country's wines. A pivotal moment came when I attended a tasting given by the late great Spanish wine expert, John Radford. He introduced me and other participants to a grape variety, still unknown to this day to many people around the world and indeed within Spain itself. That grape was Godello - a personal revelation, as it effectively stuck out its tongue at Chardonnay and said "Hey look at me - I can make great wine too and I'm interesting, with my typical apple, stone fruit, honey and mineral characteristics bolstered by a deliciously creamy mouth feel!"

And so it was that when I bought wine in London or went back to Spain, Godello is what I often looked for. I'm now pleased to see more wines made from this indigenous Spanish grape starting to become available in the UK, but it doesn't stop there and you need only look at the more authentic tapas restaurants in London to see this reflected in their wine lists.

There is a New Spain, to quote the title of John Radford's superb book. There are now over 60 regional demarcated wine regions in the country, many new, which have lifted the reputation of and interest in Spanish wine to almost dizzying heights. Regional individuality is key - going beyond renowned areas like Rioja - as is investment in new technology, innovation and modern approaches and ideas to winemaking in general. A huge variety of terroir translates into an enormous diversity of wine styles from light and aromatic to intensely powerful and tannic. Both the big guns and small family wineries are building on this wealth of indigenous and international grapes planted throughout the country. With this in mind, I made a point of visiting the 25th Annual Wines from Spain Trade Fair in London on 20th March. Showcasing wine from around the country, there were also two featured "help yourself" tastings - 'White Wines from Indigenous Grape Varieties' and 'Tempranillo' - both of which gave a glimpse into the gamut of styles available from this European wine mecca. My personal highlights, in order of tasting, are mentioned below:- 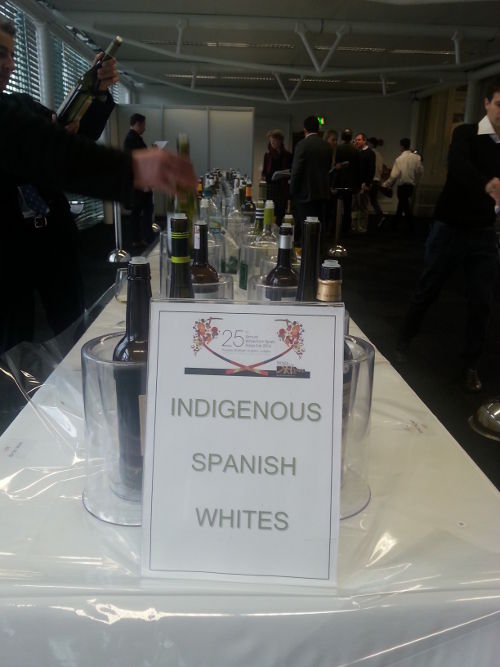 55% Tempranillo Blanco, 45% Viura
Notes of pear on the nose leading on to melon and a touch of orange on the palate plus good acidity.
100% Malvasia
Notes of apple, flowers and light honey on the nose leading on to apple, citrus and a touch of honey on the palate.
100% Albarín
The rare Albarín Blanco grape, genetically different from Albariño, is indigenous to the south of León and Asturias. This wine from Pardevalles is aromatic with notes of beeswax and honey on the nose, while the palate shows grapefruit and honey plus good acidity.
100% Verdejo
Fresh, clean and crisp on the nose with gentle notes of pineapple, apple and aniseed, while the palate shows hints of lime, nuts and herbs plus minerality.
100% Verdejo
An elegant nose of pear, pineapple and white flowers with gentle hints of fennel and a touch of butterscotch leading on to a similarly rich and well-structured palate.
92% Treixadura, 4% Godello, 2% Albariño, 2% Loureira
Pineapple, stone fruit and cashews on the nose continuing on to the creamy palate.
70% Albariño, 15% Loureira, 10% Treixadura, 5% Godellora
Intensely aromatic with notes of flowers, nuts and honey continuing on to a well-structured, fresh palate with good acidity.
100% Godello
A delicate nose of apple, white flowers and cut grass leading on to a smooth palate of apple, nuts and herbs. 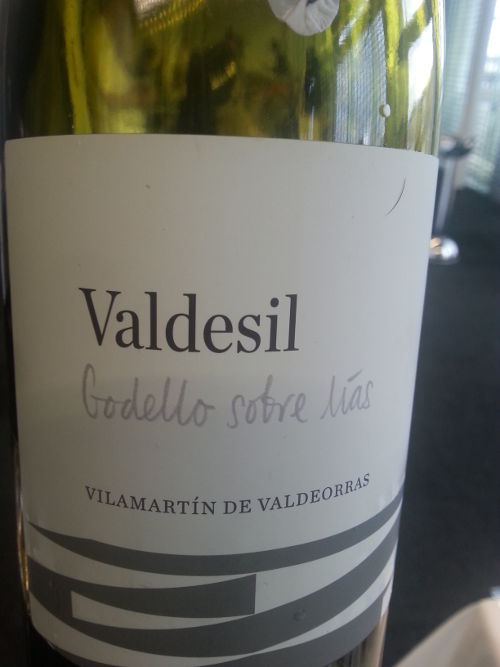 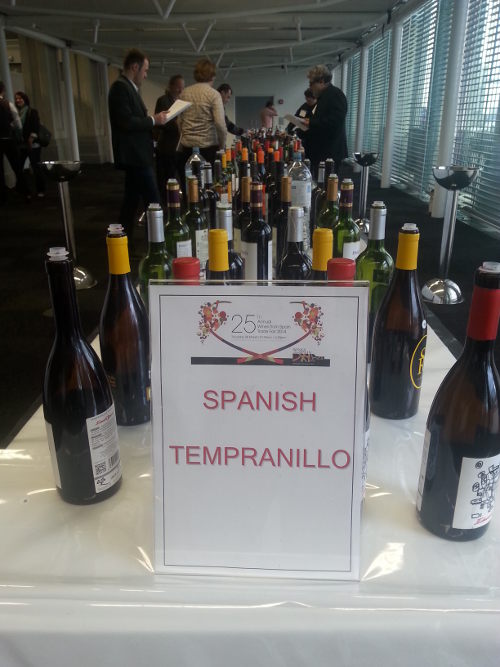 100% Tempranillo
Superb value wine showing notes of blackberries, spice, a touch of wood and smoke plus hints of game.
85% Tempranillo, 10% Cabernet Sauvignon, 5% Merlot
An elegant, smooth wine redolent of ripe berry fruit and cherries, smoke and spice with gentle oak notes. The company also makes delicious artisan Manchego cheese and flavourful olive oil with a peppery bite. Their 2012 is described later on.
100% Ull de Llebre
Fresh, herbal and fruity with notes of cherries plus good acidity and tannins.
85% Tempranillo, 10% Graciano, 5% Mazuelo
An elegant, classic Rioja style with red fruit, soft vanilla oak notes, well-integrated tannins and minerality. No surprise this was Decanter's No. 1 'Wine of the Year 2013'.
85% Tempranillo, 10% Graciano, 3% Mazuelo, 2% Garnacha Tinta
An aromatic and fruity nose with notes of raspberries and blackberries carrying on to a well-rounded, fruity palate. 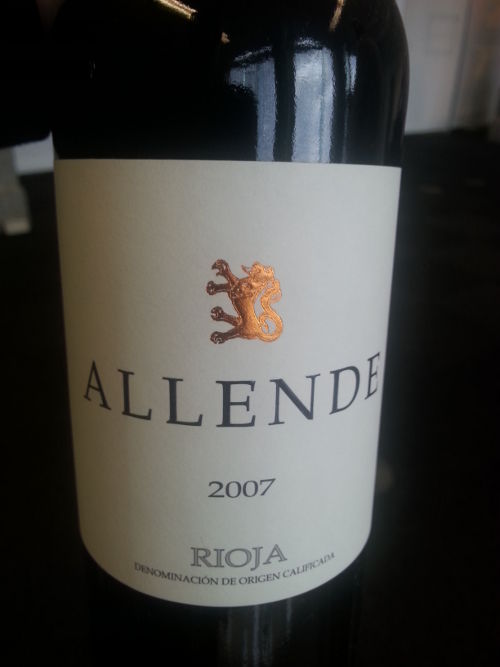 100% Tempranillo
A beautiful wine from a sometimes difficult vintage showing rich, fruity notes of red and black berries with hints of cedar wood and tobacco. Superb!
100% Tinta del País
A concentrated fruity character on the nose and palate, with notes of raspberries, vanilla, spice and good tannins. 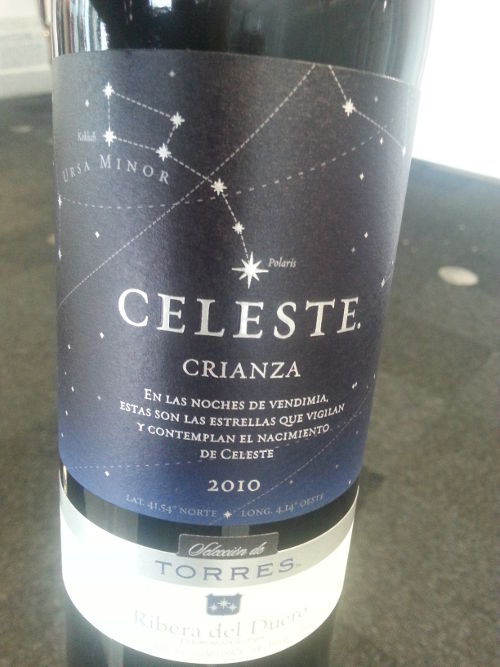 100% Tinto Fino
The first of the wines I tried from this ground-breaking family company, which has been producing wine in Spain since 1870. An intense, fruity and spicy nose leading on to a full-bodied palate of black fruit, ripe tannins and a touch of smoky oak. 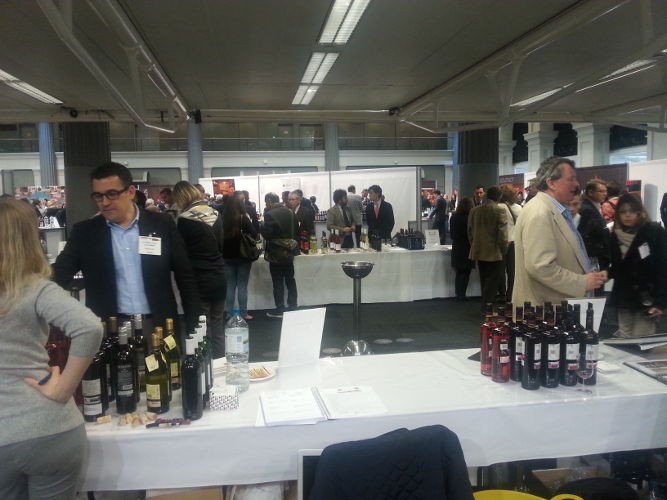 Chardonnay, Macabeo, Parellada, Xarel-lo
With 36-month ageing in bottle prior to release, this is an elegant Cava with grapefruit, toast, nuts and delicate herbal notes. 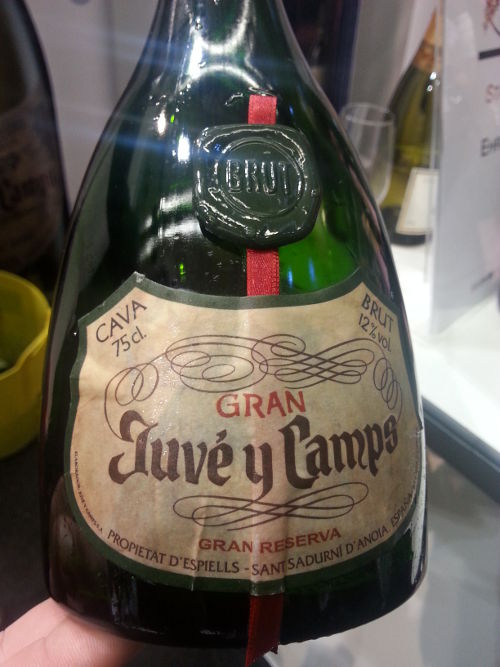 Chardonnay, Macabeo, Parellada, Xarel-lo
Top-quality Cava from this renowned producer, showing notes of tropical fruit, lime, white flowers, honey, buttered toast and nuts.
100% Godello
A superb mineral-fresh Godello with citrus, pineapple and white peach notes opening up on the mid-palate plus a gentle nutty creaminess on the finish.
100% Albariño
A distinctive and increasingly popular grape variety, Albariño is known for its aromatic qualities with typical characteristics of stone fruit and citrus. This is a stylish example from Torres, showing floral notes combined with pear, lime and peach. 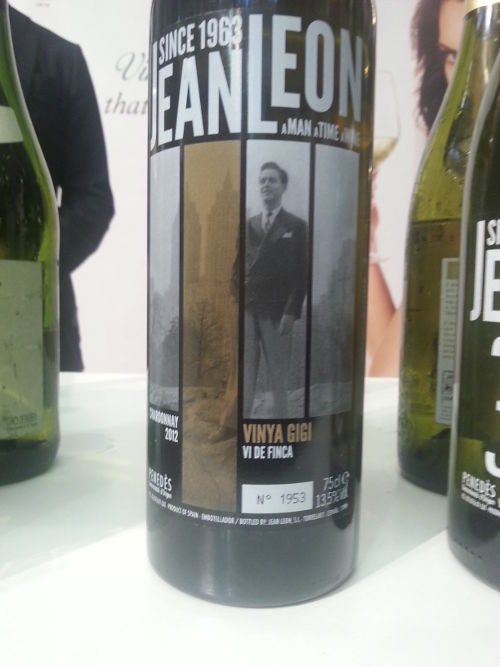 100% Chardonnay
Stunning Chardonnay from the Jean León label, the legendary winemaker synonymous with the introduction of top-quality single vineyard 'Pago' wines in Spain. Aged on its lees for approximately six months in French oak barrels, the result is elegant and creamy with notes of tropical fruit, nuts and a savoury edge.
100% Chardonnay
A supremely elegant single-vineyard, intensely aromatic Chardonnay, which exhibits notes of pineapple, stone fruit and nuts with a touch of cream and spice. 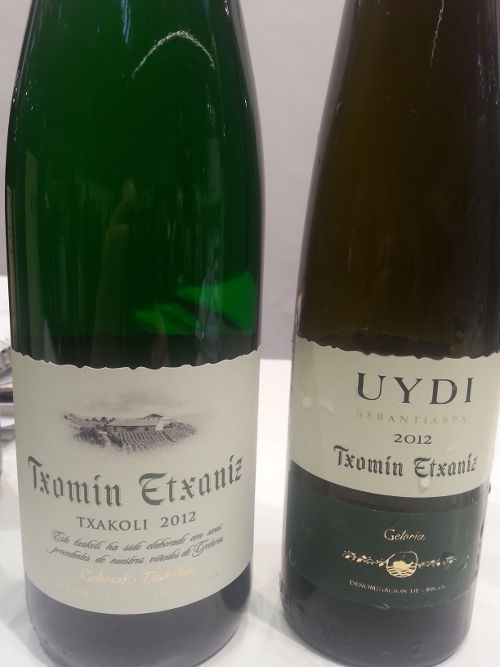 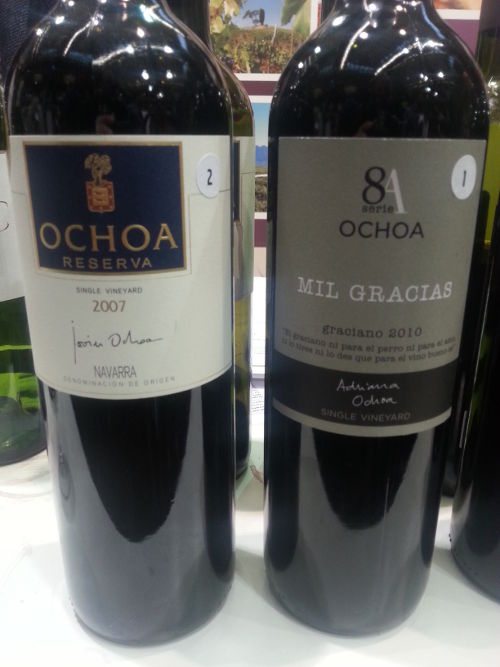 60% Tempranillo, 30% Merlot, 10% Cabernet Sauvignon
A superb, aromatic Navarran wine from a single vineyard, displaying notes of cherries, plums and black pepper spice with elegant tannins and good acidity. A wonderful example of the quality that can be achieved in Rioja's neighbouring region.
60% Garnacha Tinta, 40% Cabernet Sauvignon
Elegant notes of blueberry and spice with a savoury edge and a touch of game.
Tempranillo, 10% Cabernet Sauvignon, 5% Merlot
A youthful, fruity nose of cherries carrying over on to the palate with a touch of coffee on the finish. This wine shows good potential, needing a few more years to become more rounded and integrated. 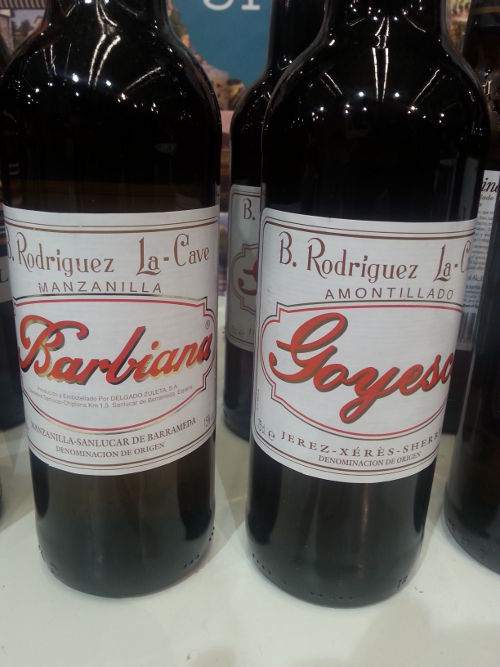 100% Palomino Fino
Light, dry, fresh and yeasty, this is a fine example of the classic Manzanilla Sherry style.
100% Palomino Fino
With over five years under flor and three under oxidation, this is an unusual and elegant sherry between a Manzanilla and an Amontillado, which retains the freshness of the former and the nutty spice of the latter.
100% Pedro Ximénez
Rich caramel, molasses, raisins and orange notes in this unctuous sweet wine.

The global relevance of the Spanish wine industry should not be underestimated. According to the drinks business, Spain, which has a larger planted surface of vineyards than any other country, has now become the world's biggest wine producer, showing an increase in volume of 41% in the past year. Moreover, Drinks International reports that the most admired wine brand for 2014 is Torres.

Modern or pioneering companies like Torres, Bodegas Martín Códax and Bodegas Beronia, or traditional yet forward-thinking wineries like Marqués de Riscal, CVNE and Bodegas Faustino have made the world wine map all the more intriguing. They've also added to my immeasurable pleasure of eating at a Spanish restaurant and especially of 'ir de tapas' - the choice of wines to go with my tapas ever more rewarding. ¡Muchas gracias, señores y señoras. Muchas gracias!