Digging for England and France at Domaine Evremond! 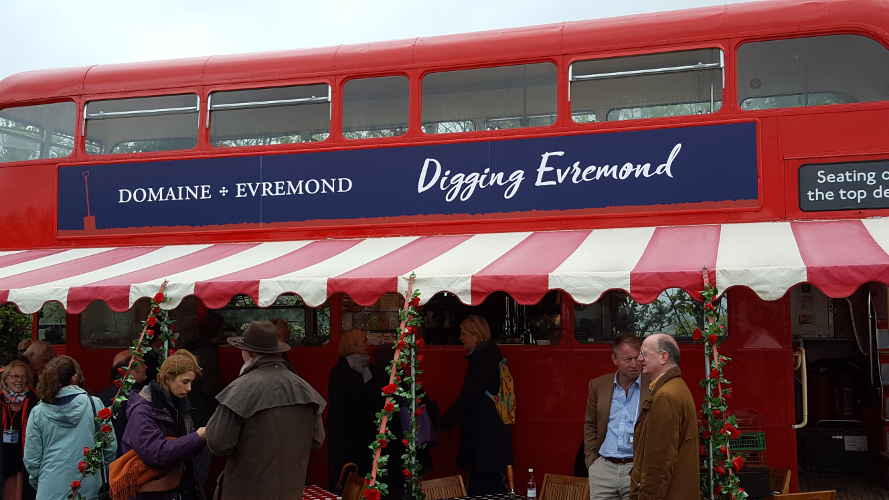 Refreshments served from the Evremond bus!

Kent isn't called the 'Garden of England' for nothing. Known as the prime UK location for growing fruit, it's no surprise that the gently rolling hills of this beautiful corner of the country are also home to some world-class vineyards and now history has been made! In the true spirit of entente cordiale, Champagne Taittinger has become the first Grande Marque Champagne House to own and plant an English vineyard, Domaine Evremond. Having acquired 69 hectares of land near Chilham, Kent in 2015, the 3rd May 2017 marked new ground (literally!), as the French planting team oversaw a ceremonial digging event to begin planting the 20 hectares (over 100,000 vines) of Chardonnay, Pinot Noir and Pinot Meunier, with plans to extend this to 40 hectares over the next two or three years. 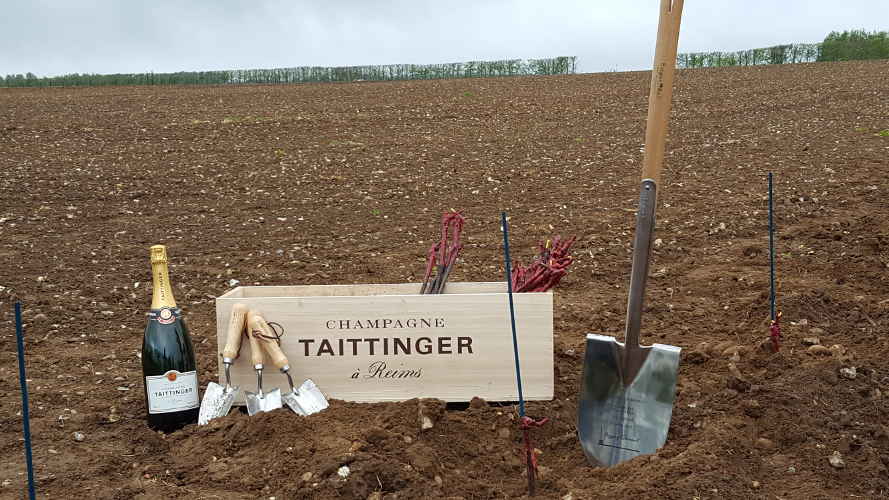 The event, a joint venture with Taittinger's UK agency, Hatch Mansfield, was presided over by Pierre-Emmanuel Taittinger, President of Champagne Taittinger, Patrick McGrath MW, MD of Hatch Mansfield and Stephen Skelton MW, one of the UK's leading viticulture consultants, who has worked closely with the Domaine Evremond team.

Domaine Evremond takes its name from Charles de Saint-Evremond (1614-1703), Field Marshal of Louis XIV's armies and the first true ambassador for Champagne who fueled its popularity in England at the court of Charles II. A passionate historian, Pierre-Emmanuel Taittinger named this new venture, Domaine Evremond, in his memory. He explains further why the company has chosen to embark on this exciting new venture. "Our family has always had a great affection for the UK and for Kent - my father Jean Taittinger twinned Canterbury with Reims when he was Mayor of the latter in the 1950s. We believe the combination of chalk soils, climate and topography of our site in Kent is ideal for producing quality sparkling wine. These attributes are perfect for grape growing and are very similar to the terroir in Champagne, so for us it was a natural step to do this." 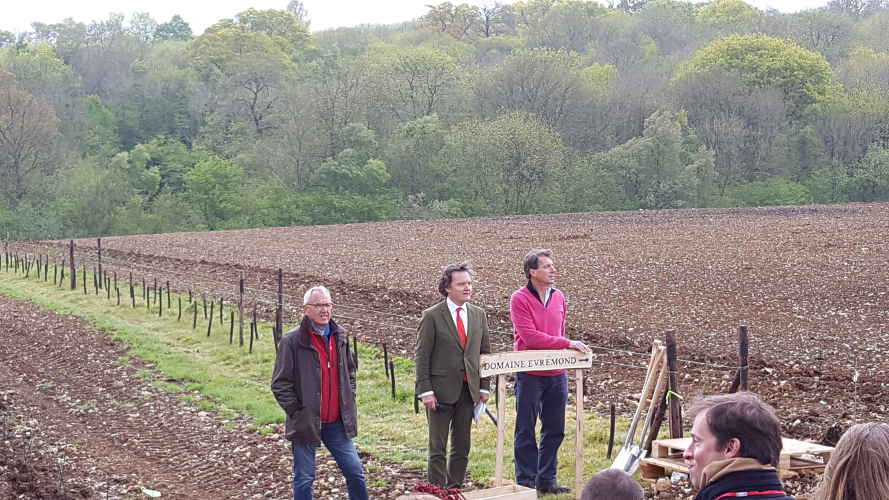 The day's main events began with an introduction given by Patrick McGrath MW who spoke further about the importance of a major Champagne House's involvement on English soil. "The endorsement of Champagne Taittinger shows where English sparkling wine has come over the last 15-20 years, so today this is what we are celebrating!" He then talked about how the idea was conceived. "It all began with a conversation in Reims about the potential of English sparkling wine. Pierre-Emmanuel explained how he wanted to follow the example of Domaine Carneros, Taittinger's Napa Valley estate founded 30 years ago, which has built a reputation for world-class sparkling wine and Pinot Noir and he believed that he could do something similar here." 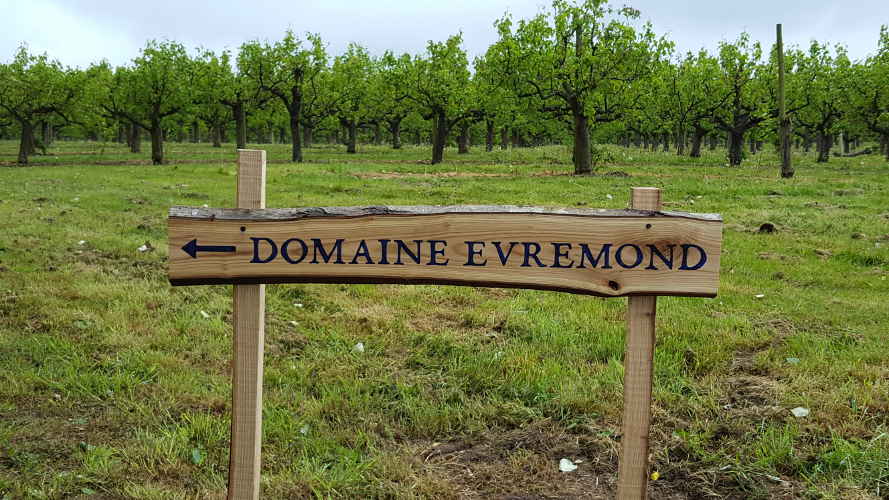 Pierre-Emmanuel then spoke of his vision. "We are going to do something special in this beautiful part of the world. The Taittinger name is a signature, like a painter's and Evremond is here to develop that signature of excellence." He also emphasised how wine has nothing to do with nationalism. "It's about abolishing frontiers", he explained, a theme he continued when I spoke to him after the digging. "I prefer to speak about good names rather than countries in terms of wine. All countries make good and bad wines, but my only need is the pursuit of excellence!" I also asked him about the reaction in France to what he is doing. "The fact that the Taittinger family is involved has been well-received in France, because we are an established name with a good reputation", he told me. "We are very patriotic in France, so if Taittinger is now in England, then people see that in a positive light!"

The event also offered an opportunity to showcase many Kent sparkling wine producers, including the first vintage of Simpsons Wine Estate's inaugural sparkling wine, Roman Road Chardonnay 2016. At 11.5% ABV, it's a light, mineral crisp, clean and linear expression of the grape with notes of lemon, lime and green apple plus touches of spice and nuts. This will be a limited edition release of less than 700 bottles, retailing at the cellar door for £22.99. Other exhibitors included Biddenden, Chapel Down, Gusbourne, Herbert Hall, Hush Heath, Squerryes, The Mount Vineyard, Westwell Wines and Woodchurch.

Additionally, there was an opportunity to try three Domaine Carneros wines, including the rich and complex Le Rêve Blanc De Blancs 2007. 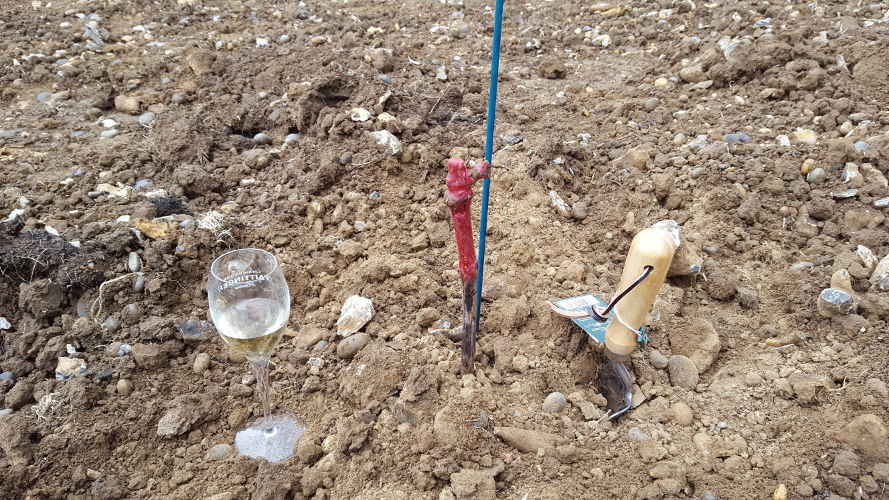 Planting my Chardonnay vine (no. 30 in the first row) with a little help courtesy of a glass of Taittinger Champagne!

The first bottles of Domaine Evremond should be released for drinking in 2023, after three years of ageing in bottle, while ultimately the aim is to produce 300,000 bottles per year. Although it is too early to determine how many cuvées will be made, Chardonnay and Pinot Noir are likely to dominate, with a high percentage of the former reflecting the Taittinger house style and only a small proportion of Pinot Meunier is expected to be used. If Champagne Taittinger's track record is anything to go by, along with the ever-improving quality of Kent sparkling wine, then six years from now will mark a momentous moment in wine history. As Pierre-Emmanuel Taittinger said "We are going to be successful" and who would argue with him?