Sweet is cool – even in unlikely places!

A look at wine made in the East Midlands of England 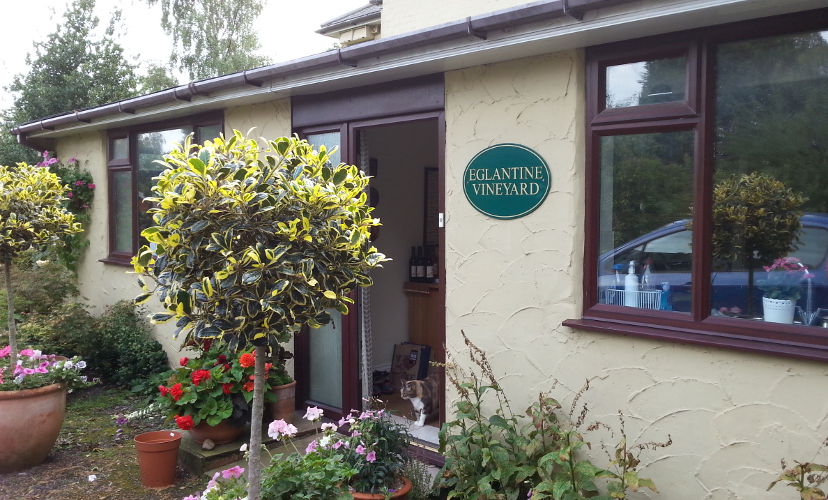 It doesn’t seem so long ago that many people wouldn't throw a second glance at a bottle of sweeter wine, associating it with poor quality efforts popular in the 1970s. Mais plus ça change! Sweet wines are making a comeback and it's younger drinkers who are embracing these more and more. Sweeter Rieslings and low-alcohol fizzy Moscatos are pushing the trend button and dry or even bone dry are no longer 'de rigueur'.

One style that is becoming much better known among discerning drinkers is 'Eiswein' or 'ice wine'. Traditionally made in Germany and Austria, it has become particularly successful in Canada with Riesling, Vidal, Cabernet Franc and Gewurztraminer being the grapes most typically used. It is a rich style of dessert wine made from grapes that have been left on the vine in winter to freeze naturally at a temperature of no warmer than -7°C (Germany) or -8°C (Canada). Water forms ice crystals, which are pressed out during the vinification process. The effect of this is to concentrate the remaining grape must, intensifying the flavour of the resultant wine, which is high in sugar and acid and relatively low in alcohol (7-12% ABV). Unlike many of the world's most famous dessert wines, the grapes used to make ice wine have NOT been affected by botrytis. 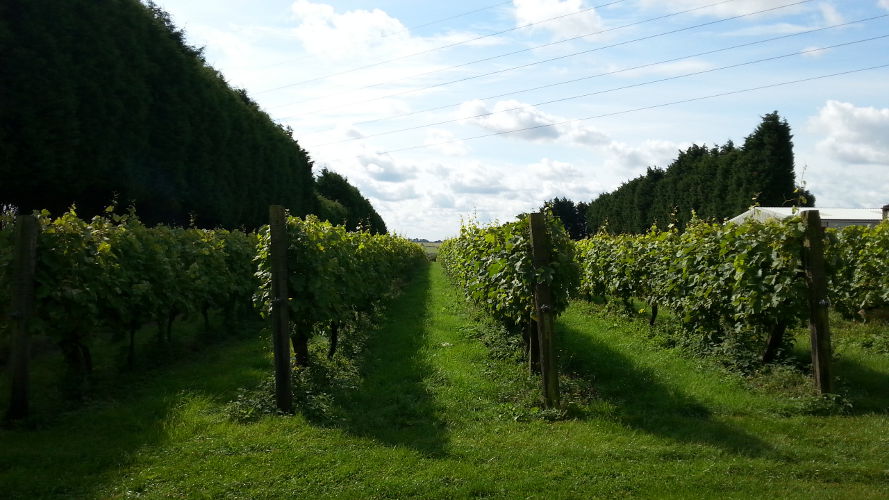 Tony and Veronica Skuriat's Eglantine Vineyard is named after the Eglantine or Sweet Briar rose - the smallest of the wild English roses growing along hedgerows. This four-acre site in South Nottinghamshire, England, comprises 4000 vines, arranged in 40 rows, in what is effectively the couple's back garden. They began growing vines in 1979, releasing their first commercial vintage in 1984. 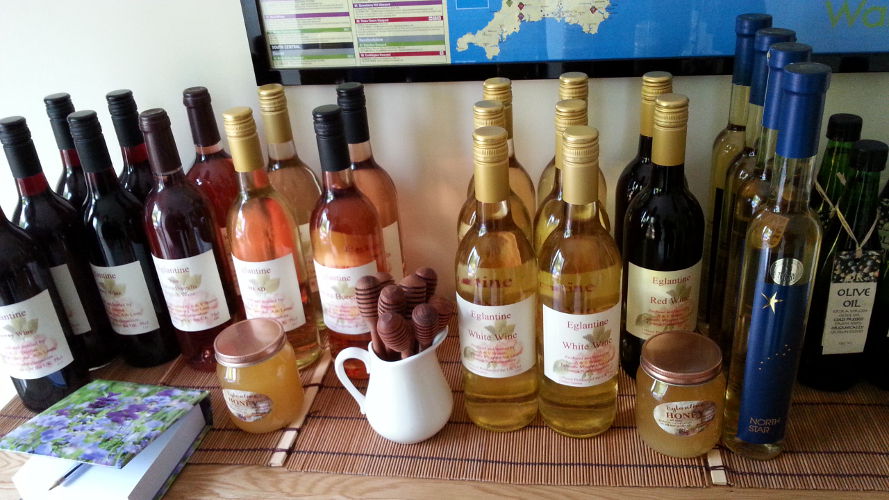 With over 200 varieties, grown in soil characterised by heavy clay over glacial drift, they make white, red and rosé wine from just six. These are Madeleine Angevine (a hardy, early-ripening grape which can ripen well in more northerly regions), Pinot Noir, Regent, Chardonnay, Seyval Blanc (a popular hybrid variety in the UK) and Pinot Meunier. 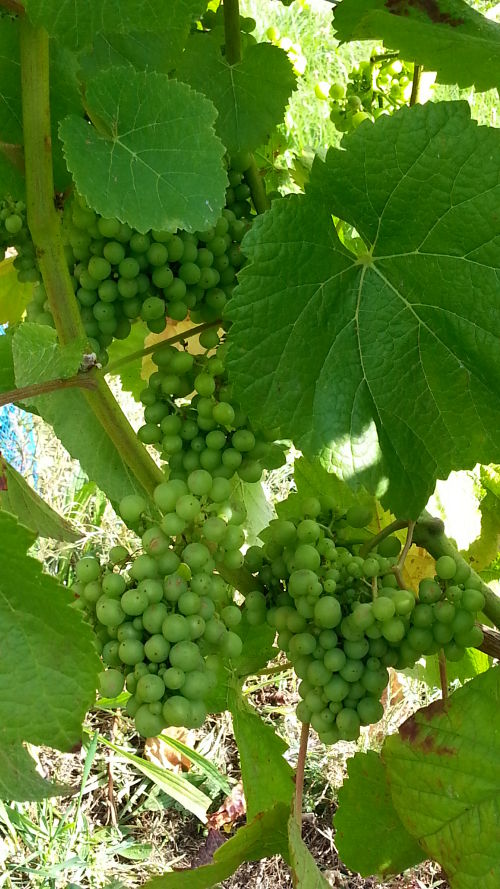 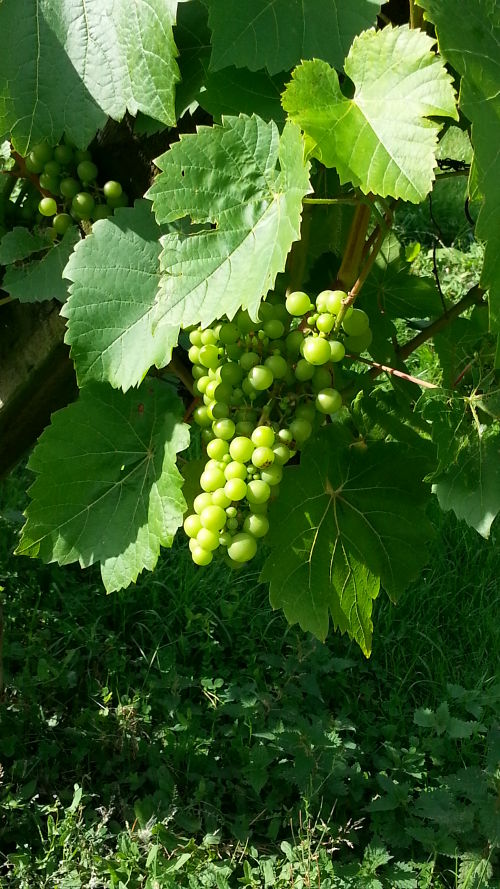 Additionally, the couple make a rich, sweet cherry wine and they also have an apiary, from which they make a traditional mead out of the superb honey they produce there. Vinification takes place in their on-site purpose-built winery, where they use a small Bucher Vaslin press. 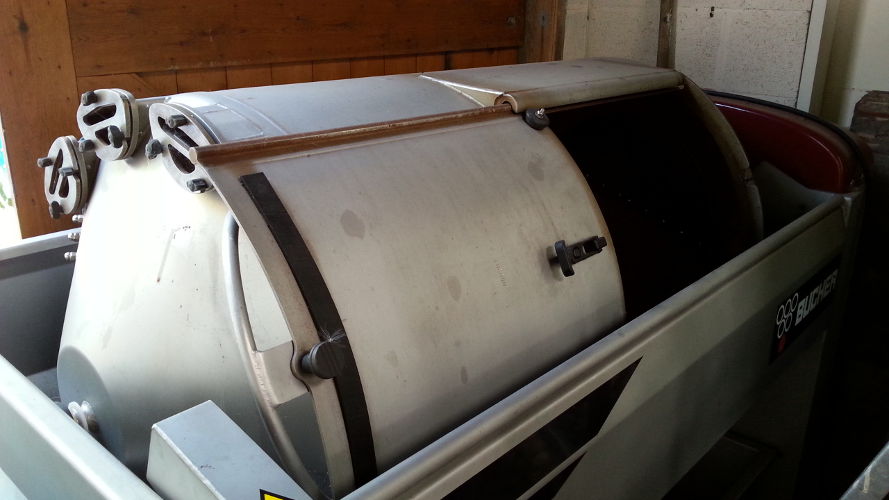 Eglantine Vineyard is particularly renowned for 'North Star', an iconic, multi-award winning dessert wine, or as Tony, a former chemistry teacher describes, a "technical ice wine", which he first produced in 2001, the vintage released a year later to medal-winning acclaim. It cannot be labelled an "ice wine", because for that designation, the grapes, juice or wine must not be artificially refrigerated at any time. 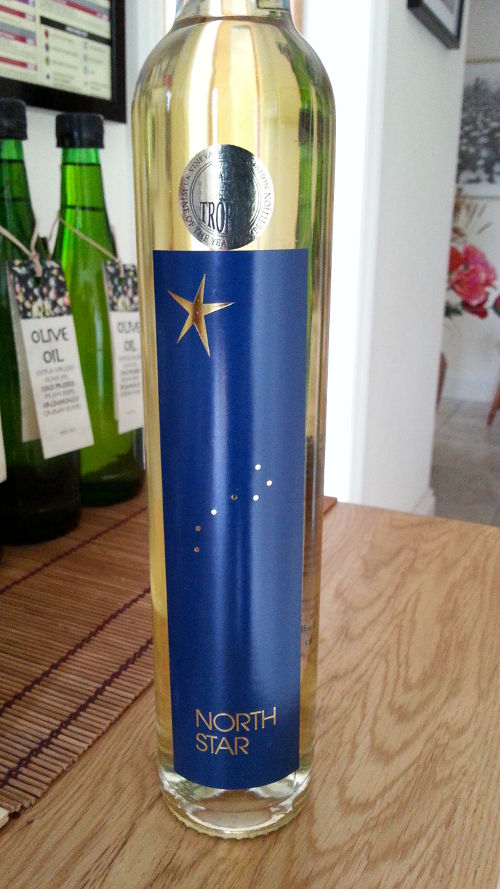 However, given that England does not normally become cold enough to freeze grapes on the vine, Tony decided to make his version by picking Madeleine Angevine grapes at optimal ripeness levels (which last year was at the end of October), before placing them in a freezer. This method, he further explains, also minimises the risks of the grapes bein g attacked by birds or rot later in the year. With the water content frozen, the grapes are then pressed out, releasing just a small quantity of highly concentrated, sweet juice and the frozen water remains in the press. A slow fermentation then begins, which can take up to three years from vintage. It hasn't always been a smooth ride, as for many years, the grapes would not ripen sufficiently, so North Star could not be made then. However, patience, determination and belief held firm and an ever-growing array of national and international awards is the end result. 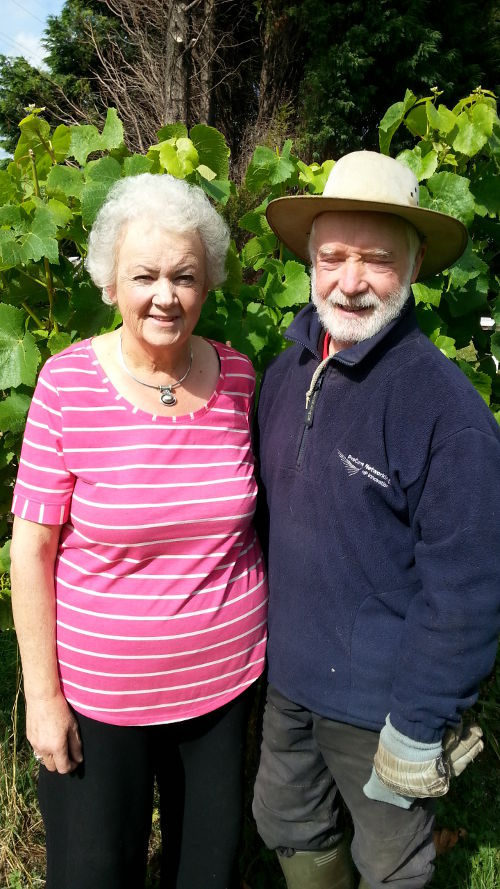 Given English vineyards' success at producing quality sparkling wine, it comes as no surprise that Eglantine is no exception. The Skuriats make their sparkling wine from Madeline Angevine and Seyval Blanc, using a 320-bottle capacity gyropalette, built by Tony and whose ingenious design of a wooden crate on a hexagonal base, has won an innovation award. 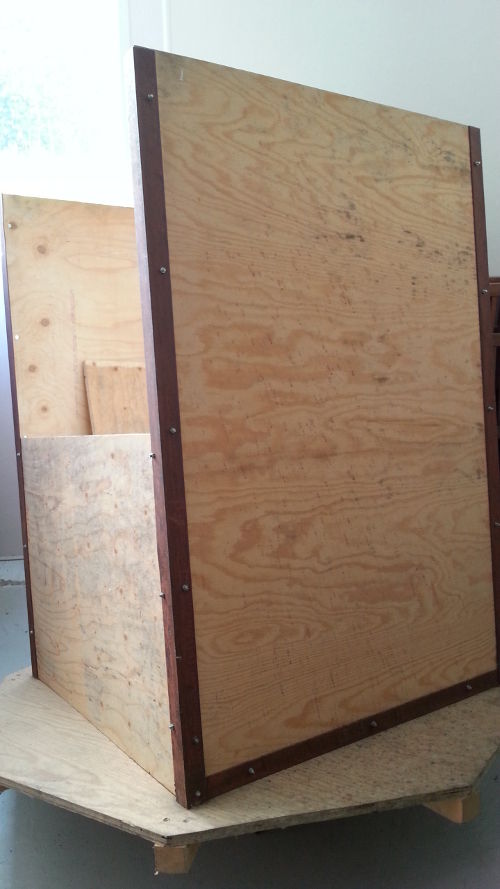 Remuage is performed twice daily, equivalent to a quarter turn, normally taking between two and three weeks to complete. The couple have been making sparkling wine for the last 15 years, although dégorgement previously took place at another vineyard. Vintages are not released every year – the previous release in 2011 used grapes from 2008/2009 – and the next vintage will be available in June 2015. There is always something of a battle between small-scale production and demand with bottles of their previous vintage running out about a year ago. Additionally, from this year's harvest, they will make a separate sparkling wine from a Champagne blend of Pinot Noir, Chardonnay and Pinot Meunier, to be released in 2016. 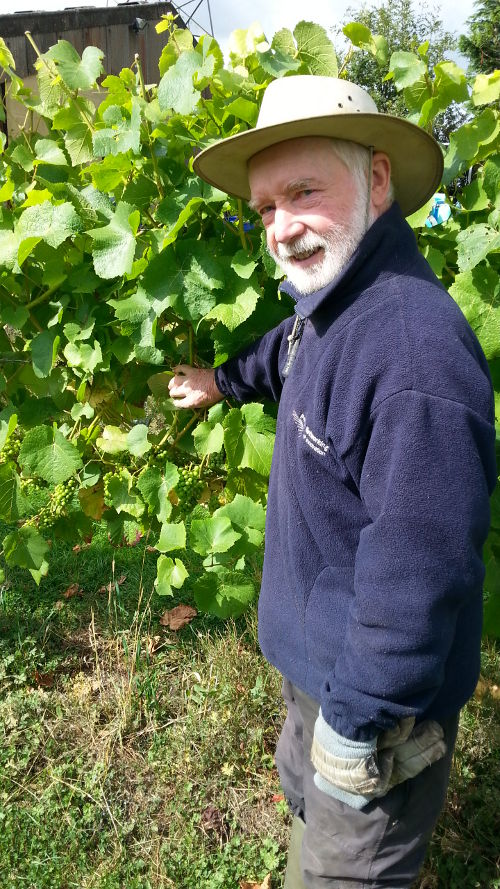 Tony Skuriat standing in front of some Pinot Noir vines

Tony's winemaking philosophy includes letting fermentation run its natural life, without heating or chilling and allowing the wine to settle out naturally, instead of having a two-stage filtration, for example. These methods, he argues, result in better flavoured wine. 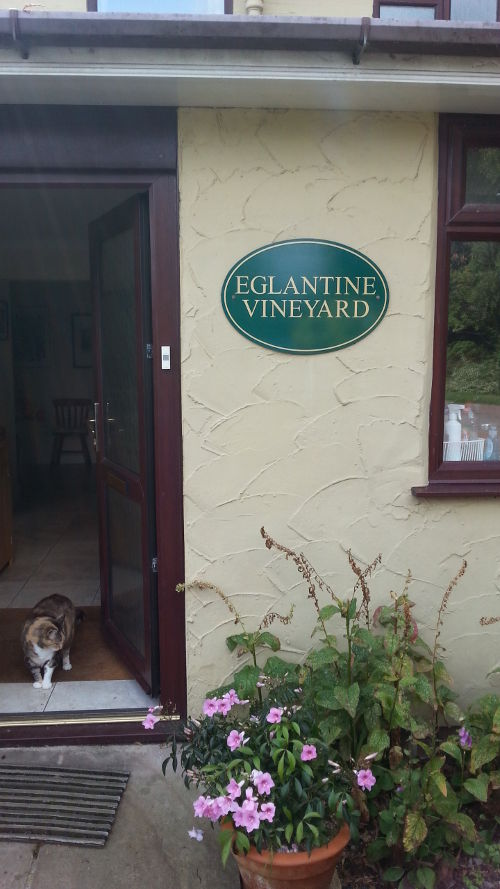 The Skuriats make a maximum of 6000 bottles a year of their own wine, including a yearly average of around 1000 half-bottles of North Star. They sell direct to customers from the vineyard, but also through local shops and, in North Star's case, at London's English wine specialists Wine Pantry. Additionally, they make wine for two other local vineyards, the smaller one only being a single acre in size.

So, when is an "ice wine" not an ice wine? The answer – when it's Tony and Veronica Skuriat's deliciously complex, intense, lush, exotic, honeyed, peach, apricot and marmalade-like "technical ice wine", North Star!

Now that I've finished my main course, washed down with a bottle of Eglantine's 'Aurora Borealis' rosé, I think it's time for dessert and I have just the wine to go with that! Bring it on…