Clos De L'Obac: a vinous jewel in the hills of Priorat

All images by Robin Goldsmith, unless otherwise stated. 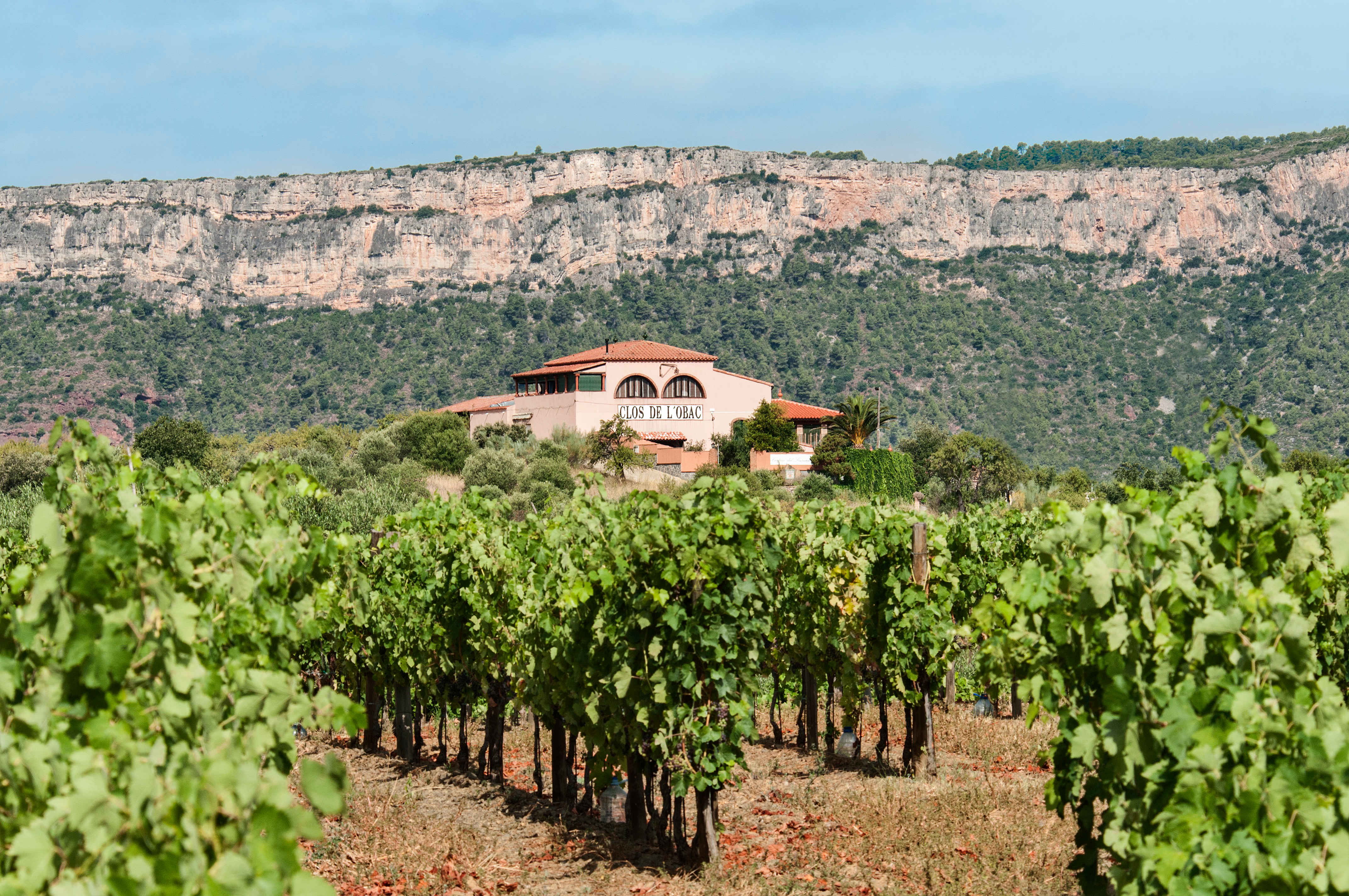 Priorat is the local Catalan name for Priorato in Castilian, named after the 12th Century Carthusian Priory of the Stairway of God (Priorato de Scala Dei). It's a small wine region located in the province of Tarragona, approximately 90 miles south west of Barcelona, covering around 4,000 acres of harsh terrain. Winemaking began there with the monks in the middle ages, but after falling into decline when phylloxera wiped out the vines, resumed in the early 1950s. However, it was not until 1979 when a group called the 'Priorat Pioneers' reinvigorated the area, recognising the potential for top quality wines. Success was achieved in the 1990s after the group moved to the tiny hilltop village of Gratallops (which means 'howling of the wolves') to make wine bottled under five different labels prefixed Clos, distinguishing them from the more rustic styles prevalent in the area at the time. Since then, Priorat has become regarded as among the great wine regions of the world. Indeed, a leading light of the original Pioneers, Alvaro Palacios produces one of Spain's most renowned wines, L'Ermita. Furthermore, alongside Rioja, Priorat is the only other region in Spain to qualify as DOCa (DOQ in Catalan), the highest wine classification level in the country. 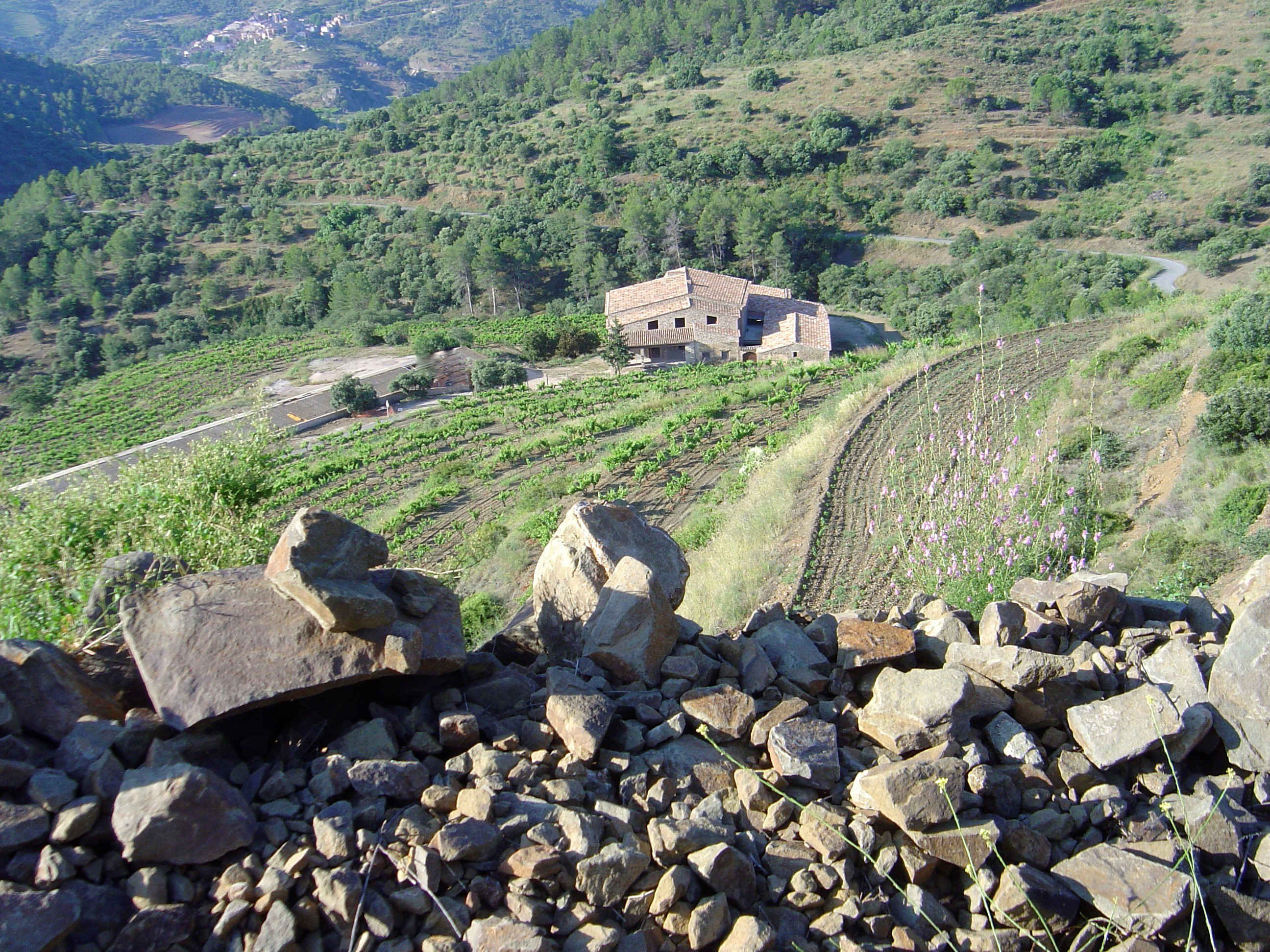 With vineyards ranging in altitude from 100m to 700m above sea level, terroir is key to the region's success and uniqueness, specifically the llicorella soils, a combination of slate and quartz deemed to give the wines their pronounced minerality and intensity of flavour. On higher grounds, red clay dominates producing more delicate wines. Vineyards are planted on steep terraces and in contrast to the cold, windy winters, benefit from up to 18 hours sunshine a day during the hot, dry summers, the sea breezes providing a crucial cooling effect.

The region specialises in red wines, based primarily on low-yielding old bush vine Garnacha and Cariñena (Samsó in Catalan). Additionally, some international varieties are planted, including Syrah, Cabernet Sauvignon and Merlot. A small amount of white wine is also produced (under 5% of total production) from Garnacha Blanca and Macabeo. 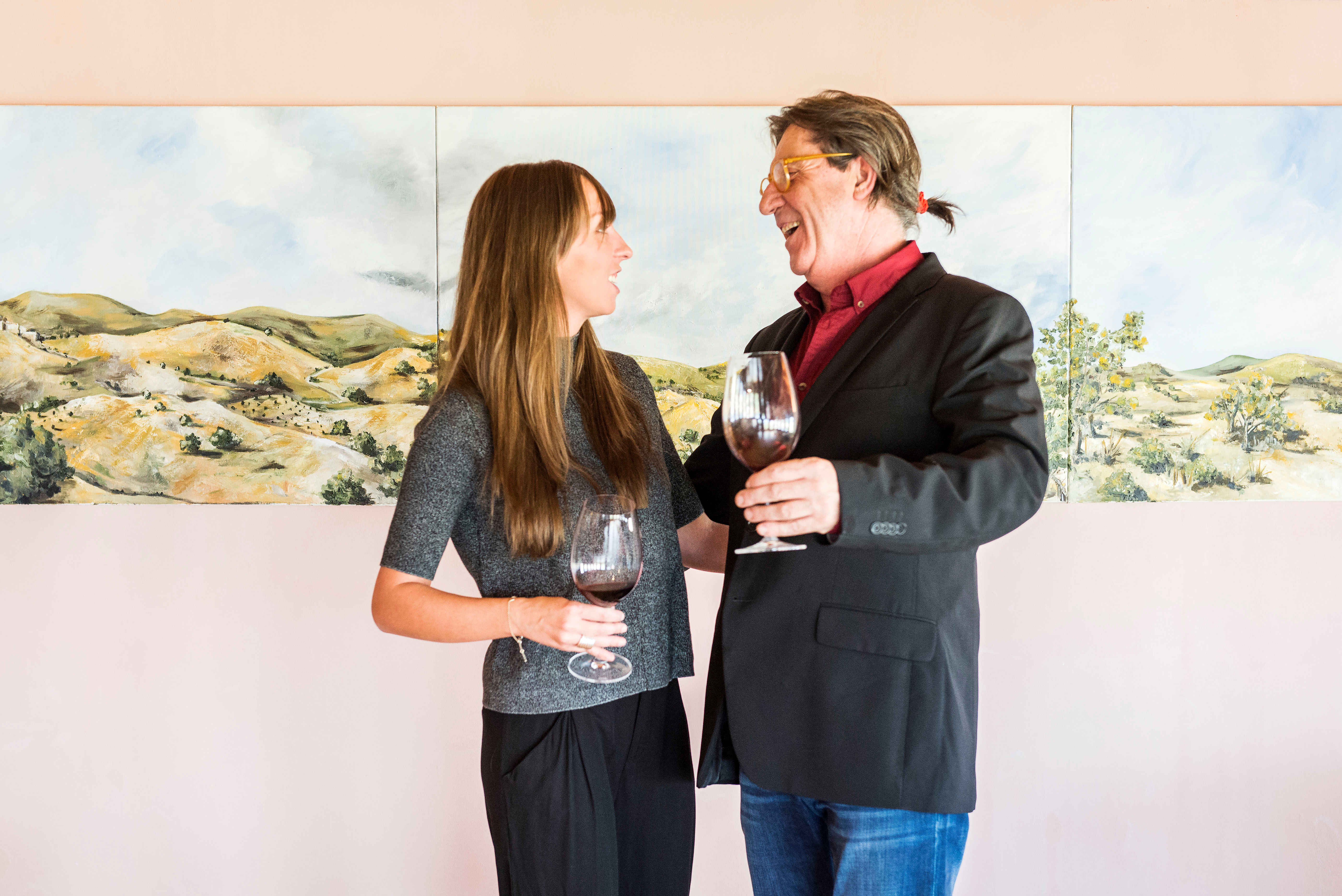 Clos de L'Obac (the official name of the winery is Costers del Siurana) was established in 1979 by former journalist Carles Pastrana and his oenologist wife Mariona Jarque and is one of the original five pioneering Priorat wineries. They began production in 1989, released their first vintage two years later and quickly attained global fame when the World Wine Guide declared their flagship wine, Clos de l'Obac, to be among the world's top 150. The export market is extremely important with 90% of the winery's production sold outside Spain, 50% to the USA and 40% to the rest of Europe. With a reputation for elegance, great balance and excellent ageing potential, these are wines to be savoured, especially with food and so I was delighted to receive an invitation last month from Waud Wines for a tasting and lunch with Carles and his daughter Mariona at the City of London Club. 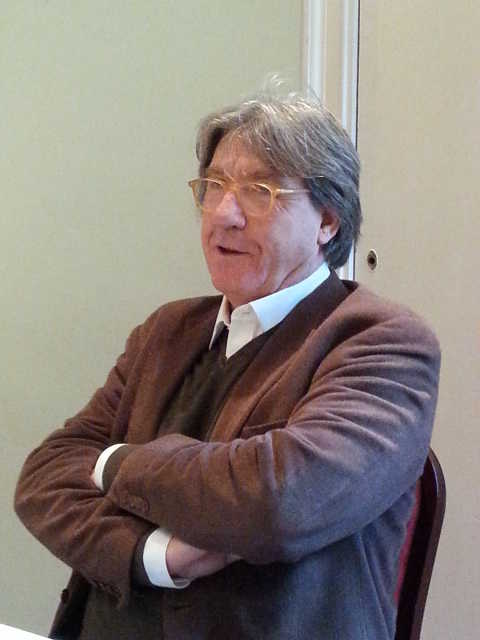 Carles began by describing Priorat's distinctive terroir before explaining his own unique approach to winemaking. His "new way of producing wine" uses the identical blend of grape varieties in the same percentages from the same vineyards each year, picked once sufficiently ripe and then fermented together, creating wines with "the same personality but different character". Therefore, vintage differences in any wine are based on the weather, rather than changes in the blend. Indeed, since 2002, Carles has noted an effect of climate change with decreased rainfall in particular, producing wines with sweeter tannins and a smoother mouthfeel. The resultant style is more "New World" and easier to drink, while remaining characteristically elegant. 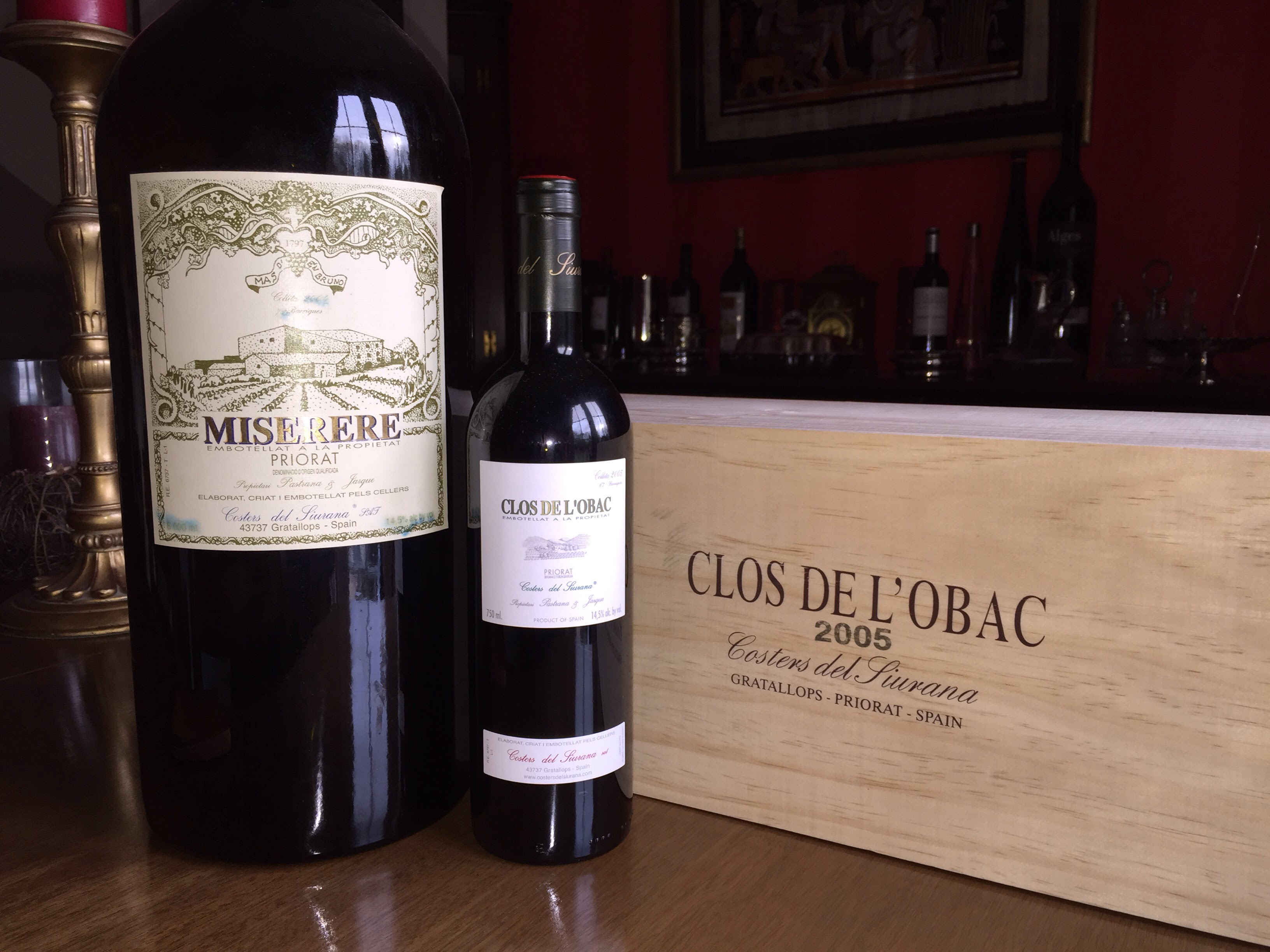 To retain complexity, structure, finesse and what Carles calls "the complete personality of the wines", racking is done manually by candlelight, ageing is always in 100% new French oak lasting between 12 and 18 months and wines are bottled without filtration. The winery owns around 130 hectares of land, 35 hectares of which are planted with vines, producing up to 70 kilos of grapes a year and between 60,000 and 70,000 bottles. However, because they keep to the same blends of grape varieties every vintage, production figures can vary hugely if there is a lower yield of one variety during any year, in order to preserve the same percentages.

The food and wine pairings 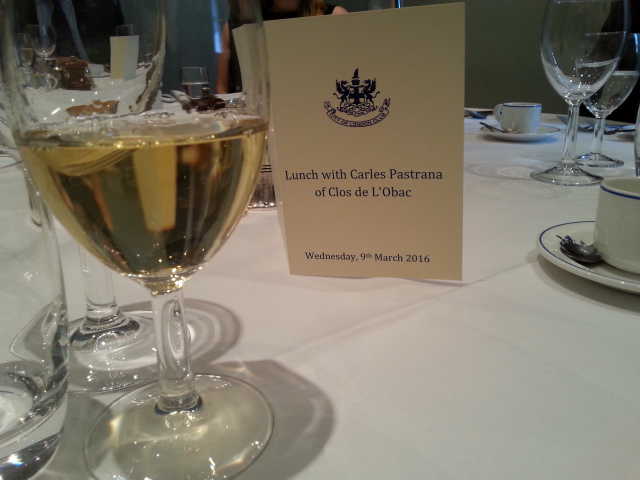 Made from four classic Catalonian white grapes, this is a wine that would appeal to lovers of fine white Burgundy. It is beautifully structured and complex with notes of white peach, honey, nuts, minerality and an almost dry sherry-like quality. Carles stressed that despite the importance of wood ageing, his wines do not taste of oak and this was undeniably true with this wine. There are subtle hints of vanilla and mixed spice, but none of that overt oakiness found in many other styles. What a great start - an unusual and utterly delicious wine to grace any meal and a decent pairing for the rabbit. It would also work extremely well with smoked fish. 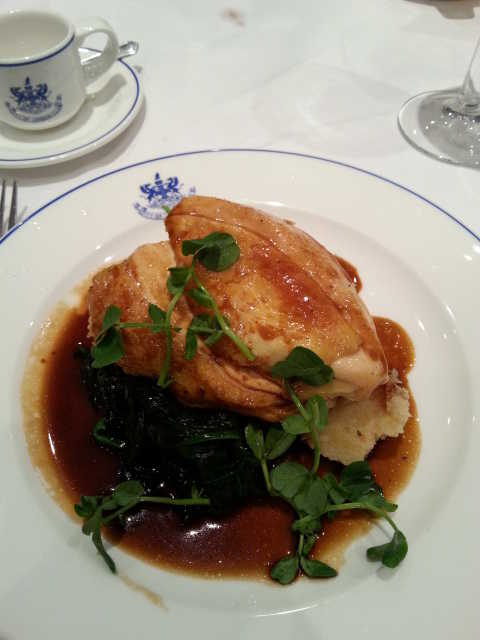 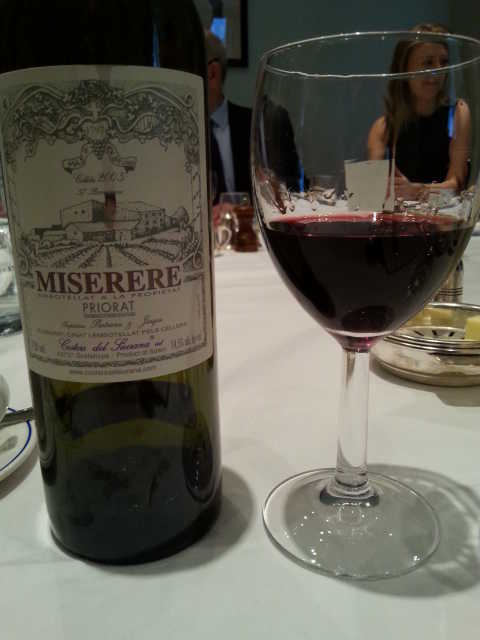 This elegant, fine, dry red wine, named after the Latin word for 'mercy' in honour of the hard-working medieval monks, has been aged for 12 months. It's remained remarkably fresh, floral and fruity with notes of red and dark berries, hints of cassis, liquorice, chocolate, herbs and spice plus delicate, velvety smooth tannins. Carles advised that this wine is a particularly good pairing for lobster or strong fish dishes, including monkfish stew. 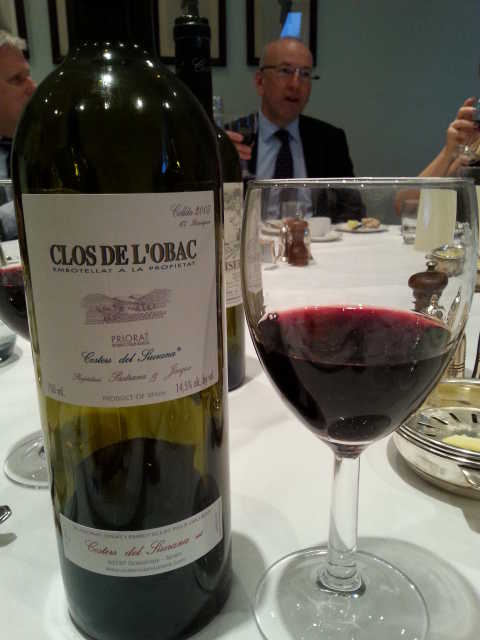 With similar grapes to Miserere (Syrah replacing the Tempranillo) and aged for 14 months, this is a very different and more expressive wine. The nose is floral, but spicier with a touch of herbs and smoke plus fruity notes of cherries, blueberries and blackcurrants. Red and black fruit notes continue on the beautifully rounded palate, which has soft tannins and excellent length. There is a slight increase in acidity here which helps to retain freshness and this is perfectly balanced by a gentle hint of smooth chocolate on the mid-palate. Carles spoke about how this wine evolves and improves after the bottle has been opened, whether after three hours or even five days, the initial floral and fresh qualities giving way to deeper flavours. It would go very well with game or red meat, but was still delicious with the chicken dish we all enjoyed. 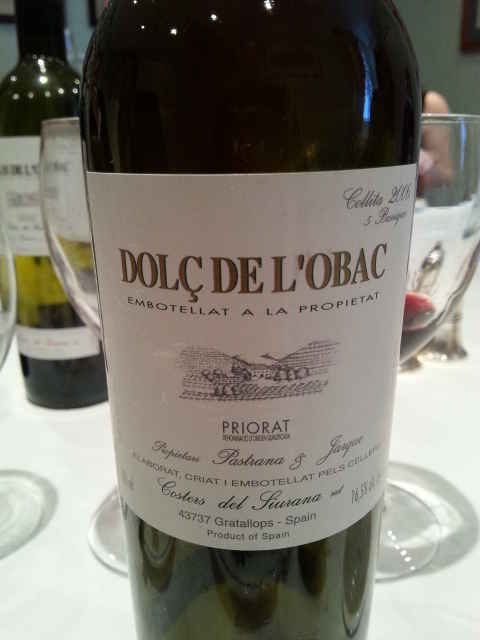 Overripe grapes are used to make this fabulous sweet wine oozing with flavours of dates, cherries, blackberries and milk chocolate, enhanced by soft sweet tannins and a perfectly balanced and barely noticeable alcohol level of 16.5% ABV. A slow fermentation lasting between 18 and 25 days stops when the yeast dies through temperature control and about 50g of residual sugar is preserved naturally. The wine is then aged for 12 to 15 months in new French oak. It perfectly complemented the chocolate-based dessert and would also pair well with blue cheese and foie gras. 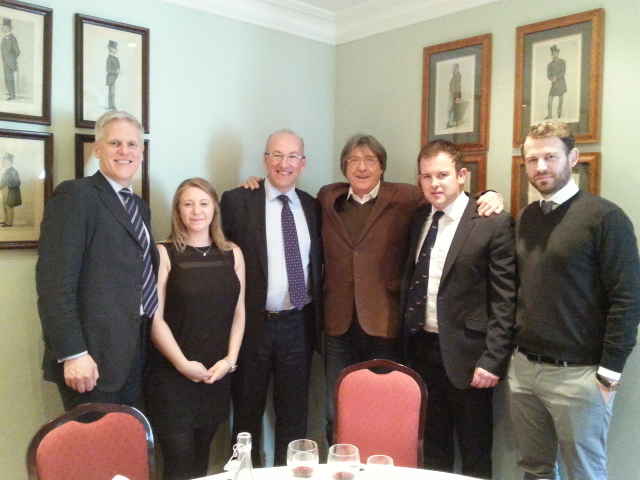 Participants at the lunch and tasting

During the lunch, it became increasingly evident how, in Carles' words, his wines are "elegant and never aggressive". They are full of finesse, complexity, roundness and ageing potential, perfectly illustrating how modern Priorat has gained such a high reputation among wine lovers. If you've never tried wines from this region before, the range from Clos de l'Obac will be a classy way to start and cannot be recommended highly enough. ¡Salut!

Waud Wines specialise in Mediterranean wine, but among their 100-strong portfolio, include some wines from Portugal and the southern hemisphere too. They offer a private members club, as well as commercial wine portfolio services, events, tours and fine wine investment options. Their stylish wines are not available in multiple retailers and they are one of only two Clos de L'Obac importers in the UK. 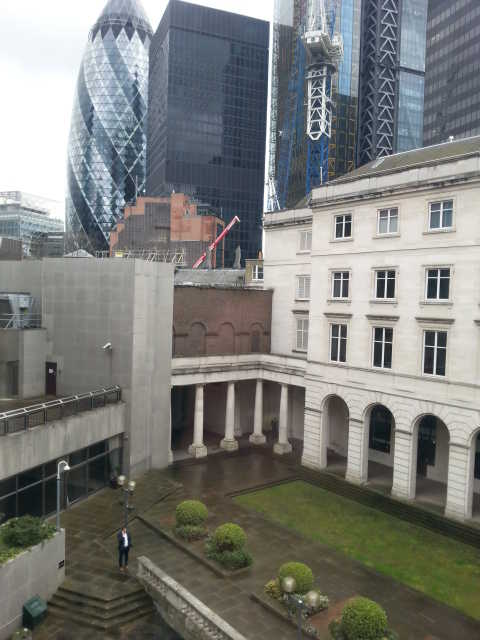 View from the City of London Club

City of London Club, a members-only establishment founded in 1832, is the oldest club in the City of London. Original members included the Duke of Wellington and Sir Robert Peel.