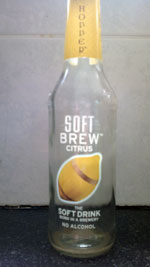 OK. As the sun allegedly arrives with the jet stream moving away, it’s time for a chilled summer drink that’s refreshing and not sickly sweet. Rather than something alcoholic, I thought I’d feature my favourite alternative to pure fruit juices.

WP Hopper Soft Brew is made from English hops, malt and barley, flavoured with fruit juice. The initial brewing process results in a beer-like flavour, but without the alcohol as yeast is not added for fermentation. Available in two other flavours as well - apple and blackcurrant - the shandy-like citrus version also contains some apple juice.

The Soft Brew range tastes so much better than most low-alcohol lagers and you still get that refreshing and thirst-quenching tang of beer bitterness. Enjoy!