Raise a glass of Champagne to the Royal British Legion! 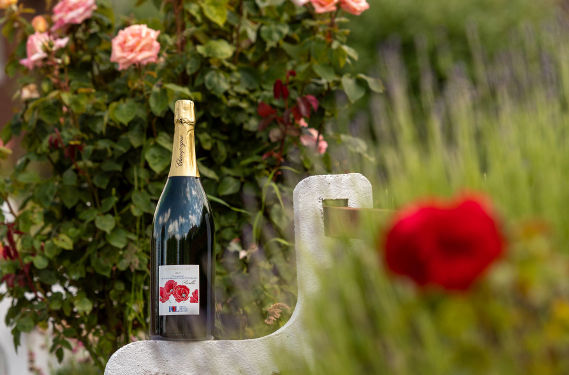 Remembrance Sunday falls on 14th November this year. It's the nation's opportunity to remember the vital role the Armed Forces and others have played in protecting us during times of war and conflict. At the heart of this annual commemoration is the Royal British Legion (RBL) which supports remembrance events across the UK.

Founded in May 1921 as a campaigning organization, The Royal British Legion has provided much-needed welfare and comradeship to millions of people who served during both World Wars and beyond. A hundred years on, they continue to respond to the changing needs of the Armed Forces community, providing small interventions to life-changing and sometimes lifesaving support. The need for their vital charitable work has been highlighted even further as a result of Covid-19. During the pandemic, calls to access food parcels have increased dramatically and the dangers of loneliness, isolation, homelessness and financial crisis have become ever more apparent.

This year, The Royal British Legion is celebrating an incredible 100 years of supporting the Armed Forces community. In partnership with Eminent Wines, they have created three Champagnes to mark this milestone. Monies raised from sales of these Champagnes will go towards continuing support of people experiencing new hardships as a result of Covid-19 and other devastating changing personal circumstances.

The three Champagnes are a Brut, Rosé and Blanc de Blancs:-

A tribute to The Royal British Legion

Jerome Jacober, Founder and CEO of Eminent Wines, comments on the new project. "As a fitting tribute to their work and dedication, it has been Eminent Wines' absolute pleasure to collaborate with the Royal British Legion to create three very special Champagnes to toast this centenary."

"In choosing Champagne", Jerome continues, "we looked to the history of the Royal British Legion and it is very much to pay tribute to the historic relationship between France and the United Kingdom. One of the founders and later President of The Royal British Legion, Field Marshal Douglas Haig, spent the most important part of his career as Commander-in-Chief of the British forces in France. His unwavering support for France included forcing the Germans into a war of attrition that made German attacks on French territory much more difficult. He also took unimaginable risks during the Battle of Amiens by combining infantry and air force on a single flank of attack, which resulted in saving his French allies. At the end of the war, he remained in France, notably at the beginning of the reconstruction of Dunkirk, where he supervised the 'demining' operations conducted in the north of the country by several hundred or even thousands of British deminers. In recognition of his dedication, Field Marshal Douglas Haig was awarded the French Legion of Honour on 24th February 1916. He also served as President of the Royal British Legion from its inception until his death in 1928. Like Sir Winston Churchill, Field Marshal Douglas Haig was a great lover of Champagne."

The grapes for the RBL 100 Celebration range are selected from vines grown on the southern Grand Cru and Premier Cru hillsides of Épernay. The art of blending required carefully selecting grapes from the different terroirs and including wine from previous vintages, to create a range that perfectly expresses the style and identity of Champagne Jacober.

Jerome was part of the selection and blending process and he explains further. "To ensure the range truly reflects this honour of the RBL 100 celebration, the Champagnes rested in authentic 18th century cellars for 24 months to allow for 'quiet' fermentation, resulting in fine, delicate, celebratory bubbles!"

Nose: notes of yeasty bread, pastry, butterscotch, apple and peach with a hint of hazelnuts.

Palate: similar to the nose with a fruity brioche character plus a hint of citrus and a touch of butterscotch and nuts, leading to a long, delicately savoury finish.

Food match: great on its own, with oysters or fish and chips and many vegan/vegetarian dishes, including vegetable tempura and sushi.

The three bespoke cuvées of Champagne Jacober are available to purchase via Eminent Wines' website.