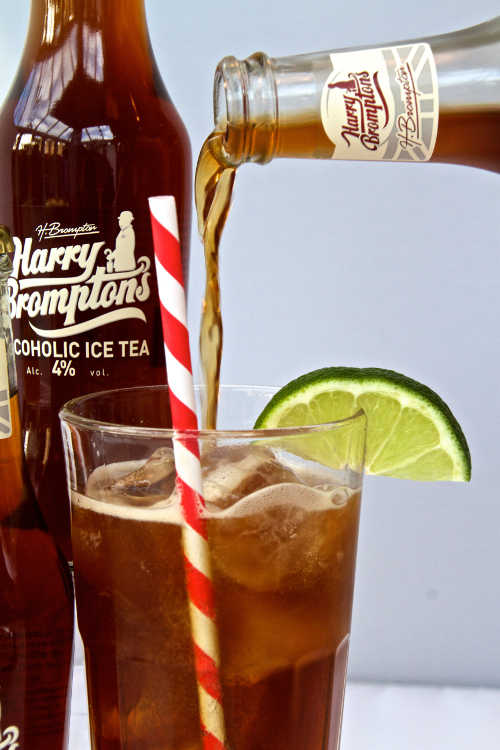 All images provided by Ian O'Donohue, unless specified otherwise

Sometimes a new product comes along and you just know that it's good – really good; something different and original, yet based on a traditional idea. What could be a more refreshing soft drink for warm weather than a glass of ice tea? Yet if you want the same energising and thirst-quenching effects but crave a stimulating alcoholic boost, is there an alternative? Well there is now!

Harry Brompton's Alcoholic Ice Tea is the answer. Based on high quality raw ingredients and coming in two flavours, the 4% alcohol level is low enough not to leave your eyes rolling on the floor when you have a glass or two.

This is a small brand with big ambitions and the figurehead of the operation is Harry Brompton himself, the globetrotting tea-lover determined to travel the world in order to seek out the best ingredients possible. I caught up with MD, Ian O’Donohue, after this year's Casual Dining Trade Show in London. 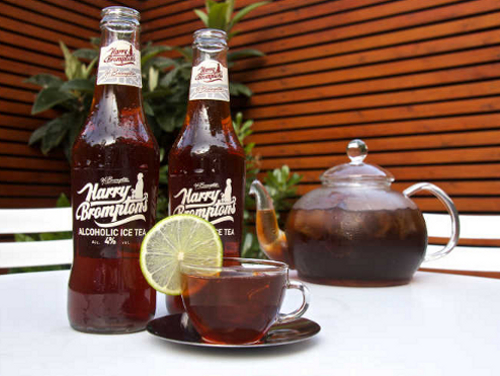 Robin Goldsmith: What is the story behind your company and what was the inspiration for you producing an alcoholic version of iced tea?

Ian O'Donohue: I used to live and work in the U.S. as an energy broker, spending time travelling between London, the States and the rest of the world. Everywhere I went, I noticed how popular ice tea was, but that it had not really caught on yet in the UK. Therefore, when I moved back to Britain, I thought there had to be an opportunity here – after all, we live for tea in England: it's a national institution and there had to be reason why we don't drink it here. Being a cocktail fanatic and lover of beer and wine, I always wanted to create an alcoholic product. So in 2009, I came up with this idea for an alcoholic ice tea, spending every weekend with family and friends (my wife is from Georgia in the US and is a fan of ice tea!) concocting different recipes on the kitchen table. We launched the company in November 2012 and created our first batch in May 2013. 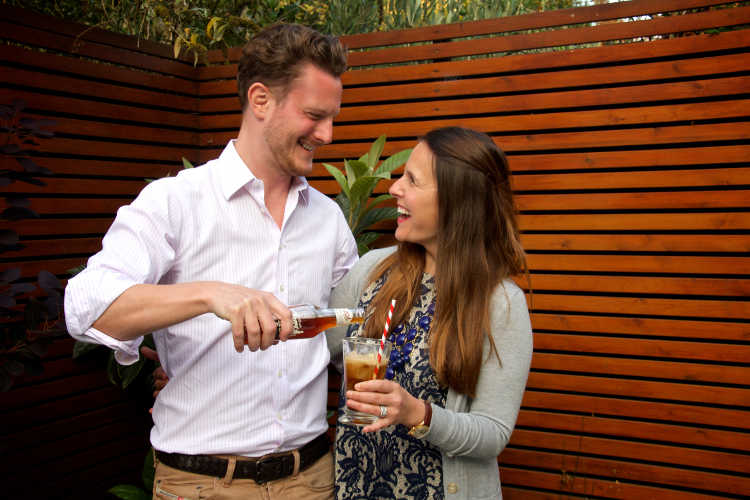 Ian O’Donohue and his wife

The British know their tea, preferring a big, rich, weighty style, predominantly based on Kenyan tea leaves. Yet most ice tea available here has little flavour, poor balance of acidity and is too sugary or drying. So my aim was to make a natural ice tea for the British palate, one that really hits the spot – something new and exciting! Also, since we drink and eat with our eyes first, everything had to look right. The key was to make something that looked as good as it tasted.

We sourced hundreds of different types of tea and spirits, experimenting with flavour combinations and arrived at three conclusions. Firstly, the tea must be Kenyan. Secondly, the classic balance of citrus works really well and thirdly, using vodka means that you don't taste the alcohol or detract from the flavour of the tea.

RG: How important is the quality of your raw materials, especially the ethically-sourced Kenyan black tea, in creating your product?

IO'D: It is fundamentally important for us to know how our raw materials are sourced, so the ethical side of our business is crucial, as well as the origin of our tea. Kenyan works best. We wanted the highest quality, not the cheapest, to deliver a fantastic quality product. Although the UK imports tea from all over the world, Kenyan tea leaves give the best flavour and traditional products such as English Breakfast Tea are predominantly based on this. Kenyan tea is not astringent, has more complex, deeper, richer tones like wine, including notes of raisins, prunes and good tannins. Also, it ages well so the flavours can develop further. We want to produce a tea drink, not a tea-flavoured beverage and so it's important for us to recreate this quality and familiarity to deliver the optimum weight of flavour in our product. Furthermore, like wine, our tea needs to sit for a few weeks to let it settle and rest.

RG: Given that a hot 'cup of tea' is a quintessential English tradition, how easy do you think it will be to sell your product at home?

IO'D: Although we have faced some initial reluctance, it does sell well, particularly among younger people and those who have travelled. However, what we find is that as soon as people try the product, they absolutely love it! We want them to talk about it and tell their friends - raising awareness is key. We're a small company, so people power can really benefit us. In fact, when we do tastings at independent stores, we can sell out our stock of 100 bottles in two hours and also often outsell craft beer at food and drink events! 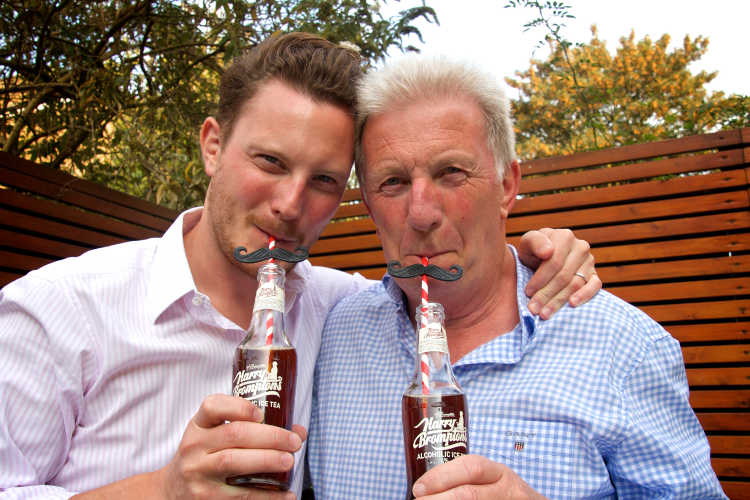 The company is run by father and son, Martin and Ian O’Donohue

RG: Where do you believe your main market lies?

IO'D: We sell particularly well in Scandinavia, Belgium and Holland, but also further afield in Canada, Taiwan and Singapore. We do intend to enter the US market, but need further funds and resources for this. We don’t want to restrict ourselves to the home market, as the world is a bigger place than the 60 million people living in the UK! People love and understand our product and we get contacted by people globally. It's British-made, but people can relate to the image equally at home and abroad. So we believe that Harry Brompton's will do very well all over the world and certainly intend to grow our export markets over the next few years.

RG: Where do you see your main competition – alcoholic ginger beer, for example?

IO'D: Although there is an overlapping demographic and our product often sits next to alcoholic ginger beer in fridges, we see it as a completely different offering. Ours is a vodka-based, high-end drink, one that is made to be savoured, with less sugar and a cleaner flavour. Also, people often want something a bit lighter than wine and Harry Brompton's London Ice Tea can fit the bill. Alcoholic versions of traditional soft drinks have become more popular, but we're not looking to follow a trend. We want to create the best alcoholic ice tea, because it's a good product, based on a familiar flavour that appeals to so many. 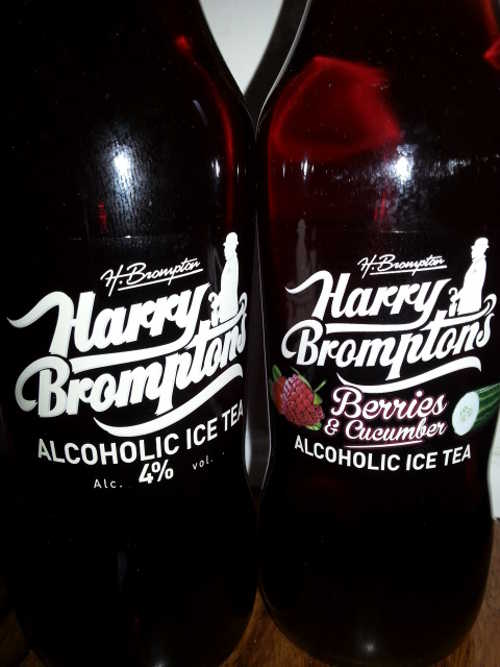 RG: You have two drinks – the original alcoholic ice tea flavoured with citrus and your new flavour 'Berries and Cucumber' containing raspberries, cranberries and cucumber. Did you always know that these were winning combinations and do you have any more in the pipeline?

IO'D: We tried hundreds of different combinations and felt that these would work. There are more in the pipeline, but we are still rolling out our 'Berries and Cucumber' so are concentrating for now on our two existing flavours.

RG: Your drinks seem particularly versatile – good for drinking on their own or for mixing into cocktails. Was this your intention from the start and do you think that they also make good partners for food, particularly in restaurants, as an alternative to wine or craft beer?

IO'D: Definitely! Harry Brompton's London Ice Tea is an excellent mixer for cocktails, particularly with gin. Also, it's a good partner for food and is currently being served in both Michelin-starred restaurants and BBQ joints. In fact, it's great with grilled food – crisp, refreshing and palate-cleansing - and stands up really well to spice. Also with relatively low alcohol at 4%, you can enjoy a longer drink too, that's not 14% ABV! Additionally, each bottle has only 151 calories which adds to the appeal and with alcohol levels in the UK coming down, people can focus on their enjoyment of the product rather than just getting drunk! 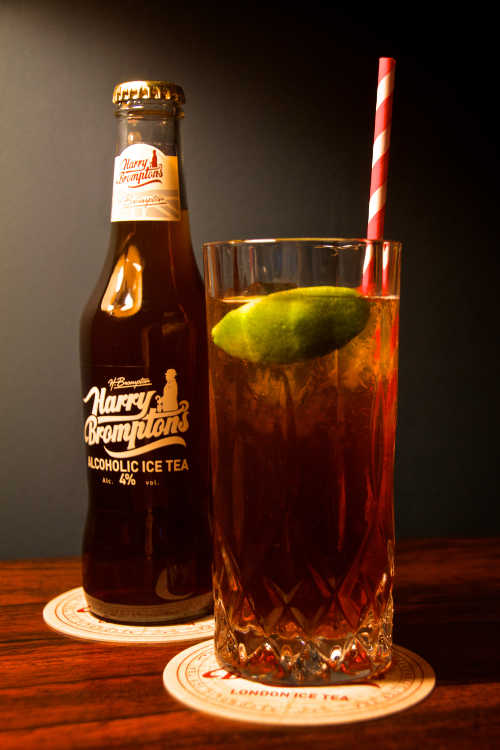 RG: What does the future hold and where would you like to see the company in five to ten years' time?

IO'D: We want Harry Brompton's London Ice Tea to be a household name globally with bottles in the hands of millions of people, starting off with the UK. We are ambitious and determined to see this become a reality!

Many thanks to Ian for sharing these insights into his exciting new company.