A delicious new organic snack made from roasted KAMUT® grain 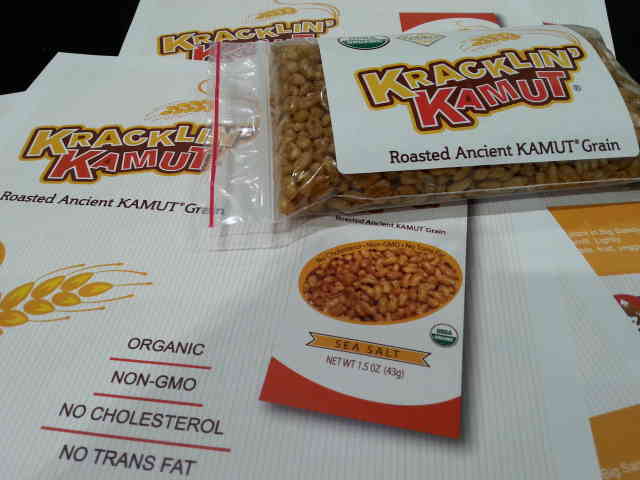 Among new products unveiled recently at the London trade fair, Natural & Organic Products Europe, and prior to its impending launch in the USA, was Kracklin Kamut™. The toasted Khorasan wheat snack was introduced at the Montana pavilion by Bob Quinn, his wife, Ann and their son, Adam of Kamut International Ltd..

Large kernels of Kamut® brand grain are boiled and then roasted with organic, natural, hi-oleic safflower oil from their farm, before being seasoned with sea salt from Utah. The oil leaves the processing facility to be re-used as fuel for their tractors. Rather than trying to compete directly with the confectionery market nationwide, the Quinns' home state of Montana will be their initial focus. Firstly, they plan to offer Kracklin Kamut™ to local youth groups at half price, in keeping with the family's ethical business policy. Their strategy then includes selling at ball games, high school athletic events and county fairs. Sold in 43-gram packets, 12 of which comprise a display box, the RRP in the USA is $1.25-$1.50 per packet and is their first retail food product to be sold through Montana Horizons Organic Snacks. Eventually, they intend to diversify flavours, pack sizes and look for new market opportunities. 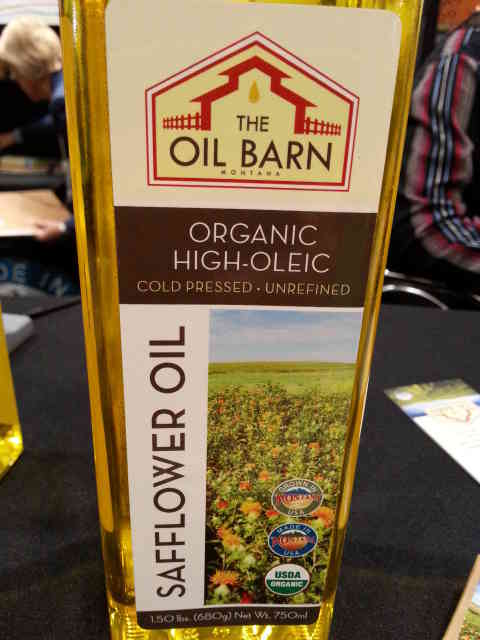 “Following failed attempts to get customers excited with a roasted wheat snack like corn nuts, we decided to make the product ourselves”, said Bob. "After 30 years developing the market for Kamut®, it is a nice challenge to also offer a final product to the end consumer. I decided to do this in my home town of Big Sandy, Montana, in order to bring something positive to a small town which continues to decline in population and services. I hope to bring employment opportunities and add to the population and income of the town."

Demand for 'gluten free' and 'wheat alternative' products has led to the growing popularity of ancient grains like Khorasan wheat (Triticum turgidum ssp.turanicum), an ancestor of the modern variety, which Bob Quinn and his father Mack rediscovered in the mid-1970s. Believed to originate in Egypt or Asia Minor, Kamut® currently grows mainly in Montana, USA and Alberta, Canada, although its biggest market is Italy. In 1990, Bob, a fourth-generation Montana farmer and scientist, registered the protected cultivated turanicum variety QK-77 as the trademark Kamut®. The name derives from an ancient Egyptian word for wheat and in Bob's words "guarantees purity, nutritional quality and that the grain is always organically grown and has never been modified or changed."

To secure traceability and prevent genetic engineering, Kamut® is only grown under contract and organic certification. The company encourages farmers to source the best seeds directly from them at no cost and recommends reseeding at harvest time. Kamut® has defined levels of protein (12-18%), resulting in a generally 30% higher protein content than modern wheat. It is 98% free of disease, un-hybridized and cannot be mixed with modern wheat pasta. The subsequent grain not only provides a uniquely rich, nutty flavour, but also has greater nutritional value than modern wheat, including high levels of selenium (400 to 1000 ppb), a mineral known for its antioxidant capacity. To meet these and other requirements when growing Khorasan wheat, Kamut International Ltd. offers free technical assistance to the farmers plus price guarantees to ensure profitability. They have also hired a full-time crop extension agent to help farmers successfully convert from chemical to organic systems. 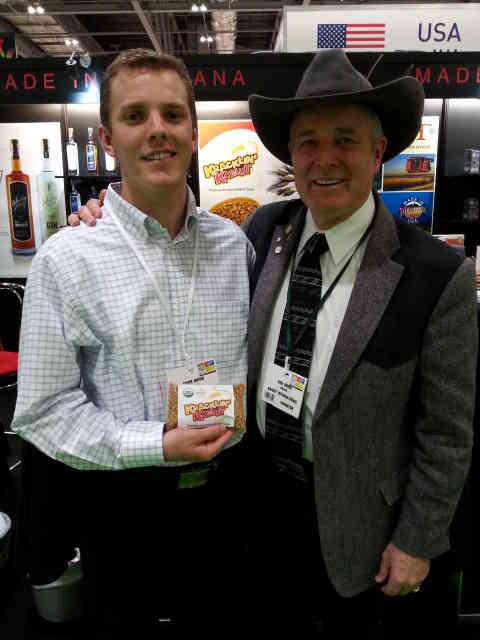 Research is fundamental to Bob Quinn's philosophy and the Quinn Organic Research Centre is testament to his faith in organic agriculture and to the health benefits of Kamut®. "We want to know why ancient wheat promotes health and modern wheat seems to diminish health for some people", explains Bob. Indeed, a 2013 study published in the European Journal of Clinical Nutrition showed a reduction in metabolic risk factors for cardiovascular disease among participants following a Kamut®-based diet. Another study on inflammation caused by feeding ancient Kamut® wheat pasta compared to modern durum wheat pasta to rats, published last year in Food Research International, also demonstrated Kamut® grains' protective effect against oxidative stress and inflammatory status, as well as higher nutritional content. Furthermore, although the company does not claim that Kamut® has more “digestible” gluten than other wheat varieties, some wheat-sensitive people claim they can tolerate it better than regular wheat. Indeed, a 2014 study published in the British Journal of Nutrition showed improved symptoms among IBS sufferers.

In London, the Quinns also showcased a handmade, 100% pure, plant-based soap from Bob's son-in-law Andrew's The Oil Barn, made with 25-50% of their safflower oil. This is yet another sign of the industrious spirit that characterizes Bob and his family, always searching for sustainable ways to farm the land and bring good products to market.

This article was originally published in Organic & Wellness News.