Origins and relevance in today's world

The annual Oktoberfest is the most famous beer festival in the world, attracting more than six million visitors to Munich with over seven million litres of beer. Despite its name, most of it now takes place during the last two weeks of September and only the first week of October. As its popularity has increased, many smaller festivals named in its honour have taken place around the world, but how did this original Bierfest start?

It all began on 12th October 1810 when Crown Prince Ludwig, later to become King Ludwig I, married Princess Therese of Saxony-Hildburghausen. The citizens of Munich were invited to attend the five-day celebration on the fields in front of the city gates, which were named Theresienwiese ("Theresa's fields"), or 'Wiesn' for short, in honour of the Princess. With food, drink, music, dancing, parades and horse-racing, the event was so popular that the decision was made to repeat the festivities in following years. This included an agricultural fair, first held in 1811 and now held every four years, to promote the Bavarian economy. The horse races, however, ended in 1960.

Over time, more amusements and attractions were included as visitors flocked to enjoy the festivities. The number of beer stands also grew and in 1896, they were replaced by tents and halls, supported by some of the local breweries. Today, the largest ones hold up to 10,000 people on two levels, with long wooden tables and benches indoors and outdoors.

While attracting beer lovers from every continent, most visitors are German with the majority unsurprisingly coming from Bavaria. This year, the new "Chaos Pendel" ride ("Pendulum of Chaos") with its two cabins on a rotating arm entertained the more adventurous punters, although a full stomach of beer and sausages would not have been advisable!

Only six local breweries are allowed to serve beer at the Oktoberfest, all of which follow the Reinheitsgebot, the traditional German purity laws. This cornerstone of Germany's brewing heritage was introduced in 1516 by Duke Wilhelm IV of Bavaria. The decree allows only hops, barley, water and yeast (after its role in alcoholic fermentation was understood in later years) to be used to brew beer. Initially just relating to Bavaria, since 1906 it has applied to the whole of the country. Additionally, although allowed in the rest of Germany for all beers, in Bavaria malted grains are permitted for top-fermented beers only.

Purpose of the Reinheitsgebot

According to the German Brewers' Association, the Reinheitsgebot was introduced for three reasons:-

Facing the challenge from the craft beer revolution

Despite the strong traditions of the purity laws, they do not have universal appeal in today's craft beer world. An increasing number of German brewers have challenged what they see as a straightjacket that hampers creativity by its insistence on only using four ingredients. 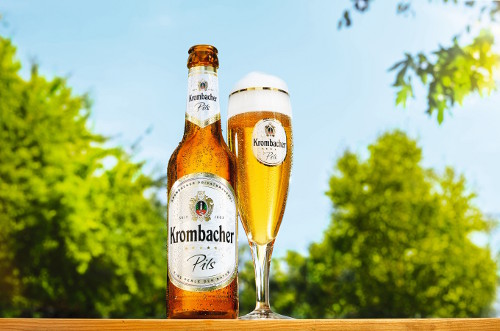 Nevertheless, the German purity laws remain hugely significant and important to the country's breweries, as Stephan Kofler, UK Sales & Marketing Director of Krombacher, describes. "The German purity laws are pillars that our brewery and the German beer industry as a whole are built on. They set us apart from other international brewers and ensure we use only the finest ingredients plus time-honoured production methods with the core objective of producing the best beer. Whilst awareness and interest of craft beer has gone through the roof in recent years, Germany's brewing heritage and reputation for excellence have been built over the last 500 years and have remained undiminished - even with the increased excitement around the small and the new. I actually think the craft boom has helped quality brands like Krombacher as it has meant an increased number of consumers taking an interest in unique, brewed-at-source brands who put taste quality above all else."

The Oktoberfest celebrations spread to the UK

Even though Krombacher is not involved in the Munich Oktoberfest, the brewery has been incredibly successful in exporting the celebrations to world markets, Stephan Kofler explains. "In the UK, we always have a busy schedule of events in the classic German bars such as Bierschenke, Zeitgeist and Bavarian Beerhouse plus we always look to support and run our own events where possible. We recently ran an Oktoberfest BBQ at the Express Tavern in Kew showcasing our full range and we even made some Beerwurst for the occasion!"

The global beer landscape has changed radically since the last century. A plethora of ingredients, flavours and brewing techniques abound with more choices available than ever before. With traditional top and bottom-fermented beers still being brewed around the world, the Reinheitsgebot continues to be relevant, not just to German drinkers, but to fans of good beer wherever they are. Prost!