Enjoy a beer the Neitiv way!

Wiltshire-based producer Neitiv has launched the UK's first coconut flower beers. Including three distinct variants, the new range is 100% vegan, low-calorie, gluten-free and uses coconut flower drops as a core ingredient. Made with premium British lager, the beers are all sustainably produced in the UK.

Focusing on three key areas - taste, sustainability and empowerment - Neitiv introduces a unique flavour profile to the beer category with its Coconut Flower Beer range. With the ethos of empowering all people to enjoy beer without the negative stereotypes, Neitiv is determined to make beer accessible for all. Sustainability is also key to the brand, which aims to be the most sustainable option on the market through its fully recyclable packaging and harvesting techniques.

Coconut Flower Beer is brewed with lager yeast and takes around eight weeks to produce. Primary fermentation uses malted barley, oats, hops and water. For secondary fermentation, coconut flower drops are added with their live cultures (yeast and bacteria). This creates a sedimentation in the finished beers which remain unfiltered to retain their full, natural flavour, purity and freshness. 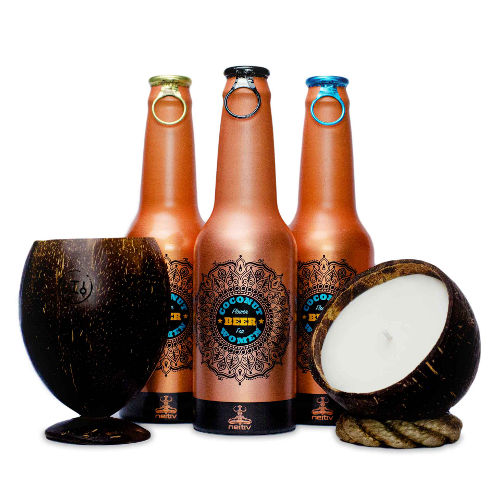 The range comprises three types of lager, all hazy pale gold in colour and with the slogan 'Coconut Flower Beer For Women' on the front label of the bottle:-

ABV 1.5%
Calories: 28kcal/100ml
Floral on the nose, the palate is juicy and medium sweet, with a core flavour somewhat similar to coconut milk. There's a delicate beer-like bitterness and mouthfeel with a hint of citrus, while the finish is long and not watery or thin, despite the low alcohol content. If you like shandy or radler, then you'll probably like this too. It's light, easy and refreshing to drink and you could also mix it into smoothies or gin cocktails.

ABV 2.0%
Calories: 24kcal/100ml
This beer is bright and fresh with delicate aromas and flavours of coconut water, lemon and lime. There's light hop bitterness too and a gentle finish.

ABV 4.0%
Calories: 38kcal/100ml
The nose and palate show light spice, coconut, lemon and herbal hints. This is a crisp, smooth beer with a mild hoppy finish. As the strongest of the range at 4% ABV, it has a slightly weightier mouthfeel than the other two beers, while still feeling light.

Coconut flower drops form naturally from the flowers of the coconut tree. Rich in antioxidants, they contain more than twenty minerals. They are high in protein and amino acids, as well as having a low glycaemic index and calorie content. Traditionally, skilled tree climbers would tap and collect the drops from the coconut palm infloresecence before sunrise. These drops were consumed as a daily health booster and as an Ayurvedic remedial elixir. You can find more information on this ancient practice on Neitiv's website.

In the UK, only 17% of women drink beer in comparison to 53% of men, according to The Gender Pint Gap, published in 2018 by women and beer interest group, Dea Latis. Yet women have been involved in making alcoholic drinks for thousands of years. In medieval Britain, brewsters took charge of beer production, typically within the home. Over time, as brewing became a commercial business, men began to dominate the industry.

The UK has the lowest percentage of female beer drinkers in the world. This is due largely to the way beer is presented within a male-dominated beer culture. Dea Latis' 2019 report, The Beer Agender, concluded that women would switch to beer if it were not associated with pints, bloating and sexist imagery. The report also said that if beer reinvented itself like gin, adding elegance, better glassware and a premium serve, then more women would enter the category.

Neitiv is on a mission to smash negative gender stereotypes, challenging cultural stigmas that exist in several cultures towards women drinking beer. For some people in the UK, the notion of 'beer for women' will be controversial. However, the company is clear that the intention here is solely to raise awareness, provide solidarity and challenge negative attitudes. Vaani VetriKo, Co-Founder of Neitiv comments; "As a woman from Malaysia, growing up I learnt that drinking beer was frowned upon and something I wasn't able to enjoy. Neitiv was created to empower all people to enjoy great tasting beer. As part of this, we're supporting projects such as All Yours Period Poverty as we want to enable people in all areas of their lives. We have exciting plans for the future with new product launches and support for more projects that help to empower all people."

The three Neitiv beers are refreshingly different with unique flavours from the coconut flower drops. Time will tell whether they will appeal more to women than to men. However, with an increasing number of people experimenting with their beer choices at home, they should appeal to anyone seeking a more unusual beer experience that offers lower alcohol, lightness and a sweet touch.

You can buy the lagers here on Neitiv's website in packs of eight (RRP £34.40) or a Discovery Pack, which includes one of each variant, a Coconut Shell Candle and a Coconut Shell Cup (RRP £22.30) for a deliciously relaxing experience.