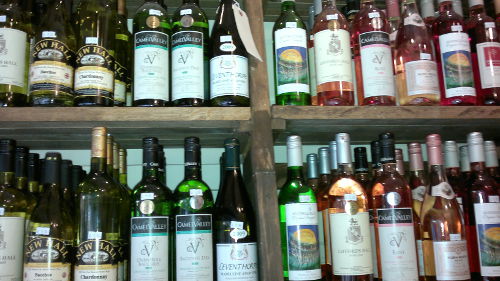 So seriously, is there anybody left who still thinks English wine is a joke? Well, undoubtedly yes, but then these are perhaps the same people who think that the only German wine is Liebfraumilch, ignoring the fact that arguably the best white wine in the world is made from Riesling in that country. 2012 was a difficult year for English viticulturalists, with the weather decimating many plans, the most high profile casualty being Nyetimber who abandoned their harvest. Nevertheless, the latest English Wine Producers Trade & Press Tasting, held in London on 9th May 2013, demonstrated the seriousness with which the English wine industry should now be held and there was a particularly good selection of wines from the excellent 2009 vintage. Following on from English wine’s first and successful representation at Prowein in Düsseldorf earlier this year, the sparkling wine category was heavily and justifiably represented. Having already gained a global reputation for producing some of the best award-winning sparklers in the world, this was an opportunity to gauge how far the industry has come and to check out some of the still wines that are emerging.

One of the real finds for me was Bluebell Vineyard Estates from the South Downs. Their Hindleap Classic Cuveé 2009, made from 48% Chardonnay, 31% Pinot Noir and 21% Pinot Meunier, had aromas and flavours of stonefruit, apple and lemon with a creamy, toasty character. This is an extremely well-made wine from one of the country’s newer vineyards.

Jenkyn Place Vineyard is a small estate in the North Downs, concentrating on producing quality sparkling wine. Their Brut 2009, made from 65% Chardonnay, 27% Pinot Noir and 10% Pinot Meunier, was delicious, with its apple, peach and brioche characteristics. I look forward to trying this elegant wine again.

Camel Valley Vineyard consistently produces some of my favourite English still and sparkling wine. Their star offering this year for me was the White Pinot 2010, made exclusively from Pinot Noir, with its orange and honey notes on the nose and palate and a long, beautiful finish. Their Brut 2011, made from 50% Seyval Blanc, 25% Chardonnay and 25% Reichensteiner is further proof that quality sparkling wine need not always be made from the traditional Champagne grape varieties. This exhibited notes of stonefruit, complemented by subtle flavours of biscuit and toast. Their Chardonnay 2009 had a lemon freshness with hints of honey.

Ridgeview Wine Estate’s list of awards is testimony to their world class status. Their Bloomsbury 2010, made from 61% Chardonnay, 27% Pinot Noir and 12% Pinot Meunier, demonstrated orange, melon and toast notes with a well-balanced finish. I feel that this wine can develop further, so would benefit from another two years in bottle.

The benefits of ageing can certainly be recognised in Chapel Down’s Pinot Reserve 2006, made from 70% Pinot Noir and 30% Pinot Blanc. This showed complex aromas and flavours with notes of hazelnut and honey, while still retaining a refreshing lime-like acidity on the palate. Henners Vintage Reserve 2009, made from 70% Chardonnay and 30% Pinot Noir, had a floral, citrus and biscuit nose, followed by similar notes on the palate with some apple present too. Furleigh Estate’s lovely Blanc de Blancs 2009 had notes of green apple, lemon and toast. It justifiably won a UK Vineyards Association Wine of the Year Competition 2012 Gold Medal.

Nyetimber’s 2003 Blanc de Blancs, which I wrote about after last year’s English wine tasting, remains one of my favourite English sparkling wines of all time. However, this year, Nyetimber brought along their 2007 vintage which had an elegant lime freshness, complemented by notes of baked apple and butter. This can be drunk now or kept for a few more years to develop further complexity. Their Classic Cuvée 2008, made from 79% Chardonnay, 13% Pinot Noir and 8% Pinot Meunier, had lighter notes of citrus, nuts and honey with a good finish. I must also recommend Nyetimber’s excellent Demi Sec NV, made from 100% Chardonnay. This was a real delight with its refreshing apple and lemon acidity, complemented by delicious notes of hazelnuts and honey.

Both Camel and Nyetimber unsurprisingly had top-class examples in this category. Following on from the success of the 2010 vintage, which won a Decanter World Wine Award Gold Medal, Camel Valley’s Pinot Noir Rosé Brut 2011 was bursting with ripe raspberry-rich aromas and flavours, the emphasis clearly on pure fruit concentration. In contrast, Nyetimber’s Rosé 2008, made from 58% Chardonnay and 42% Pinot Noir, had a good degree of complexity, characterised by a floral nose and notes of strawberry and honey with hints of blackcurrant on the palate and a touch of salinity too.

I was looking forward to trying Hush Heath Estate’s Balfour Brut Rosé 2009, which has garnered loads of praise, befitting its tag as "England’s most expensive Pink Fizz". Made from 52% Pinot Noir, 37% Chardonnay and 11% Pinot Meunier, this was a more delicate example of a sparkling rosé with red fruits, gentle spice notes and a subtle salinity at the start, followed by a citrus and strawberry finish.

Henner’s Rosé 2010, made from 56% Pinot Noir and 44% Pinot Meunier, also deserves a mention with its powerful berry fruit concentration. This is still quite young and should be at its prime after a year or two. a’Beckett’s Vineyard from Wiltshire had their 2009 Cuvée Victoria Rosé available for tasting. Made from a blend of Pinot Noir and Seyval Blanc, this demonstrated a good mix of flavours, including strawberry, vanilla and brioche and was an enjoyable discovery. East Devon’s Lily Farm’s Sparkling Rosé 2010, made from 50% Pinot Noir Précoce and 50% Seyval Blanc, was a more delicate example with light strawberry notes evident and won a Silver Medal in The English And Welsh Wine Of The Year Competition 2012.

Predictably, this section was dominated by the whites. Biddenden Vineyards’ signature wine is their Ortega. The 2012 vintage is aromatic with notes of peach, apricot and some tropical fruit too. Brightwell Vineyard had their 100% Huxelrebe Oxford Gold 2011 and 2012 available for tasting. Both were highly aromatic, with notes of peach, apple and some mango as well. Astley Vineyards’ Veritas 2011, made from 100% Kerner, was a different style of off dry wine with notes of apple, almonds and a refreshing citrus acidity. However, the most interesting of the white wines would have to be the oaked Chardonnay from Gusbourne Estate. Their Guinevere 2011, which I first tasted at English wine specialists, Wine Pantry, was elegant and a fine example of a style that perhaps more English still wine producers could emulate. With notes of lime, vanilla and nuts, this has the potential to develop further complexity with bottle ageing. Judging from the response of fellow tasters at the show, this went down very well.

Bacchus is England’s signature white grape variety – not England’s answer to Sauvignon Blanc, as it is sometimes touted. I always think it’s wrong to compare with another grape or wine style, as Bacchus should be judged on its own merit and not given the impression of being a second-rate copycat variety, which is unjustified. It is, in fact, a cross of Silvaner and Riesling, crossed with Müller-Thurgau and in English growing conditions thrives, with differences in expressions evident throughout the country. Chapel Down’s Bacchus Reserve 2011 from Kent was full of fragrant elderflower and gooseberry aromas often associated with this grape variety and showed plenty of ripe fruit and acidity on the palate. Although wine made from Bacchus is often drunk when young, the variety does have the ability to age in good years, developing some of the waxy qualities which Riesling brings. Therefore, a wine of this fruit intensity, good acidity and weight could be kept for a couple of years or so. In contrast, East Anglia often produces lighter, more delicate expressions of Bacchus and both Giffords Hall Vineyard and New Hall Vineyards did not disappoint. Like the previous years’ vintage, both their 2012 Bacchus wines were delicate with notes of elderflower, peach and gooseberries. The three examples mentioned here would go very well with Thai or Chinese food, in particular.

English rosés, reds and dessert wines are still in the relatively early days of establishing a widespread reputation for quality, although there are plenty of good examples around. Indeed, I previously wrote an article for Speciality Food Magazine on English Rosé, as I felt that this was a category to look out for in the future. Global warming may play its part in years to come, but Bolney Estate near Haywards Heath, produces some interesting red wines and their Lychgate Red 2009, made from 80% Rondo and 20% Dornfelder, had plenty of berry fruit and leather characteristics with soft vanilla overtones.

Overall, I felt the standard of sparkling wine at this year’s tasting was higher than last year, whereas the still wine was not quite up there, although there were some definite highlights. However, many of the top English still wines were not represented, including my personal favourite, Camel Valley’s Darnibole Bacchus. English wine may have some way to go before it reaches consistently high standards, but it is going in the right direction. Let’s hope that the industry can continue to build on its assets, strengthening its reputation for producing quality wine and featuring more regularly on restaurant wine lists.

English Wine Week 2013 runs from Saturday 25th May to Sunday 2nd June. I’ll raise a glass to that!