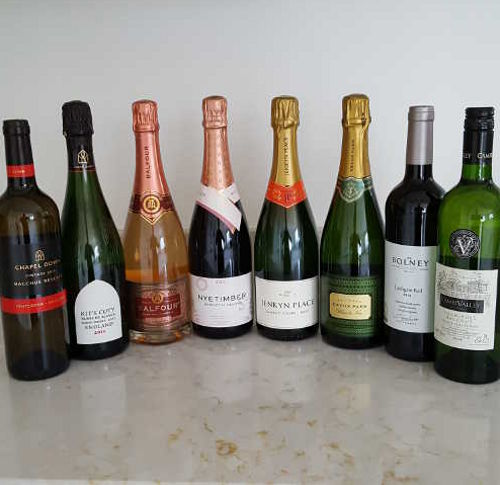 When presenting a talk on the history of English wine, followed by a tasting, there's certainly no shortage of material and suitable wines to do the subject justice these days! Journeying back in time in a virtual vinous Tardis to discuss Roman era pre−Brexit drinking through to Ray Barrington Brock, the introduction of Seyval Blanc, the modern industry's revival and the effects of climate change (see my article last year), today's UK viticulture scene is a far cry from Tacitus' belief that the English climate was "objectionable" and unsuitable for growing grapes! With a plethora of international awards, increasing exports, new plantings and an improved understanding of which grapes grow best in which locations, it's a great time to showcase a selection of this country's wines, but which ones to go for?

With only eight to select for a wine club meeting and catering for 45 eager tasters, the choice has to be meaningful − wines that tell a story and play a role within the renaissance and burgeoning success story of English wine, as well as reflecting the development of cool climate viticulture. It's not possible to show the full range of styles and grapes, hence some notable omissions in the list that follows, but I wanted the wines to highlight some of the variety that already exists. Moreover, my aim was to stimulate debate in the context of how the industry has developed so far and where it might go in future.

So where better to start than the face of modern English winemaking, Dermot Sugrue and one of his newer releases! 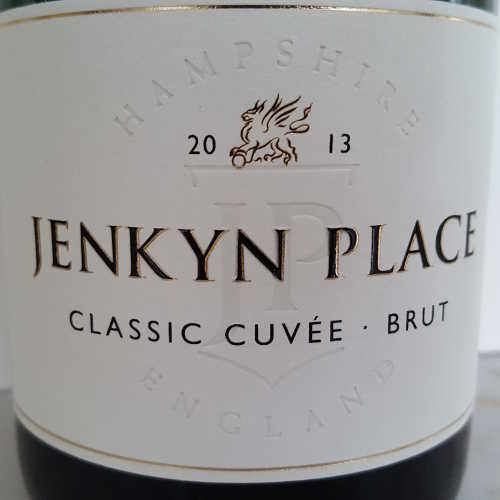 Simon and Rebecca Bladon began planting vines in the abandoned hop fields of their Jenkyn Place estate in 2004. With further plantings in 2007 and 2010 (15,000 vines over five hectares), their 12−acre vineyard on the North Hampshire Downs has been producing award−winning sparkling wine from Chardonnay, Pinot Noir and Pinot Meunier grapes. The soil at Jenkyn Place has a vein of greensand over chalky marlstone on south−facing slopes and is ideal for cultivating the three traditional Champagne grape varieties. Indeed, this part of southern England was known in the 1930s as the 'banana belt' due to the fruit−growing suitability of its soil.

Nose: notes of bruised apple, citrus and stone fruit with a hint of smoke.

Palate: these fruity notes continue with clarity, purity, excellent acidity and a good finish. This wine should age well over the next few years.

A fabulous start to this tasting, the wine proved very popular among the attendees. 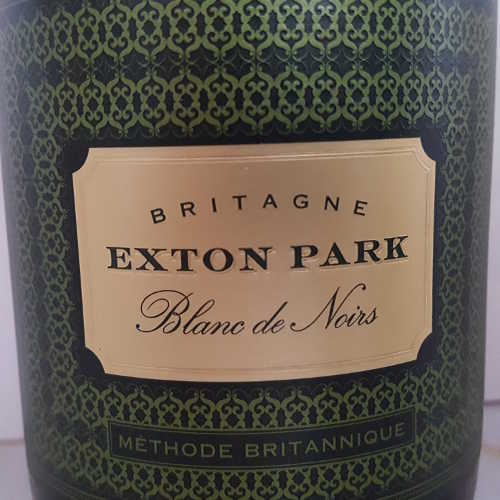 Another relatively new vineyard, first planted in 2003, Exton Park is located on the chalk slopes of Hampshire's South Downs National Park. With plantings of Chardonnay, Pinot Noir and Pinot Meunier over three years, the vineyard now comprises 55 acres at 60−120m above sea level. French winemaker, Corinne Seely, is determined to express the uniqueness of English terroir, as she told me once: "As a winemaker, I appreciate the importance of terroir and, as a French winemaker I find English terroir fascinating to express."

Nose: floral with notes of brioche, red fruit and a hint of peppery spice.

Corinne made this wine with the English palate in mind and everyone at the tasting agreed that she succeeded! 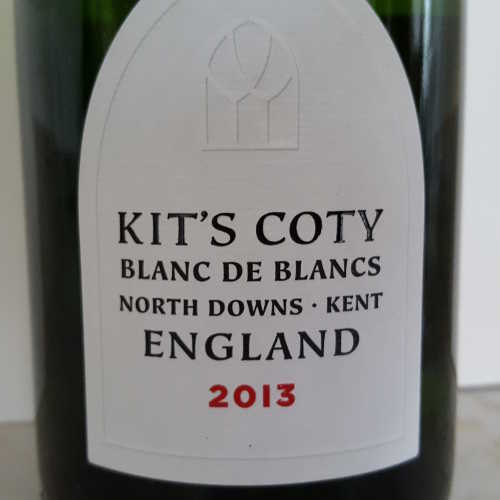 Chapel Down is home to the UK's largest wine producer and one of England's most successful. They also make Curious beer and cider and now grape−based vodka and gin. Based at Tenterden in Kent and set amongst 22 acres of vineyards, the first of which was planted in 1977, they also have a larger 95−acre vineyard, Kit's Coty, in nearby Aylesford on the North Downs, planted with Chardonnay, Pinot Noir and Bacchus on perfect, gentle, south−facing slopes of chalky, well−draining soil. This wine is the first Blanc de Blancs from the Kit's Coty site and is a fine example of the style.

Palate: full, fruity and rounded, the partial barrel fermentation (20%) and three years lees ageing lend a creamy biscuit richness to this wine, complemented by the fruity depth, good acidity and a long finish.

Two very contrasting rosés followed, emblematic of the quality possible in this sector, the first with an enticingly pale copper hue, the second showing a beautiful sunset pink colour. 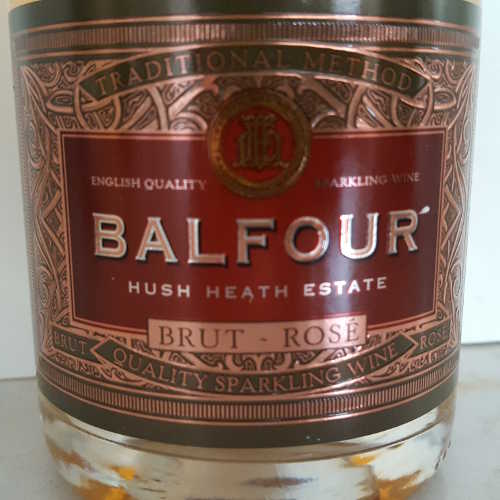 Based near Staplehurst in Kent around a 16th century Tudor textile industry building, Hush Heath makes a range of wine, cider, apple juice and a delicious apple wine. They only use fruit grown within their 400 acre Hush Heath Estate and have 40 acres dedicated to Chardonnay, Pinot Noir, and Pinot Meunier in vineyards first planted in 2002. This figure will increase to 50 acres this year with three new vineyards being planted. Soil is deep Wealden clay, unique to this corner of Kent, which provides both dense structure and vibrant, lively acidity. Included within the grounds are 20 acres of Kentish apple orchards, the first of which was planted over thirty years ago. The inaugural 2004 vintage of Balfour Brut Rosé was awarded a Gold Medal and Trophy at the International Wine Challenge in 2008 and the winery has garnered many more accolades since then.

Nose: floral and fruity with red apple plus hints of stone fruit and ginger spice.

Palate: very expressive with apple, cherry and delicate citrus notes vying for attention, along with touches of herbs and spice. 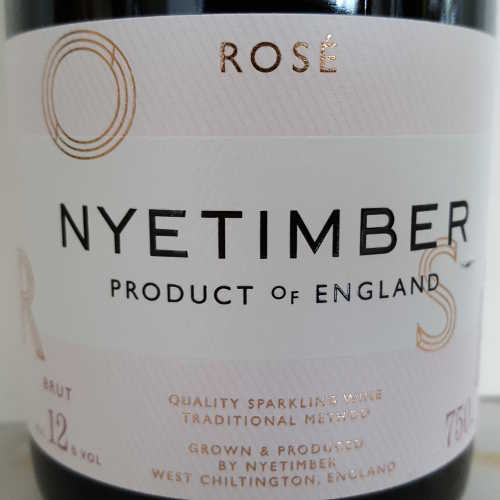 Although the production of English sparkling wines from Chardonnay, Pinot Noir and Pinot Meunier started in the mid−1980s in Kent, Nyetimber was the first producer to exclusively grow these three celebrated grape varieties. Two Californians, Stuart and Sandy Moss, decided, in 1988, to plant a vineyard at Nyetimber near Pulborough in West Sussex and their first release, a 1992 Blanc de Blancs, put English wine on the international map. Since then, the company has gone from strength to strength, winning a string of medals in various competitions, with Canadian duo Cherie Spriggs and Brad Greatrix leading the winemaking operation today. Nyetimber currently has 430 acres (170 hectares) of land under cultivation, but in 2016 bought the entire 108−acre site of West Chiltington Golf Club. It's the UK's biggest wine producer by land currently under vine with estates spread across West Sussex and Hampshire. Having been such an integral part of the modern English winemaking revival, no English tasting would be complete without a Nyetimber wine! Indeed, my own 'epiphany moment' in English sparkling wine in the mid−noughties was Nyetimber's Blanc de Blancs 2003, an amazing wine with such beautiful textural richness, made by Peter Morgan.

Nose: red fruit notes dominate with a hint of aniseed and flowers.

Palate: creamy, fresh and concentrated with red berries, cherries and bready notes, this is soft, rich, rounded and elegant. 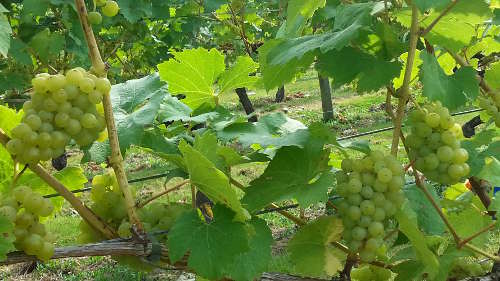 Bacchus grapes on the vine.

Bacchus, an early ripening cross of Sylvaner and Riesling crossed with Müller Thurgau, is the third most planted variety in this country, behind Chardonnay and Pinot Noir. Well suited to UK growing conditions, it offers a variety of expressions dependent on site, vintage, vinification method including any use of oak and bottle age. Indeed, I once kept a 2003 Bacchus for ten years and it had developed an aged Riesling−like character, reflecting its parentage and a sparkling English Bacchus I served at a New Year's Eve party many years ago proved very popular! 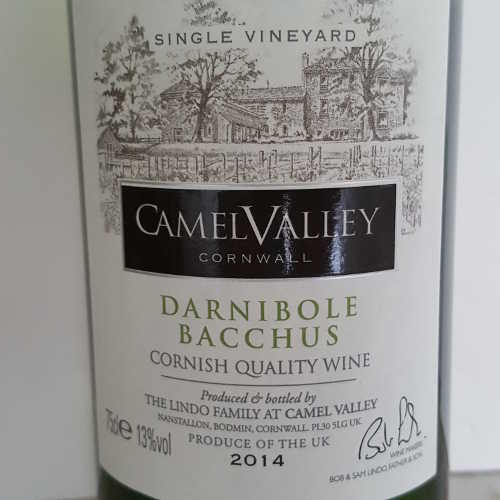 Ex−RAF pilot Bob Lindo and his wife Annie planted their first eight thousand vines on sun−drenched slopes near the Camel River in 1989, having moved to a sheep and cattle farm in the Cornish countryside several years beforehand and within two decades have achieved phenomenal success in global competitions. However, among their most recent achievements is the European Union award of PDO status (Protected Designated Origin) for their 'Darnibole' vineyard in April 2017, making it the first and currently only UK single vineyard to be awarded this 'First Growth' accolade. It's a unique site of rich, free−draining soil over an ancient slate sub−soil and benefits from a long, cool growing season. The Bacchus grown there results in a distinctive style of wine, full of crisp acidity and defined minerality with a delicate, restrained fruit profile.

Nose: delicate and aromatic with notes of elderflower, lime and a hint of green apple.

For many years, this has been one of my favourite English still wines and can develop a slight honeyed peach character with a few years bottle age. 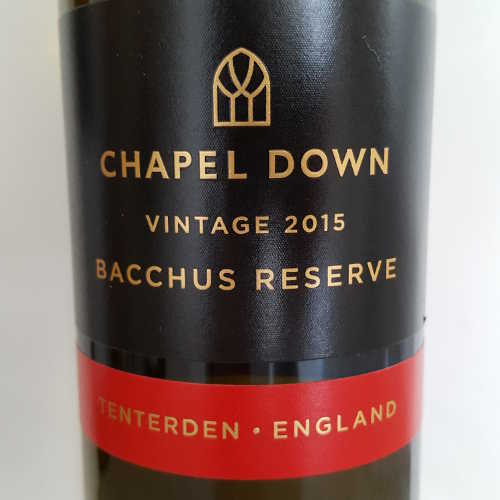 If anyone was under the impression that all Bacchus is the same, then comparing this example with the previous one should dispel all misconceptions. This particular Chapel Down Bacchus is always made by selecting grapes from the best vineyards in Essex, Kent and East Sussex to produce a richer, riper style.

This is a well−made example of a more fruit−concentrated style of Bacchus that would be a great match for many aromatic Asian dishes. 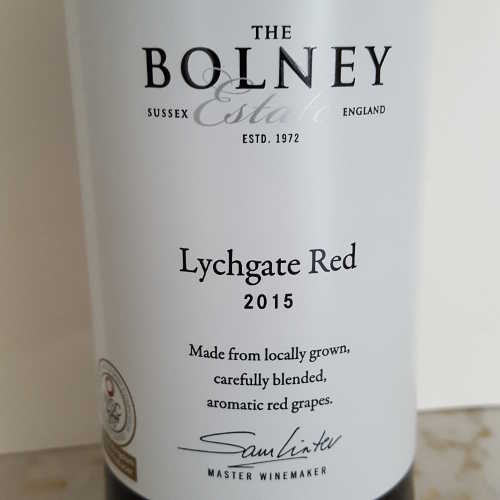 Bolney Wine Estate, near Haywards Heath in West Sussex, is one of the country's longest established vineyards, making wine since 1976. Situated on well−draining, sandstone−rich land listed in the Doomsday Book, the winery has already won many domestic and international awards and continues to invest in its future. Currently with 40 acres of vineyards, a new 66−acre site is soon to be added, enabling the winery perhaps to keep up with demand for their sought after wines.

Hybrid variety Rondo is not usually viewed as a grape capable of making top quality reds, but is better known for its ability to ripen reliably and relatively early, having high resistance to winter frosts and a host of diseases (downy mildew in particular). It certainly has its place in the history of cool climate viticulture, producing full or medium bodied wines with a deep red colour and is often used successfully for blending with other varieties. Indeed, Bolney's 2009 and 2010 Rondo blends earned several awards between them. However, 2015 saw a particularly good harvest for Rondo, which ripened well thanks to the hot weather in the early part of the season and dry weather in September and October. Consequently, the decision was made to produce the Lychgate Red as a single varietal, rather than adding a small proportion of Dornfelder or Dunkelfelder, which they would normally do.

Nose: black fruit aromas with a hint of peppery spice.

Palate: medium−bodied, fruity, earthy and herbaceous, with red berry and blackcurrant notes, a touch of smoke plus smooth tannins and good acidity.

The wine certainly proved an interesting talking point among the wine club attendees who were unfamiliar with the grape variety and were surprised at the fruity depth of this wine, smoky hints and food compatibility. 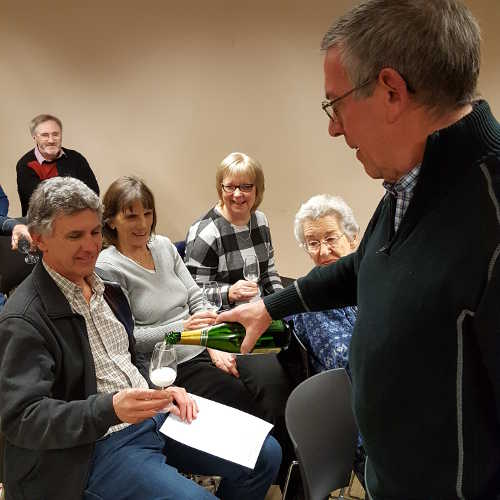 Members of Uxbridge Wine Society eagerly awaiting their next sample!

The choices here do not represent a top 10 of English wines, although some might qualify in their respective categories. None of the still wines was based on Chardonnay or members of the Pinot family and Ortega, another promising grape, was not represented either. The idea was to demonstrate a selection of affordable, good quality wines that tell a story and have real relevance within the history of English wine for a wine club that had never previously featured a similar selection. Many other wines were recommended, in particular some of the increasingly impressive still Pinot Noirs made from Burgundy clones by a few producers. Ultimately, price and familiarity remain hugely significant factors in wine consumers' buying habits, but the choices here certainly made this particular audience consider buying English wine in future and that's something worth raising a glass to!