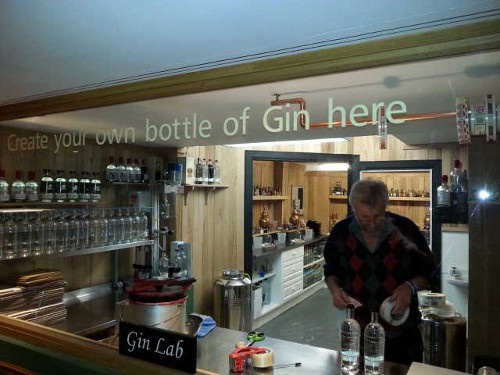 The Gin Lab at City of London Distillery: image by Robin Goldsmith.

The UK 'gin-naissance' continues to fly the drinks flag for Brand Britain, but what does the future hold?

British gin sales are booming. The number of distilleries in Britain, which now stands at 315, has more than doubled in the past five years, with 42 new UK spirit makers starting up last year alone. Hardly a month seems to go by without a new gin appearing on the market, a distillery opening, another gin feted in the press or a medal won by a UK distillery in a prestigious competition. Indeed, the growth in overall alcohol sales, as reported by the Wine and Spirit Trade Association (WSTA) in their Market Report for January to March 2018, has been largely attributable to gin, which is also one of the key categories boosting price increases and premiumisation in the sector.

According to the WSTA, domestic gin sales recorded in the 12 months to the end of March 2018 reached almost 55 million bottles, up 28% in volume and 33% in value on the same period the previous year. The gin industry is already worth nearly £2 billion to the UK economy and is forecasted to grow by 37.2% over the next three years. However, it's not just domestic sales that have risen. British gin is also in demand overseas with exports rising by 19% in value in the first six months of 2018, according to HMRC figures obtained by the WSTA and are predicted to increase further, reaching £600 million in value sales by the end of the year.

Despite continuing growth in the sector, Mintel analysts nevertheless predict a slower rate in the period up to 2022 as the fashion for gin plateaus. Chief driving factors for this expected slowdown are the declining numbers of under-35s, the age group showing the highest consumption of white spirits and a general consumer tendency, especially among the rising number of over-55s, to restrict alcohol intake. Additionally, although the popularity of British-made gin has shielded the category from some of the consequences of exchange-rate led inflation, wider cost pressures are still expected to have an effect. However, continued investment by companies through NPD and marketing should help to stimulate future sales.

Brexit remains the proverbial elephant in the room as uncertainty looms over its potential impact. With juniper and many other commonly used botanicals such as orange and lemon peel imported from Mediterranean countries, there are concerns that the British gin industry could suffer if ports collapse and goods cannot get through. This would hit hard some of the UK's smaller craft gin distillers who may not have the capacity nor purchasing power to stockpile goods, according to the WSTA's findings.

Clearly, there are grounds for both optimism and a degree of apprehension over how long Britain's so-called gin-naissance will continue to drive spirit sales, but the trend for premiumisation in the alcohol sector is certainly a positive sign for the gin industry's future.