There's a whisky for everyone! 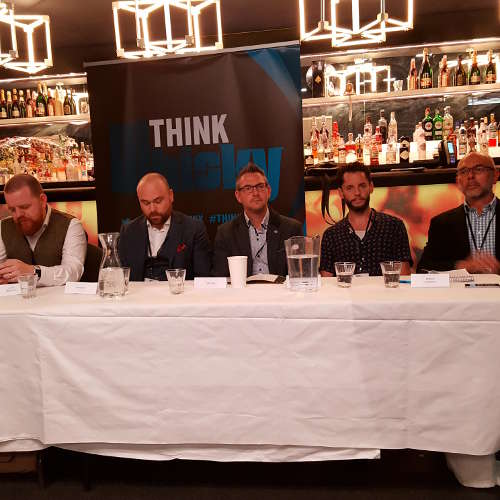 Whisky is the top off-trade spirits category in the UK and the second largest in the on-trade. Following on from the successful Think Gin and Think Rum events, it was only a matter of time before Agile Media, in conjunction with Drinks Retailing News and Harpers launched Think Whisky.

The event, which took place on 17th September, kicked off with a panel debate on broadening whisk(e)y's appeal, followed by three further masterclasses and, of course, plenty of wonderful whisk(e)y. However, it was the opening discussion that really set the theme for the day and gave plenty of food for thought albeit in liquid form!

In contrast to Scotch whisky's more traditional male-dominated image, American and 'new world' whiskies' contemporary appeal can make them a more attractive proposition to younger drinkers. So how can the industry democratise the whole category to appeal to a much wider demographic, including younger people and women?

High street and online retailers and whisky bars can deploy a variety of strategies to reduce the perceived intimidation and stuffiness of the whisky category. Some of these ideas are described below.

"Give people permission to disagree with tasting notes"

Education is vital to counter unhelpful stereotypes and to encourage people to try different whiskies. Archie McDiarmid, Manager of Luvians Bottleshop which has a strong following among St. Andrews University students, recommends an open-minded approach. "I often see gender-based descriptors being used, describing a whisky as male or female, which is ridiculous. We try to reassure people when they try our whiskies or come to our masterclasses that everyone's sense of taste is unique to them. The most important palate is your own, made up of all your positive and negative life experiences. It's a combination of sense and memory, so we need to give people permission to disagree with tasting notes. We sign our notes to show that they're personal and these are often used as starting points of a conversation."

Education should be used to make people less apprehensive about trying different expressions of whisky and also to correct widely held, yet mistaken, perceptions about the category. For example, many consumers associate Scotch whisky with peat, but the percentage of Scotch whisky that is actually peaty is less than 10%!

The whisky industry can learn from the success and appeal of craft beer which has opened up that category to a much wider demographic. Archie encourages his customers to try different whiskies, focusing on the flavours. "The young don't care about traditional Scotch Whisky. What they're really interest in is the flavour in the glass. Therefore, if you're delivering a quality product that tastes good, make sure the customer is made to feel comfortable about trying a glass. Make the whisky accessible and don't just rely on the tradition and heritage of a brand."

For independent retailers in particular, having a selection of whiskies that appeal to different customers is another key consideration. At Luvians for example, they are keen to maintain a balance between known, accessible brands and a more esoteric range. "We stock whisky that appeals to us and the specialist market who will seek out Luvians as a destination store", explains Archie. "However, we also make our range appealing to somebody who walks in and doesn't know the category at all."

"Everyone speaks the language of flavour"

However, the way whisky is presented in stores and bars plays an important role too in demystifying the category and emphasising the different flavours. At specialist London whisky bar Black Rock, Tristan Stephenson arranges his bottles differently from the conventional country, region, distillery, expression method. "The traditional way of displaying whisky can be a nightmare for consumers, so we sort by flavour groups. Additionally, we have lighter whiskies at the top and heavier ones at the bottom of each of our cabinets, enabling us to have whiskies of different origin but with similar overarching flavour themes sitting next to each other. Everyone speaks the language of flavour and this approach opens up conversations between our bartenders and guests and among the guests themselves about what flavours they like. It's also good for enthusiasts or experts who can try other styles from the same flavour group."

Whisky-related searches on Google that link to the Waitrose website are predominantly from women, as are 60-65% of whisky purchases, often made for gifting. Spirits buyer John Vine recognises the need to make online navigation more straightforward for consumers. "For us it's about the information we hold and how to make the website much easier to shop, so that the whole category becomes more attractive for all people."

Just as with craft beer, modern branding adds eye-catching appeal for a younger demographic. The new wave of US whiskies", says Tristan, "are visually attractive with simple twentieth century typography styles on the labels making them more accessible. Scotch whisky should learn from this, although it may be difficult for single malts with their traditions and easier for blended malts. We don't want to lose all the traditional branding, but a more modern style is appropriate for some whiskies."

In addition to whiskies having contemporary bottle designs, cocktails can be a great gateway into the category, helping to break down barriers for young people. Joe Boxall, Group Bars Manager of Boisdale, notes describes this effect. "The rise of the highball has seen gin and tonics take a back seat. The biggest thing we've seen is product placement in big budget movies and TV shows. We trebled our output of Old Fashioneds with Mad Men as that's the in-drink on that show. Then there was the new Kingsman release which was related to whisky and aimed at a younger audience as well. So there's definitely been a marketing push around attracting younger people to the category."

Joe spoke about the importance of increasing people's confidence by providing flavour maps or talking to customers about the whiskies when giving them little nips to try. Panellists also discussed the legal constraints caused by 25ml and 50ml servings. The feeling was that flights of smaller measures would attract people to the category who may be apprehensive about trying a full measure. Additionally, with many new smaller distilleries with less stock entering the market, 20cl bottle sizes are expected to become more widespread. These would give people a chance to try several contrasting whiskies, potentially for the price of one bottle of one expression.

Whisk(e)y has far more variety than many consumers may be aware of. Better education at correcting unhelpful perceptions, demystifying and democratising the category will help to break down barriers to entry, particularly for young people. With expressions from light, almost vodka-like grain whiskies to heavier sherry cask-imbued and peated single malts, bourbons and corn whiskies with their sweeter styles, it's an incredibly versatile category. There surely is a whisk(e)y for everyone!