Thoroughly Modern Mead, made in London!

Of all drinks that conjure up images of bibulous feudal banquets, where Viking−like warriors toast the defeat of an enemy emperor with his fire−breathing dragons, surely it has to be mead! Game of Thrones and Harry Potter aside, mead has a long history stretching back through the ages and one linked to mythology and ancient cultures. Known as nectar or ambrosia to the ancient Greeks who believed it to be the drink of the gods and therefore possessed of magical powers, it is the world's oldest recorded alcoholic beverage. It was probably discovered in Africa by accident many thousands of years BCE, after rainwater in beehives produced an attractive (and intoxicating!) sweet−tasting drink for unsuspecting hunter−gatherers. Eventually after Louis Pasteur's discovery, cultured yeasts would be used instead of spontaneous fermentation.

There are various sub-styles of mead, such as:-

Mead remained popular in Northern Europe, as wine took over in the south of the continent. It even gave rise to the word 'honeymoon', which references the ancient Norse custom of giving newlyweds enough mead to last a month − their first moon of marriage − due to its believed aphrodisiac properties. Over time, meads were flavoured with different herbs, particularly in England and Wales, where the drink was also used for medicinal purposes. Mead was often made in monasteries during medieval times. However, with beeswax needed for ceremonial candles, honey became less available and more expensive, so ale and wine offered more viable alternatives. The industrial revolution led to a further decline in mead−making before the modern era has seen its resurgence buoyed by the craft beer movement, Hagrid's drinking habits and the feasts of Westeros! 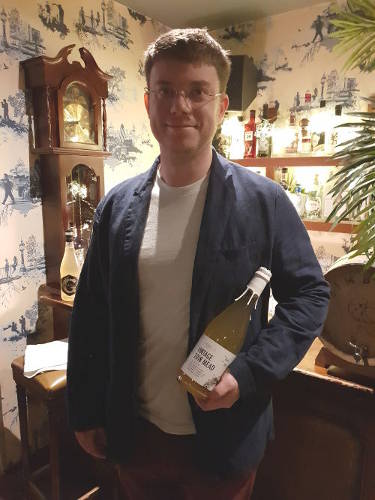 One of the most innovative of the current wave of young mead makers is Tom Gosnell, owner and founder of London's only meadery, Gosnells Mead, based in Peckham. Using just Spanish orange blossom honey, water and lager yeast, their 5.5% ABV London Mead is a modern interpretation of a traditional British drink. Lightly sparkling, drier and lower in alcohol than typical meads, it's light, floral, crisp and clean.

Tom was heavily influenced by the mead market in the US, which is growing faster than craft beer. There are now more than 500 craft meaderies using a massive range of way−out ingredients, flavours and styles. Tom explains further: "I'm just back from the US where mead is buzzing. In America, mead sales grew by 130% from 2012 and 2013, according to the American Mead Makers Association, largely due to the huge success of the TV series Game Of Thrones. Mead has come a long way from the days of monks, sorcery and enchanted castles!"

Tom talking further about mead's growth in the US and UK.

"US mead makers are looking to the future, and not to the past, unhindered by our British monastic tradition of making it deep yellow, at high alcohol and outrageously sweet. The monks needed it for internal warmth and to wax the vocal chords, but central heating and a modern palate have changed all that. So, five years ago, I started to make a lighter, drier style more akin to a buttery Chardonnay or a Blanc de Blancs Champagne. As it's a mere 5.5% ABV, we now find it in a wide diversity of London restaurants served as an alternative to wine. London bars are cottoning on to the versatility of modern meads as well, using the mead as a complex base for all sorts of fascinating cocktails such as with lime juice and tequila ('Meadarita'), with lemon and gin, or with rum and ginger.".

Gosnells can even offer frozen mead granitas, using their own Fro-Go machine to "present mead in a way those monks might not really have relished", adds Tom! Priced at £12.50, it's available from the Gosnells website.

Tom explaining why he makes his style of mead. 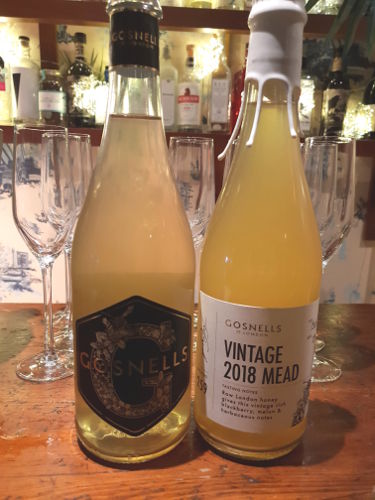 A bottle of London Mead and a bottle of Vintage Mead: image by Robin Goldsmith.

In addition to the London Mead, Gosnells have also made a dry hopped version, a barrel-aged one and seasonal meads too. However, Tom's latest exciting project is the release of his first ever Vintage Mead. Gosnells Vintage Mead 2018 is made from 100% London honey, sourced from hives in Woodberry Wetlands N16 and Lea Bridge Road E10. It has been specially brewed at the same strength as most wines, 12% ABV and presented in a beautiful wax-embossed 75cl bottle. It was fermented for approximately six weeks using lager yeast initially and then, when the ABV had reached 6-7%, wine yeast was added to increase the alcohol content and to give a different character. The slower fermentation allows more flavours to develop and the result is a sweeter, more complex mouth-filling mead, which Tom describes as demonstrating "the purity of the honey's urban roots."

For Tom, this new adventure represents a long-held ambition. "I had always dreamt of making a mead with local London honey - something that completely encompassed the flowers and blossom of the city - and I'm really pleased with the results. It's amazing the variation in flavour you get between different honeys and with the different weather-derived blossoms of each year. The hot summer of 2018 meant that the flowering season in London was earlier than usual and this has led to more typically autumnal flavours than you would find in our Gosnells 5.5% mead. It's incredibly complex and deep, with notes of blackcurrant, sloe and a hint of spice. It has a totally different taste profile from our main offering." Priced at £25, it's available from the Gosnells website, but be quick as only around 1000 bottles were made!

New for 2019, Gosnells has also launched two-hour 'Make your own Mead' courses to be held every Saturday throughout January to gauge demand. At the end of each session, guests will leave Peckham with a giant 4.5 litre bottle of their own fermenting mead. The masterclass will outline mead's history, along with Tom's own mead journey. There will also be a tutored tasting of Gosnells' range plus other styles of mead Tom has collected from around the world. Guests will be supplied with all the equipment needed to brew their own mead, selecting the core ingredients, mixing up the must and pitching the all-important yeast. They will then be briefed on what to expect from the bubbling, burgeoning fermentation process and how to finish the brews at home, which should take around a month. Team Gosnells will provide a mead-care helpline on fermentation anxieties and give tips on how to use mead with food and in cocktails plus suggestions on how to serve hot or cold. 'Make your own Mead' courses are priced £75 and can be booked online, along with tours. 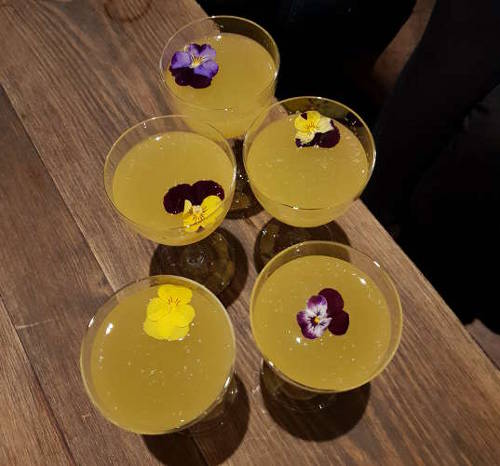 Rum cocktails made with Gosnells Mead: image by Robin Goldsmith.

On Fridays (4pm-10pm) and Saturdays (12pm-10pm), Gosnells opens up its tap room where you can enjoy a glass of their draught mead for £5. Alternatively, London bars serving Gosnells mead cocktails include Nightjar and Bar Swift. Whatever format you choose, one thing is certain - you'll be guaranteed a thoroughly modern mead from this innovative producer.