Craft beer in Germany: a report from Braubeviale

Braubeviale, Germany's yearly trade fair for the process chain of soft and alcoholic beverage production, is a hub of brewing and distillation equipment innovation and technology. In a nation whose drinks traditions are deeply entrenched in society, beer production continues to be a hugely important sector of the economy. The Reinheitsgebot, the centuries-old German Purity Law, remains the driving force behind the country's beer industry. This is despite the worldwide phenomenon of craft beer adding a plethora of ingredients to spice up the beer lover's palate with a gamut of modern and unusual taste sensations.

An earlier article on these pages discussed the history of the Oktoberfest and the Reinheitsgebot in the context of how craft beer in Germany is growing and challenging traditional notions of brewing. In this piece, we look further at the country's attitudes towards craft beer and how this was reflected at Braubeviale 2018. A general overview of the trade fair, which also includes some of the craft beer highlights can be found here.

One of many signs promoting craft beer at Braubeviale 2018.

According to DBB, the German Brewers Association, there were 82 more breweries in 2017 than the previous year, totalling 1,492. This is in spite of YouGov findings that 56% of Germans surveyed are unfamiliar with craft beer and only 12% of respondents identified themselves as knowing about and buying craft beer. So do these findings mean that there is still huge potential for the sector in Germany?

Craft beer made within the Reinheitsgebot

The Barth-Haas Group is the world's largest supplier of hop products and services. Benedikt Matsche, of subsidiary company Simply Hops is clear that craft beer is booming in Germany, but that traditional brewers are also successful. He stresses that it's perfectly possible for craft beer to be brewed according to the Reinheitsgebot and illustrates this with two contrasting beers. Firstly, Tilmans 'Der Weizen' is a traditional style of German Weisse, made with a contemporary touch by a young brewer. This shows typical characteristics of banana, citrus and sweet spice. "There are no restrictions on the hops used within the Reinheitsgebot", explains Benedikt. "For example, this beer uses a mix of German and French hops, but you can use hops from all around the world - there are around 80 commercially available. With the four core ingredients of hops, malt, water and yeast, there are so many different possibilities!"

The second beer is a modern German craft beer in a can, Frau Gruber 'Pleased to Meet You' IPA. Made by two childhood friends from Augsburg, this distinctly hoppy NEIPA brewed with a little oatmeal delivers plenty of tropical fruit notes and a soft, slightly creamy mouthfeel. Both beers comply fully with the Reinheitsgebot, shown by the use of the word 'Bier' on the label.

"People are complaining that beer can be too cheap. Employees should be properly paid, so cases should really cost between €16 and €20."

Mark Zunkel, an American brewer living in Germany and Technical Manager at Barth-Haas, offers his thoughts too. "The craft beer scene in the UK is totally different from Germany; they're two separate worlds. Germany has an established market for beer and food, especially for regional specialities and people are very price conscious too. They don't want to pay too much! After all, beer is food - it's integrated into food law and is something basic that everyone feels they should get for good value. It's traditional here to buy cases of beer and 20 half-litre bottles usually don't vary much from €10-€16, although local specialities might cost €20 for a case. My perception is to change this mentality, similar to six-packs in the US. It's rare in Germany to buy single bottles but this is starting, although currently it's a very niche market. If you can buy a whole case for €10, why would you buy a single bottle of craft IPA at €3?" 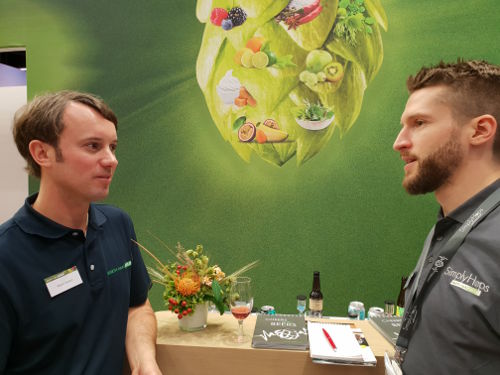 This is clearly very different to craft beer markets like the UK, where supermarket shelves are stocked with a wide range of different styles of beer and consumers can buy single bottles or cans. "In Germany", says Benedikt, "it's only the big companies that might sell smaller packs of six, ten or twelve."

Both see the new generation of brewers and drinkers, particularly in the cities, as the creative, driving forces of change, trying out different styles of beer like NEIPAs, while rural regions are more traditional. Benedikt grew up in a small village where, he says, 80%-90% of people drink the same beer. "They start at age 15 or 16 and continue to 85 or 86, never changing the brand!" While tradition is clearly strong, signs of change are evident in larger urban areas. "It's very much an old mentality to just stick to one brewery", explains Mark. "Every weekend now, there's an ad for a beer at €10 a case and, if it's half way decent, people will buy it!"

"There are so many young brewers now who just want to talk about craft beer!"

Training programs in Germany, whether delivered through apprenticeships, private brewing schools or Universities of Applied Sciences all teach traditional brewing techniques along with other styles. Brewing schools also have pilot/research breweries which, as Benedikt describes, allows "young brewers to push boundaries and try out new things, while still being trained traditionally according to the Reinheitsgebot."

"Older generations often don't know that concentrates can be used, but when they try the beer they're surprised by how good it is!"

Döhler is one of the world's leading technology-driven producers and suppliers of natural ingredients for the food and drink industry. They offer solutions for businesses of all sizes from large, established breweries to small start-ups, blending tradition with innovation. These include wort concentrates, which lie within the German Purity Law and can provide a useful solution for craft brewers where lack of premises space or the cost of hops are primary concerns.

Daniela Meisenheimer and Steffen Prösl explain further: "Our wort concentrates, hopped or unhopped, form the base for beer and the customer just needs to dilute with water, add yeast and ferment. So together with different yeasts and dry hopping for example, many different types of beer can be produced that adhere to the Reinheitsgebot."

Daniela feels that taste profiles have changed considerably. "They're much more diverse than before and this is certainly true in Germany with women's taste profiles being increasingly taken into account now."

Amanda Barber, Key Account manager at Döhler UK, offers some further insights into the female market. "For women, the craft beer trend goes alongside the low-to-no alcohol beer-mixes under 2% ABV and especially towards fruity, easy drinkable products. Cloudy Radler (including the non-alcoholic version) was one of the strongest growth drivers in 2018 and is very popular among female consumers, as it's fruity, juicy and not too 'beery' with lower alcohol content. There are also many beer-mixes with exotic fruit flavours like passion fruit or mango entering the market."

It's evident that the German Purity Law remains of huge importance and relevance, but consumers are also benefiting from the rise of craft brewers and the choices these bring. According to international craft beer awards organiser and publishing house Meininger Verlag, whose portfolio includes a dedicated craft beer magazine, "the number of bottle shops has grown, as well as tap rooms or pubs where you can taste different beers. Also, we are now seeing restaurants with sommeliers who can provide information on each of their beers."

A craft beer shop in Nuremberg.

While the craft beer revolution is undoubtedly more developed in the US and the UK, there are plenty of signs that Germany, perhaps the most traditional beer-producing country of all, is embracing this phenomenon enthusiastically. The flexibility in the brewing process and the resultant flavour profiles form an exciting development within the nation's beer culture. However, it's equally clear that the Reinheitsgebot isn't going anywhere and is still seen as integral to Germany's brewing quality and heritage. Tradition and modernity can live happily side by side!