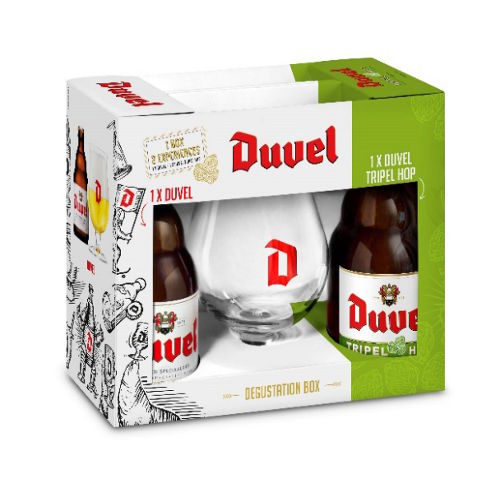 If you're struggling to find the perfect seasonal gift for a beer lover, then look no further! Duvel, the iconic Belgian brewery and winner of Gold in the 'Strong Blonde / Golden Ale' category at the Brussels Beer Challenge 2018, may have the answer for you. Duvel's Devilish Duet Gift Pack contains a 330ml bottle of their Belgian Golden Ale, a 330ml bottle of their Tripel Hop 'Citra' and that famous Duvel-branded tulip glass. Set to gain more listings in the run-up to Xmas, the pack is currently available to purchase online from selected retailers (RRP £12.99).

Jean-Leonard Moortgat, descendent of a long line of Belgian brewers and his wife Maria De Block founded the Duvel Moortgat brewery in 1871. Since then, Duvel has been family-owned and family-run with the fourth generation now at the helm. After the First World War and influenced by English ale styles, one of the founders' sons procured a specific strain of yeast from a Scottish brewery and to this date, Duvel's yeast is still cultured from the same strain. In order to commemorate the end of the war, a new beer was created. Initially called Victory Ale, the name was changed in 1923 in response to a local notable's description of the highly aromatic beer as "a real devil (duvel)" and so the name stuck! 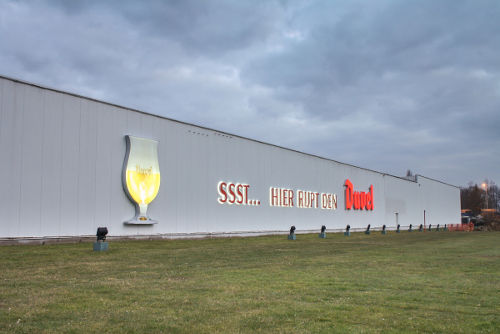 In the 1960s, the tulip-shaped glass was invented, the first ever to hold the entire contents of a 330ml bottle and specifically designed to offer a more complete experience of the beer. Its rounded shape accentuates flavours and aromas, while the way the glass narrows towards the top helps retain carbonation, preserving the beer's head.

Duvel's standard golden ale is anything but a standard beer. The late great 'Beer Hunter', Michael Jackson, described it as a beer of "astonishing sophisticated character: beguilingly pale, flowery and soft-tasting". It's a strong pale ale in style (8.5% ABV) which has been brewed over 90 days using aromatic Bohemian Saaz and Slovenian Styrian Golding hops. Initial fermentation occurs at 20-26°C, then the beer is matured in storage tanks at -2°C, before being bottled with extra sugar and yeast to begin a two-week refermentation phase at a warmer temperature of 24°C. The beer is then moved to cold cellars, where it continues to mature and stabilise for a further six weeks with daily taste checks. This unique brewing process results in a floral, fruity, dry, subtly bitter, rich and refined beer, which shows notes of sweet and tart citrus, touches of butterscotch, nuts and spice plus hints of yeast and orange peel on the mid-to-end palate. The high CO2 content gives this beer a wonderful roundness in the mouth, accentuated by the tulip-shaped Duvel glass. It's a perfect thirst quencher and an ideal apéritif!

Duvel Tripel Hop (9.5% ABV) is brewed using a third hop. A different variety was used each year between 2010 and 2015 in order to create a unique taste experience and an extra degree of alcohol. However, rather than adding this third hop into the standard boil, Duvel Tripel Hop uses dry hopping, where the extra hop cones are added during the final lagering stage post-fermentation to incorporate delicate aromatic oils otherwise lost in the boiling process, without imparting additional bitterness.

Six Tripel Hop beers later, in 2016, Duvel went in search of the ultimate Duvel Tripel Hop, by re-brewing all the previous Tripel Hop beers. More than 5,000 fans across Europe tasted and voted for Citra, the 2012 option, as clear favourite. Duvel Tripel Hop Citra not only won a Gold Medal at the Brussels Beer Challenge, it was also awarded the consumer trophy at the Zythos Beer Festival. Pouring a beautiful golden colour, the nose is highly aromatic with floral and herbal notes lifting the citrus and tropical fruit character plus a hint of caramel as the beer develops in the glass. On the palate, sweet orange, grapefruit and tropical fruit are balanced by a refreshing edge of bitterness plus a light touch of sweet caramel malt and a tinge of yeasty/toffee creaminess.

With these two beers and the iconic tulip glass, Duvel's gift pack will make a devilishly delightful present for fans of la bière belge!